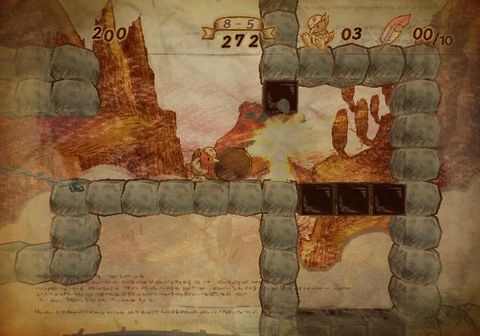 The concept of Ivy the Kiwi is sound %26ndash; a Kirby: Canvas Curse-style platformer where you guide an adorable bird through all manner of hazards. Ivy never stops walking, and you can't control her directly. To get her to go where you want, you point with the remote while holding the A button to draw vines on the screen that she'll walk on, which you can use in a number of ways.

Above: If you draw the vine even slightly too low, Ivy will turn around and run the other way

Drawing a sloped vine in front of her lets her walk over otherwise impassible steps and pits (she can't jump on her own), and you can even scoop her up and fling her forward by starting a vine near her and swinging it up behind her to push her. There's also a slingshot mechanic where you hold the B button over a vine you've already created and pull it back while Ivy is on the vine to slingshot her through breakable blocks and enemies.

The problem is, the controls are much more suited to the DS than to the Wii. Drawing the vines often requirescareful precision, where if you're only a few pixels off in drawing your line Ivy won't do what you want her to do. When it works and you pull off a string of awesome vines, Ivy flies through the level gracefully and it's totally awesome. But when you draw one vine a tiny smidge too low and Ivy turns around and bumps into an enemy (and everything is a one-hit kill, by the way), it's easy to get annoyed very quickly. The motion controls aren't a deal-breaker, but the Wii version is definitely more awkward, more frustrating, and way more difficult (and not the good kind of difficult) than the DS version.

Above: Yes, each of these water droplets is aone-hit kill

We'd totally embrace the difficulty level if it came from clever and challenging level design rather than awkward controls, but that isn'tthe case here. Not to say the level design is bad by any stretch, but most of the 100 levels are designed to be remarkably straightforward if you're not going for collectibles %26ndash; 10 feathers are scattered throughout each level to collect %26ndash; and incredibly difficult if you are trying to get all of them.

Aside from the difficult motion controls, the actual mechanic of using vines to guide little Ivy through each level works well. The most rewarding part of playing Ivy the Kiwi is discovering how to use the vine mechanic on your own %26ndash; the game definitely doesn't over-tutorialize you, which is a frequent crime in modern games, especially games with such as novel mechanic as Ivy's. When you first start drawing vines, your instinct might be to just draw simple slopes to lead Ivy above obstacles, but there's actually a lot more you can do by creatively moving the vine around Ivy as you draw it. Big kudos to Ivy the Kiwi for not killing the joy of discovery by overexplaining.

Above: You can have three vines going at any given time

As for the multiplayer, don't bother. It's a simple splitscreen race to see who can finish each level faster, where each player can also draw vines on the other players' screens to mess them up. The splitscreen exacerbates the already annoying control issues, and unless you have a truly massive TV screen, playing with more than two players is prohibitively annoying.

That's not to say that this game isn't a good choice to play with a friend %26ndash; we'd actually highly recommend playing the main single player game and just take turns handing the controller back and forth. That way, the inherent stress of babysitting a kiwi that never stops running and your inevitable annoyance at the controls will be mitigated by being able to take a break when you want to.