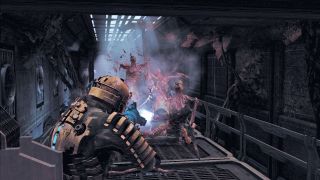 Asteroid defence cannons. On-board tram networks. Oh, and devout cult members turned Necromorphs. The dank, blood-drenched halls of the USG Ishimura is full of surprises, all of which helped to solidify Dead Space’s planet-cracking vessel as one of videogame horror’s most memorable haunted houses.

Chief amongst such hellish treats, however, was protagonist Isaac Clarke’s method of dispatching the ship’s reanimated inhabitants – a makeshift toolset that served to buck the survival horror trend of having players be ill-equipped. Because in Dead Space, you have the exact weapon you need right from the off: the fabled Plasma Cutter.

Who knew that a game, let alone the first entry in a new series, could be defined so much by the player’s primary method of attack? The folks over at EA Redwood Shores (later known as Visceral Studios) did, and in doing so orchestrated the best means in which players could creatively let loose against any insistent monster rampaging towards them. It was called ‘strategic dismemberment’ and required players to forget what they’d been taught and avoid aiming for the head, instead making use of the Plasma Cutter’s capacity to shoot in vertical and horizontal lines of energy to blast off limbs and appendages.

A design for death

It helps that each kind of Necromorph you come across has been specifically designed around players having this ability. Whether popping up from a grate beneath your feet or bombing at you through the air via zero-G, Dead Space’s misshapen meat bags all resemble a Jenga tower just waiting to be taken apart piece by piece. A good example of this is the Lurker enemy type, which is no stranger to implanting itself somewhere above you, only to unleash a trio of whippy barbed tentacles from their back. Is it extremely convenient? Yes. Does it make them incredibly vulnerable? Of course. But it helped to enhance the idea that you’re an unlikely hero making the best of a bad situation.

In this way, Dead Space broke the rules of what it meant to play an everyman stranded in a survival horror setting. The game’s executive producer, Glen Schofield, made it no secret just how heavily the team was influenced by Resident Evil 4 during development, but even Capcom’s classic failed at making you feel helpless in order to guarantee scares and a sense of dread. Dead Space, on the other hand, managed to retain that feeling – all while making you feel empowered thanks to those great dismemberment tools.

While it’s true that many may have witnessed Dead Space’s brand of cold, industrial sci-fi mixed in with gruesome body horror before in other bouts of fiction, this workman-like approach gave the act of dismembering foes a tactility. It translates to everything, whether it’s in how Isaac’s shoulder shoots back due to recoil whenever he shoots, to how Necromorphs stumble onto the ground as a result of where you’ve hit them. There is nothing like clearing out a room full of foes, going on to retrieve the key item you need, then backtracking through that same area to look upon the chaos you’ve wreaked only a few moments earlier.

As the series went on, more weapons and new enemy types would be introduced to offer players fresh ways to merge strategy with slaughter. Whichever way each tried to reinvent Dead Space’s classic shoot-and-slice combat formula, however, at the core of it remained Isaac Clarke’s trusty Plasma Cutter. This, combined with the ability to temporarily freeze enemies in their tracks via a doohickey known as the Stasis Module, helped keep encounters deceptively simple. Only those brave enough to finish the game this way, using the Plasma Cutter and no other weapon, would receive the ‘One Gun’ Achievement.

While the survival horror is currently undergoing somewhat of a renaissance, largely due to Capcom returning the Resident Evil series back to its roots with the RE2 remake, I can’t help but feel that looking back will only get you so far. In 2009, Dead Space was this giant leap forward for the genre thanks to a host of mechanical improvements and reinventions. Setting its doomed hero amongst the stars instead of reality allowed Dead Space to spin up new ideas that made survival horror feel scary in new ways – the ability to dismember enemies being the exemplar. Sadly, with Visceral Games no longer around, we can only hope that someone else is up to the task.

This feature first appeared in OXM. For more excellent features the one you've just read, don't forget to subscribe to the print or digital edition at MyFavouriteMagazines.