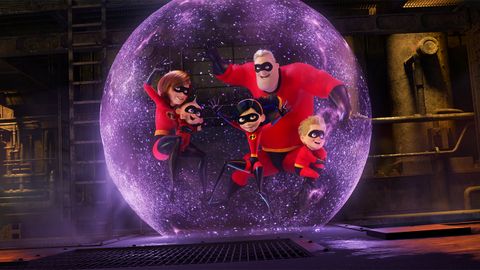 Be sure to make family time for Bird’s flawed but dazzling sequel. “Superheroes suck,” says Violet. No, they most certainly don’t.

The world has changed a lot since The Incredibles. Not the world shown in Incredibles 2 – set directly after the first movie, this sees our spandex-suited superfamily still foiling bad guys in the early ’60s and still frowned on by government and public alike – but, y’know, the real world: superhero movies have now conquered the multiplex and a cartoon villain has made the White House his lair.

Both of these developments, each bigger than Giant-Man, impact returning writer-director Brad Bird’s belated sequel to his 2004 original. So while the set-pieces really are incredible, as effervescent as anything seen in Marvel’s 20-film canon, watching a runaway hover train brought spectacularly to heel just isn’t fresh in the way that superheroes saving a city from a giant robot was before Iron Man landed. And, as for the Trump influence, Bird strains a little too hard to make the franchise great again with regular nods to real-world politics: banished ‘Supers’ treated as second-class citizens and termed “illegals”; talk of media being used to feed lies to the duped masses; and an on-the-nose line of dialogue stating, “People have more faith in a monkey throwing darts than Congress.”

Yet despite the first Incredibles feeling newer and, ideas-wise, more focused in its tale of dreary domesticity rubbing up against wacky world-saving, this is terrific. For starters, who wouldn’t want to share in the further adventures of the Parr family – Bob/Mr. Incredible (Craig T. Nelson), Helen/Elastigirl (Holly Hunter), teen daughter Violet (Sarah Vowell), young son Dash (Huck Milner) and baby Jack-Jack (Eli Fucile) – while the soap-opera nature of their mundane day-to-day tasks invites serialisation. Spider-Man certainly didn’t mean changing nappies, separating reds from whites and buying triple-A batteries when he spoke of great responsibilities, but these guys know what it truly takes to keep the world on its axis.

Opening with a thrilling set-piece as the heroic clan take on the Underminer (Pixar stalwart John Ratzenberger) and his gigantic corkscrew drill, we soon see that little has changed: no-one appreciates the intervention, the bank that was being taken down was insured anyway, and the program keeping our Supes suited is closed down. Deliverance arrives in the form of telecommunications company DevTech, with CEO Winston Deaver (Bob Odenkirk) and his tech-savvy sister Evelyn (Catherine Keener) convincing the Parrs they just need a little PR spin to shift perception. But having analysed the numbers, DevTech only wants Elastigirl (Mr Incredible is “too messy”), furnishing her with a sleek grey-and-black suit, a sleeker motorbike that splits apart so she can stretch her torso and pull off corners that London’s bendy buses could only dream of, and in-suit cameras to show the public the whole story. While Elastigirl’s off fighting Screenslaver (Bill Wise), a foe who controls people’s minds via, you guessed it, screens, Bob becomes the stay-at-home dad charged with coaching Violet through boy troubles, relearning maths for Dash’s homework and training Jack-Jack to control his polymorphous superpowers.

A glimpse of said powers were provided at the end of The Incredibles (and in 2005 short, Jack-Jack Attack, available on the DVD), but the full range will not be spoiled here. Suffice to say they lend Incredibles 2 many of its best gags – an unexpected sneeze can bring explosive results – and its standout set-piece: Jack-Jack discovering his abilities while tussling with a trespassing raccoon. It’s a rum, rollicking ruckus, like Tom and Jerry leaving it all out on the floor of Q’s workshop, and the visual wit and invention are signature Bird – see also Elastigirl on her motorbike speeding under a monorail, a pursuit that recalls The French Connection though Popeye Doyle never ploughed his vehicle through buildings, over rooftops and onto the top of the thundering train.

Incredibles 2 is not the Godfather: Part II, The Empire Strikes Back or Terminator 2: Judgment Day of animated sequels; it is not, in fact, the Toy Story 2 or Toy Story 3 of animated sequels, lacking that all-important emotional undertow (odd given that Bird made the heartbreaking The Iron Giant) and laboured in its adult messages. The gender-swap career/parent dynamic feels a little obvious, Screenslaver is no match for the original’s oh-so-prescient toxic fanboy Syndrome, and there’s a twist you can see coming from outer space. But it is a blast, brilliantly animated and furious fun from first frame to last. And we haven’t even mentioned Bird’s movie-stealing cameo as everyone’s favourite fashionista Edna Mode…

Be sure to make family time for Bird’s flawed but dazzling sequel. “Superheroes suck,” says Violet. No, they most certainly don’t.