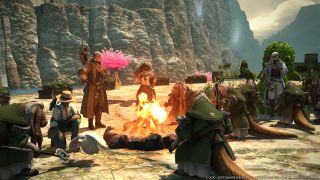 In spite of a disastrous launch, Final Fantasy 14 Online has fast cemented itself as one of the most significant and successful live-service games of the decade. This isn't through some stroke of luck, nor is it something that can be explained away by a simple story; the legacy of Final Fantasy 14 is as messy as it is fascinating. It's a tale of resilience, and of how creative director Naoki Yoshida and his team at Square Enix were humble enough to recognise that what was once broken can still be put back together again.

After Final Fantasy 14 failed, Yoshida-san took his team back to the drawing board. He tells me they played World of Warcraft inside out, top to bottom, trying to understand what makes up a successful MMO. They dissected every single detail that worked, and, more importantly, every single function that didn't. Eventually, they came to the conclusion that Final Fantasy 14 could be saved. And after that, they decided to try all over again.

Rather than keep this intention confidential within the studio, Yoshida arranged a livestream and announced to fans that he recognised the claims that were often made against Square Enix: that as a company it was seen as stiff, arrogant. That's not the case, he explains to me now, as he reflects on a tumultuous period of his life. And about a year after closing the servers for Final Fantasy 14 in 2010, his team launched A Realm Reborn – a rebirth in more ways than one. Compared to its original form, A Realm Reborn was a totally new entity born from the same ether as its predecessor – out of a recognition that there was space for a serious contender to World of Warcraft to emerge – but it was fundamentally different too, thanks in no small part to a certain philosophy that has helped guide Yoshida's creative vision.

"Consider a steakhouse," Yoshida tells me. "If you're planning to open a restaurant, you've got to get a feel for your competition first – if there's a fancy steakhouse around the corner that's the talk of the town, clearly they're doing something right. So you look at their formula – quality cuts, red wine, a decent atmosphere – and you think, well that works. But where's the hole in their philosophy? What could be improved upon? Say their reds are French or Italian – what if you, for example, imported a range of heady Californian wines instead?"

Stick with me here, because this is actually an analogy for MMORPG development. If you take that complex acronym and slice it straight down the middle, you're left with two constituents: an MMO, and an RPG. The steakhouse formula is the MMO: before Final Fantasy 14, you had World of Warcraft, a quintessential phenomenon in MMO history. That's why Yoshida and his team played Blizzard's behemoth inside out: to get the MMO part down to a T.

Then you've got the second part, the RPG. Do you serve price cuts of filet mignon, or are you more of a rootin' tootin' ribeye joint? Paying special attention to the RPG side of your game is where you get to add flavour and character, Yoshida tells me, explaining that it's here where your niche truly comes into play.

There's a reason for Yoshida's drive, his perseverance to reopen a steakhouse-esque Final Fantasy 14 after the original game fumbled the launch. Years before, he was a massive fan of Diablo and Ultima Online, but explains that online gaming wasn't particularly popular in Japan.

However, his love for these games convinced him that there was room for an online title in the Japanese market. This conviction was what led to the arrival of Final Fantasy 14 – you see, that's where the niche, the Californian wine, lay. The Final Fantasy franchise is story-driven by nature, and has a whole world at its behest, similar in scale to Tolkien's legendarium, or the blood-drenched history of Westeros' warmongering.

When you take an IP as opportunistic as that, you automatically instil hope in fans of the series. It doesn't matter if it's online or offline: this is a Final Fantasy game at its core, and that in itself marks it as distinct from other self-contained worlds. In the same way that the World of Warcraft universe now exists across a range of games in a variety of genres, a Final Fantasy MMO is inherently charged with energy derived from all of its eponymous iterations. That's what Yoshida needed to embrace if he was to get Final Fantasy 14 right the second time around.

Learning from past mistakes

Even that wasn't enough to  prevent the heartbreak that followed in the wake of Final Fantasy 14's original launch. Yoshida explains that "failure is not a glorious thing," adding that Final Fantasy 14's journey "can actually be seen as a comeback story". Even now, as he spearheads a much more successful version of Final Fantasy 14, he seems acutely aware and slightly upset about its past issues. However, his team took that failure and learned from it, making an almighty comeback that it has since become globally renowned for.

To Yoshida, everyone involved in Final Fantasy 14's redemption arc – whether it's the players, the team, the fans – they're all like-minded at their core. They have a love for Final Fantasy and the rich lore that comes with it, and naturally they want to see it prosper. That's what turned an ostensibly irreconcilable 2010 failure into a visibly dominant 2020 success: shared passion and an undying belief that it could, and would, be better. Those were the grapes they crushed into extraordinary wine.

Will Final Fantasy 14 Online ever arrive on Xbox? Phil Spencer believes it's only a matter of time before the famed MMORPG makes the leap.

That's why Yoshida-san also owes the game's change of fate to the dedicated community that serves as the backbone for Final Fantasy 14: A Realm Reborn. They believed in the team's vision, believed it could still be saved, and, as a result, bore witness to miracle after miracle throughout the game's redemptive arc. In Yoshida's eyes, it is the community that allows him and his team to continue making A Realm Reborn and expanding it. It is their commitment, their vigilant support, that makes it worthwhile, and ensures there is a game to work on in the first place. "The community were with us for the duration," Yoshida continues. "Over the years, they witnessed these miracles happening. Because of their support, we can continue creating the game."

A rebound trajectory like that of Final Fantasy 14 is unprecedented in the history of online games, and that's what makes the game's development story so spectacular and distinct – especially now looking at the overwhelming success of 2019's expansion, Shadowbringers. It's a game that burnt to ashes and rose again, like a magnificent phoenix, spreading its wings and taking flight for the world to admire.

Will Final Fantasy 14 make the jump to PS5? Square Enix hasn't said one way or the other, but here's all of the upcoming PS5 games that we know about so far.