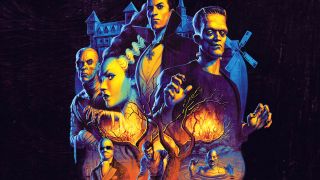 It's hard to feel nostalgic when Dracula's pissed off and bearing down on you like a literal bat out of hell, but somehow, the Horrified board game manages it. This is a love-letter to classic Universal Monsters, the sort who want to suck your blood or raise the dead for the hell of it. However, it's not slavish. Despite a clear affection for the source material that results in some cool flourishes (much like the Disney Villainous board game or Jaws), Horrified doesn't rely on rose-tinted goggles. It's got the gameplay to match and is one of the best cooperative board games we've played this year as a result.

As you'd expect, things begin on a dark and stormy night. A pair of old-school boogeymen are descending on the most gothic village imaginable with carnage in mind, and you're the only thing standing between them and their would-be victims. Your objective? Find a way to destroy these icons before they can obliterate the townsfolk. However, it's not an easy task. There's a unique strategy for defeating each one of the Universal Monsters (destroy Dracula's coffins, for example), and you'll need to gather items from across the board to do it. What's more, you'll have to balance doing so with saving residents. Those unlucky souls may be drawn into the firing line thanks to event cards, leaving you to escort them off the board before they meet their doom.

Those event cards also dictate which monster moves and how strong it is if it attacks, so you're never sure what's coming. The only thing you can be sure of is the fact that they're always moving toward the nearest hero or villager. This makes them feel intimidating and unstoppable, giving the Horrified board game an edge. These creatures may be hammy, but they're no cake-walk.

That leads to some memorable encounters. If Horrified excels at anything, it's the 'trolley problem'. This is a situation where there is no right choice, and the game is at its best when it forces you down that rabbit hole. Let's say Dracula is swooping in from one side to feast on an unlucky someone. Meanwhile, a Creature from the Black Lagoon has cornered more villagers. You've only got time to save one, so someone is going to die regardless. Oh, and if you don't ignore both in favor of your objective, you may lose the game. What do you do? It's the sort of juggling act that makes Horrified enjoyable. Is it one of the best board games of 2019? The jury's still out, but I've had a lot of fun with it so far.

In some ways, Horrified reminds me of the Pandemic board game - there are plenty of ways to lose and only one route to victory. If too many villagers are killed, your 'terror' tracker goes up. Once it reaches a certain number, you're through. Equally, running out of cards also spells game over. That makes it a good co-op experience because you'll need teamwork to make it past the finish-line. The pressure's on; hashing out a desperate plan keeps it exciting (it doesn't suffer as a board game for 2 players, either). And if you've mastered one set of monsters, you can always move on to another, harder pair.

This is part of the fun - exploring the mechanics behind a new baddie. It's a deep game with layers that can feel intimidating at first due to the sheer volume of stuff inside the box, but it's not actually too complicated. Happily, all that 'stuff' is exceptionally well-produced. It's richly colorful and evocative of those old creature-features, right down to creepy laboratories and lightning-struck castles. In addition, the monster miniatures are detailed, each character is made from thick, pleasantly weighty cardboard, and the items are stored in a black velvet bag. Simply put, it's a pleasure to use.

That's Horrified all over, to be honest. Who knew that the undead and bloodthirsty killers could be so appealing?

Want to play something new? We'll be here each week to let you know about a tabletop gem - like Marvel Champions: The Card Game, Betrayal at House on the Hill, or the Gloom card game - that you should try.