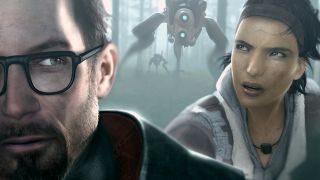 A new Half-Life game is in the works at Valve, according to a number of rumours, reports, and leaks.

Why Half-Life 2 is still the greatest FPS ever made

Another user on Reddit has also stated that Half-Life: Alyx (named after one of the central characters of the original series) will be announced this Wednesday, and is a "VR continuation" of where Half-Life 2's events ended. Prominent Half-Life internet personality Tyler McVicker is also hosting a stream on Wednesday.

Incidentally, a number of developers at the Valve acquired studio Campo Santo have recently changed their Twitter bios, suggesting that they're no longer working on the previously announced adventure title In The Valley of the Gods, but an undisclosed project within the company. Could this be this reported Half-Life follow-up? Or could In The Valley of the Gods be getting a rebrand? There's clearly plenty going at the Bellevue studio at the moment.

Either way, we could hear more from Valve officially this Wednesday, or next month during The Game Awards itself. Considering the well-documented wait for a follow-up to Half-Life 2: Episode 2, the internet is sure to be keeping a close eye on all Valve news over the next few weeks.