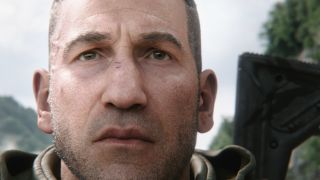 Ghost Recon Breakpoint is so macho I almost grew testicles while playing it. Of course, the series has always been a hoorah mix of special forces action and big explosions, but in Breakpoint Ubisoft wants to push its operators to their limits, with stress, fatigue, hunger, dehydration, and injury all just as important as the size of their guns. According to writer Emil Daubon – who served 14 years as a United States Army Special Forces Green Beret himself – it's about going behind the Ghost myth to see "how much can you push the Ghosts before they break?"

The game starts with your character surviving a helicopter crash on an island called Aurora, the home of Skell Technology. Its founder Jace Skell has developed AI drones that can be used for medical procedures, to pollinate flowers like tiny shiny bees, or – you know – for merciless assassinations. Luckily for you, there isn't a band of rogue special operatives called the Wolves – led by Cole Walker, AKA Punisher's Jon Bernthal – out there who are using the technology for nefarious reasons. No, wait, sorry, there is. Yes, there is a band of poncho-wearing, masked mercenaries who are hunting you down across the diverse terrains of Aurora. Bugger.

Yes, it the same Cole Walker who recently appeared in the DLC for Ghost Recon Wildlands as an ally, just to set you up for that real sucker punch of betrayal for Breakpoint. He's an obvious choice thanks to roles in massive shows like The Walking Dead, The Punisher and movies like Baby Driver, and proved a natural in the role of Walker.

"In the end, working with Jon Bernthal was quite easy because he's super professional," reveals the game's UX director Matthew Tomkinson. "He's very humble and super fast at knowing his lines and he brings something with him to recording sessions. Everyone was like 'OK, that's Jon Bernthal, let's make it good' and they were all super serious and super efficient.' It brings a lot of ambition to it, knowing that we have to live up to the legend he is and it's been an inspiration for all of us."

Survival of the fittest

Of course, the game still has its trademark "leashless" four-player co-op, but the idea is that you'll be forced to improvise in Breakpoint. One of the new features is the bivouac, which lets you set up a little camp as a sad and secure location. Here you can eat, drink, and get a temporary buff by performing an action like checking over your weaponry. You'll also want to use this time to craft items like bandages, and heal any injuries you've sustained in the field. Failing to address these injuries could slow you down and affect your success in any conflict.

"We wanted to insist on this military survival feeling," Tomkinson explains. "It's not only about the fight, it's also about the time you spend going around in the world and exploring, being tired, being injured, spending time with your friends in a bivouac. All these feelings were something that we wanted players to experience. I think it'll have a darker tone, it's true, but also at some moments a slower rhythm and pace, but as you see in the battles, it creates a big contrast and that can be very powerful for the players."

You can also choose your skillset for the next mission while in the bivouac – like the Panther for more stealth focused abilities – and set when you're going to break away from the camp. Do you want to wait for rainy weather? Or nightfall? The choice is yours. One thing that was clear was that working with the environment is going to be crucial for your success. The setting of Aurora has everything from grassy plains to snowy mountains and – of course – an active volcano.

The greatest lava story ever told

"When you're recreating a country, like we did with Bolivia, it's interesting because you have to learn very deeply about it. I really enjoyed that process, but here it's a totally different take because we started with a 'what if?' What if a Silicon Valley giant decided to create the world 2.0?" says Tomkinson.

"It's like we're imagining the future. We still have this very hostile environment, very colorful – nature is still very important to us – but we're building a new ecosystem and we spent lots of time thinking about the logic of it. We have the cities and the drone facilities but all the island is self-sufficient, so we placed things very logically. Resources to build the drones, how they transport it, all of that was really fun... we want to do the most awesome stuff possible. With the volcano, we are trying to push how far can we go while still staying realistic."

Ghost Recon Breakpoint will have PvP at launch with shared characters and progression. Post-launch we can expect story content, co-op raids, and events.  We saw a montage of waterfalls, oil rigs style platforms and the volcano, which promised to be excellent playgrounds for endgame activities.

The area that we played in was grasslands but I can attest to some real A-grade wind rustling through vegetation, and the glimpses of the jungles and beaches and glowing lava promised plenty of challenges. One new feature that takes advantage of the world's many terrains is prone camo, letting you slather yourself in mud (or sand or snow or grass) – Predator style – to prevent detection. A small addition, but oh so satisfying. "It's the fantasy of being totally invisible, like a ghost," says Tomkinson.

As operatives trapped on the island you'll need to do your own intel, and we got a taste of it during a very brief hands on. In a team of four, we were entrusted - perhaps unwisely - with extracting a scientist from one of the Skell facilities. The first step was setting up a bivouac, crafting healing syringes, making sure everyone was fed and watered, and choosing our classes. I went for Panther, because it felt like a hostage situation would benefit from some stealth skillls.

Eye of the panther

We broke camp - opting for a bold sunny afternoon to approach - and headed for our target's location. Someone whipped out the tactical binoculars, marking guards and locating the scientist in her office at the top of the building. There were lots of civilians who can get scared and raise the alarm, so we begrudgingly went with a stealth approach, sending in a drone for a more aerial view and hunting for quiet paths through the shiny white buildings. To really show we knew how to play nicely in groups set up a sync shot to take out a number of guards at one – if you're a solo player you can do this with drones – and then used a breaching kit to cut through the fence.

Ubisoft unveiled plans for a set of two new story missions called Operation Oracle last week: they star Jon Bernthal (AKA The Punisher) as a fellow Ghost. Read more about it here.

On paper, this all sounds a bit like crossing off items on a prowler's to do list, but it felt great. Improvising our approach as a team - the game's new survival feel means a move away from the big briefings ahead of a mission - and the deeper dialogue options and story felt like a significant step forward from Ghost Recon Wildlands.

Of course despite our solid skills and a tiny bit of coaching from the developer babysitting our group, it still got very complicated very quickly. First the scientist got injured in a battle with a drone, so someone had to carry her fireman style through the rain of bullets, and then we got a secondary objective to sabotage the factory. Then, because bad luck comes in threes, a sort of wheeled robot drone rolled up and it was not there to deliver our groceries. It all climaxed in an encounter with one of the Wolves, Flycatcher, and the sort of massive firefight that gets the blood pumping in your trigger finger. It all felt smooth and intuitive and satisfying, even if I'm more of a 'crash a helicopter into the building while laughing maniacally' sort of Ghost Recon Wildlands player. If Ghost Recon Breakpoint can actually make me enjoy stealth, and serve up some smoking hot Jon Bernthal at the same time, it definitely deserves a spot on your Amazon wishlist.

Ghost Recon Breakpoint will be released on PS4, Xbox One and PC on October 4. Find more to get excited for in the near future with our list of E3 2019 games to expect this year.