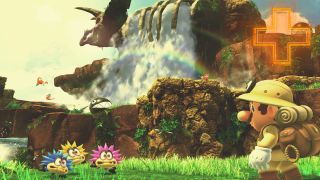 We're celebrating the end of an incredible decade for games, movies, and TV shows. Super Mario Odyssey is one of the games that defined the last 10 years of play, placing 11th in our 100 best games of the decade rankings. Read on to find out why...

For a game series so steeped in nostalgia and fan expectation, Super Mario has always struggled to break too far from it's expected norms and decades-old formulas. But Super Mario Odyssey excelled because it managed to break free from its own nostalgia to push the series into unknown territories. Quite literally.

For the first time, Mario travels away from his beloved Mushroom Kingdom and its familiarities, jumping into a balloon for a worldwide adventure. It's hard to sum up quite how weird and wonderful the locales of Mario's odyssey are. It's an almost hallucinogenic experience, where lands can be populated by sentient cutlery, rabbits wearing top hats, and giant T-Rex. And let's not forget New Donk City, a spin on New York City where Mario meets real humans for the first time, looking like a cartoon, chibi iteration of humankind as he basically waddles around the city looking more alien than ever.

It's this huge departure from the norm that makes Super Mario Odyssey so special though. Gone are the mushrooms, the Tanooki suits, the fire flowers and power-ups of old, instead replaced by a hat – with eyes – capable of possessing the equally strange creatures that make up Odyssey's world. Sorry Nintendo, I meant "capturing". It means that gameplay sees you move from being a catepillar that stretches like an accordian, a steak, a statue, a pair of binoculars, electricity and almost everything you can think of in between, including a range of Mario's long-serving enemies.

Despite the fact Odyssey will see you flicking, throwing, jumping on and leaping from your new empowered hat, it still manages to maintain the ultimate feel of a Super Mario game. It all feels effortlessly natural and familiar, regardless of it taking advantage of all elements of the Nintendo Switch including Joy-Con motion controls for certain movement elements. Although despite how Mario-esque it feels, pulling off all Mario's new moves in one complete flow makes you feel like you've unlocked a super power.

Players began to discover that by chaining these moves together they could 'break' the game too, discovering areas that they thought they weren't really supposed to access. But Nintendo has thought of it all, greeting players with stacks of coins in those supposedly out of reach areas. Sandbox gaming at its very, and cheekiest, best, positively encouraging and rewarding players to explore continuously.

And that's just heightened by the games vast, vast amount of collectibles too, whether it's Power Moons, musical toads, goombettes, secret kingdoms, desert wanderers or the constantly updated horde of hint art. I've spent more time collecting moons playing Mario Odyssey than I have with some of my family members.

From past to future

That doesn't mean that Super Mario Odyssey is afraid of its past though. It's still steeped in the nostalgia that you'd expect from a Super Mario title, just presented much more subtly. New Donk City is plastered in Donkey Kong references, Mario's unlockable outfits play out like a timeline of his own – and Nintendo's – back catalogue, and there's even a secret Mushroom Kingdom level that's tucked away for players to discover. There are glorious 2D levels too, a NES-inspired 8-bit level, and enough Nintendo references from start to finish to make this feel like one of the best greatest hits albums.

It's this ability to acknowledge its past in the process of moving onto to bigger, and better, futures, that makes Super Mario Odyssey one of the defining games of this decade. Yes, the groundbreaking Super Mario 64, along with Super Mario Galaxy, had moved the Super Mario formula to new realms before, but nothing before has managed to blend old and new quite so successfully.