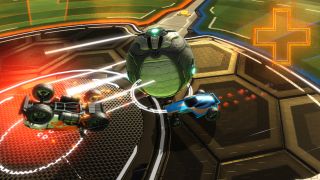 We're celebrating the end of an incredible decade for games, movies, and TV shows. Rocket League is one of the games that defined the last 10 years of play, placing 18th in our 100 best games of the decade rankings.

One of the biggest changes over the last ten years is how we actually get our games. In 2010, we'd happily drop a chunk of cash for games such as Red Dead Redemption, Mass Effect 2, and Fallout: New Vegas on discs. Now though, we're picking up games with reckless abandon for much less and more regularly. Whether it's grabbing gems such as Titanfall 2 in this month's PS Plus games or just going carte blanche with the Xbox Games Pass, the expectation is that, big or small, the way we get our games has changed. No game better represents this move to gaming's future than Rocket League.

Let's put this argument into reverse for a moment. Since PlayStation Plus's launch in June 2010, members have had access to the Instant Game Collection, where different games were made available each month for no extra cost, as long as you remained a PS Plus member. Plenty of blockbusters came to the service, but it was also an invaluable treasure trove for people looking to discover indies. In the PS4's early days, games such as Resogun, Towerfall: Ascension, and Outlast, were all part of the IGC, placing these compelling indies into the hands of an audience who might not have tried them out in the past.

None had the same cut through as Rocket League though. In July 2015, the soc-car masterclass flew onto the service and quickly grabbed our collective imagination. The game's core premise – two teams of small cars try to score a goal by ramming into a giant ball - is pure video game nonsense and all the better for it. But, it's also worth remembering that developer Psyonix had already tried to make that concept happen once on PS3, with the terribly titled 'Supersonic Acrobatic Rocket-Powered Battle-Cars'. YouTube footage will inspire a form of deja vu in anyone who has spent about 5 seconds with Rocket League. It also proves why PS Plus was vital for Rocket League's success. People needed to play it to understand it, and that's easier to do when the game is free.

Of course, none of this matters if the game doesn't hold up. But Rocket League is one of those rare ideas that feels like it should have existed long before it had (okay, technically, it did, but you know what I mean). The simplicity of the concept is matched by how accessible the game is. The driving is pure arcadey bliss, giving you plenty of control as you powerslide around the pitch, while learning how to control the ball in the air provides a learning curve that belies the game's initial simpleness. Scoring my first bicycle bump goal in Rocket League had me legging around the room as if I just powered in a header in front of a sold-out Goodison Park.

Back of the net

Plus, no matter your skill level, there was always a way to find a base level of enjoyment from it. Early games are a blur of laughter and delight at just being able to hit the ball, while tactics slowly start to emerge as you get to grips with its systems. A quick watch of the esports scene that sprung up shows just how flexible those simple controls could be. That each skill level was engaging in each its own right has contributed to its longevity, as well as a steady stream of DLC that introduced new modes, cars, and crossovers with pop culture that set a blueprint that Fortnite would, admittedly, improve on.

All of this isn't to say that Rocket League invented digital distribution. But the game's explosion in popularity proved that a great idea could reach an audience through new means. This success helped prove that games can sustain themselves this way, and with the rise of Game Pass in recent years, offered a glimpse at how we'll get our games in the future. The fact it's the best game ever made about cars and football (mashed together) is just a big bonus.