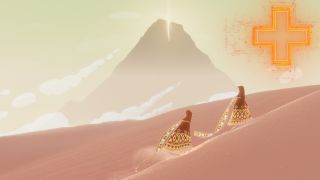 We're celebrating the end of an incredible decade for games, movies, and TV shows. Journey is one of the games that defined the last 10 years of play, placing 10th in our 100 best games of the decade rankings. Read on to find out why...

The monomyth, or hero's journey, has been a tried and true template for interactive stories since the birth of the adventure genre in the 1970s; a three-act play of initiation, obstacle, and resolution that atunes perfectly to the player-worshipping paradigms of the video game format. It's a device so ingrained into the DNA of the medium's storytelling, in fact, that players barely notice its existence, that circular narrative grinding away in the background like the hidden gears of a grandfather clock.

But Journey cares about the hidden gears. Stripping everything but that core monomyth back to its rudiments, thatgamecompany's masterstroke of minimalism channels the sound of silence to filter its universalist messaging into purified gold. By silence, of course, I mean the lack of exposition, text, or indeed any dialogue at all, for who can forget Austin Wintory's stirring score? A stunning work of dynamic sound design, Journey's soundtrack tells an accomplished story all of its own, exemplifying the often understated power of music as narrative language.

There and back again

Thatgamecompany's self-described "Japanese garden" design philosophy, favouring clarity over clutter, celebrates the simple joys of our frantically evolving medium. The lucidity of its experience, one almost completely free from a user interface, allows Journey to frontload its qualities as interactive therapy, anchored by some of the finest visuals of all time (which, by the way, still impress and delight almost eight years later). Everyone, then, remembers their first time playing Journey, precisely because it wasn't quite like anything else we'd experienced before, and partly because most of us were quietly weeping in the corner by the time the credits rolled.

Journey's contributions to games this decade are manifold. Its initial PS3 release saw it become the fastest-selling PlayStation Network game of its time, proving there was a viable path for indie titles on the then still-nascent digital markets of mainstream consoles. It's relative brevity and disavowal of gaming's obsession with conflict was considered risky at the time, but that success has thus paved the way for countless other self-proclaimed "walking simulators" and "zen games" in its stead, from Abzu and Firewatch to What Remains of Edith Finch.

Journey's novel approach to multiplayer, forging momentary friendships between total strangers, is still referenced as a touchstone for developers trying to push the boundaries of online interaction today. Even that iconic mountain glimpsed from its opening moments even appears in Kong: Skull Island, with director Jordan Voight-Roberts admitting that the game is "one of my favorite things... ever".

A journey worth taking

Perhaps most significantly of all, though, new players are continuing to discover Journey to this day, in addition to those, like myself, who frequently return to its calm, resplendent shores whenever the noise of the real world begins to overwhelm. It's one of the true ongoing pleasures of our medium that you can jump into Journey today, and still find fellow robed figures pirouetting gracefully amongst the sand.

What's Journey really about? Everything. Nothing. Whatever you want it to be. Sure, we could conduct a frame-by-frame analysis of the game's various signposts and symbols, stitching together its disparate plot threads via the kind of forensic breakdown usually saved for a Hideo Kojima production, but the true beauty of Journey is that you don't need to understand it to appreciate its power. You just need to feel.