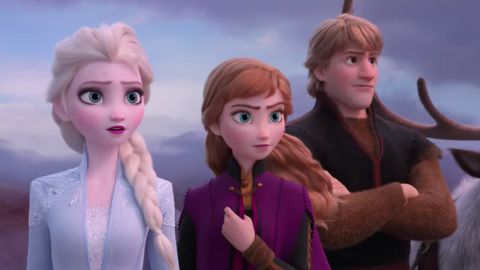 A solid sequel that hits the right notes and entertains without ever being quite as satisfying or essential as the original.

There’s a cute new creature in Frozen 2 – a fiery gecko-like creature that could’ve escaped from Pokémon – that almost sums up the whole sequel. It’s fun, looks great and is sure to delight kids, but you’re never entirely convinced about the point of its existence.

When Frozen opened in 2013, it was a truly unexpected hit, with incredible box-office stamina. It cracked $1bn and became the highest-grossing animated film ever (which it still is, if you’re not counting 2019’s Lion King remake), so a sequel was inevitable. But as entertaining and polished as it is, the story never quite gels as well as the original. By forcing an extension on a pretty complete tale, Frozen 2 doesn’t have the same stakes as its predecessor, and the reverse-engineered story is never entirely satisfying.

Picking up where the last one left off, Frozen 2 finds the Kingdom of Arendelle happily ruled by benevolent ice queen Elsa (Idina Menzel), who finds herself drawn to the call of an enchanted forest. To get to the bottom of this mystery – which has a connection to a story she was told in childhood – Elsa sets off on an adventure with her sister Anna (Kristen Bell), iceman Kristoff (Jonathan Groff), reindeer Sven, and comic-relief snowman Olaf (Josh Gad, once again getting the biggest laughs).

Individually, there are some great moments. The songs of the original set an extremely high bar, and while nothing here quite touches "Let It Go", the musical numbers don’t disappoint. "Into The Unknown", especially, seems destined to earworm parents over the coming months. Kristoff’s tongue-in-cheek power ballad is also a highlight.

And the visuals are stunningly realised – leaves look so damn autumnal you can practically feel them crunching – and a couple of cracking set-pieces. Elsa’s much-trailered journey across a rough sea has a genuine sense of peril, and some new rock monsters have an impressively hefty sense of scale, something that’s not always easy to achieve in animation.

But this time round, the sisterly relationship lacks the powerful arc it had last time, meaning the story isn’t anchored with anywhere near the emotional weight it had before. Any sense of sacrifice or separation feels half-hearted, and too easily undone, and the film wants for a proper villain. It’s also telling that the two best moments involve direct callbacks to the first film.

The new mythology is never entirely gripping, and sometimes verges on headscratching. On top of that, none of the new characters make much of an impact (Sterling K. Brown is a nice addition, but he’s given little to do). So if you’re desperate to spend more time with Anna and Elsa, Frozen 2 won’t leave you cold, but it’s unlikely to set your world on fire.

Frozen 2 review: "Entertains without being as satisfying or essential as the original"

A solid sequel that hits the right notes and entertains without ever being quite as satisfying or essential as the original.