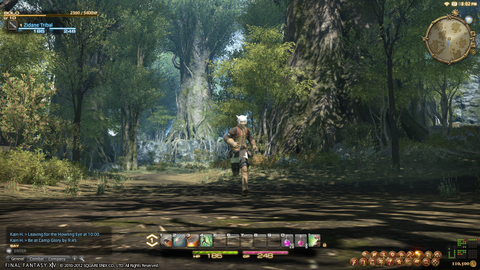 Imagine your living room. Everything’s in its proper place, and you feel right at home – as you should. Now imagine that your living room was directed by M. Night Shyamlan. Suddenly, up is down, left is right, and your potted plant is attempting to drive a knife through your heart while you sleep. Put simply, nothing works, even though it all looks the same as it always has. And that’s Final Fantasy XIV in a nutshell. It seems functional enough at first glance, but as you wade ever deeper, you discover a swampy muck of bugs, quirks, and design decisions that stroll right up to common sense, retch loudly, and then spit in its face.

Above: Final Fantasy XIV opens with epic, cinematic moments like this...

After creating your character from an admirable – though not overwhelmingly large – variety of parts, you’re immediately thrust into a very promising opening. FFXIV’s first ten minutes or so will surprise you just as much as the remaining few hundred hours Square Enix has packed into the game – but for an entirely different reason. By which we mean it’s good. Depending on which nation you choose to call home, you get a different epic, cutscene-driven opening that actually makes you feel like, well, a Final Fantasy hero. Those initial shining seconds highlight one of FFXIV’s coolest features: an actual plot. So there you sit, trembling with anticipation as the game flashes its brightest smile, practically promising you a dream world full of spiky haired pretty boys, giant swords, and giant-er yellow chicken creatures. Unfortunately, it’s not long before FFXIV’s true nature rears its ugly head.

So, the actual game begins. At this point, you’re essentially a baby freshly out of the womb. Here’s the thing, though: FFXIV then proceeds to treat you like a grizzled old veteran. No handholding, no real direction – not even a complimentary bottle or slap on the ass. You’re just sort of turned loose and treated as though you should intrinsically understand the game’s daunting, sometimes mind-bogglingly complex world. Even the main storyline – which seems like the perfect place to insert a semester or two of FFXIV 101 – quickly turns into a dead end with no real indication of how to get back on the right track. Turns out, you just have to wait until you’ve reached a higher level and talk to the same quest-giver again, but the game makes no effort to inform you of that crucial bit of info.

Above: ...and then you get to fight sheep for hours on end

Similarly, FFXIV tosses you straight into the deep end of everything from its daily quest system to its multi-faceted series of stats to its extremely deep and versatile class system, fully expecting that you’ll start swimming laps like you’re Michael Phelps. Instead, however, you just end up confused and angry. As a result, our brawny Pugilist/Gladiator’s most powerful weapon wasn’t his arsenal of mighty blades; it was a friggin’ Google search bar. Now, any time we click into the thing, its auto-correct immediately overflows with “Final Fantasy XIV stats,” “How to craft in Final Fantasy XIV,” “What do Final Fantasy XIV elements do,” “Why am I still playing Final Fantasy XIV,” and so on and so on and so on. It’s such basic material, so Square Enix’s decision to hamstring players right out the gate by not divulging any of it is all the more mystifying.

All of that, though, could – at least, in theory – be tightened and tweaked into something resembling working order with a few well-applied patches. Problem is, you can’t very well stick a Band Aid over a bullet through the heart, so it’s a shame that many of Final Fantasy XIV’s flaws are much more than skin deep. For instance, the bulk of the questing system – which unfolds through a series of timed “levequests” – has some serious ups and downs. On one hand, it features multiple difficulties tailored to specific group sizes, making it completely viable to fly solo or bring in an entire rainbow’s worth of colorfully coifed JRPG heroes.

On the other hand, the quests tend to devolve into killing the same monsters or crafting the same items over and over, and you can only take on a limited number of them per day. Also, there’s nothing to them outside of a command to go to location X and kill creature Y. It’s essentially a pre-programmed setting on the level treadmill, with the infamous MMORPG grind so thinly veiled that we have to wonder why Square Enix even bothered. Hourly “behests” – essentially bigger, badder levequests – the occasional dungeon, and high-level class-specific quests spice things up a bit, but ultimately, you'll find more variety in a collection of all two of Garfield's punchlines than you will in Final Fantasy XIV.

Above: You say you're about to go shopping? Oh. That's a damn shame. We'll be sure to inform your next of kin

Similarly head-scratching is FFXIV's complete lack of an auction house – a gaping hole which the game haphazardly fills with its retainer system. Basically, you hire a retainer NPC to stand around hawking your wares, as does everyone else. This, of course, is a recipe for total chaos. Why? Well, imagine a door-to-door salesman. Manageable enough, right? Now imagine a whole herd of the money-grubbing smooth-talkers, all of whom are shouting over each other for you to browse their respective inventories. To top it off, there's no search function to help you identify which retainer has the item you're looking for. So instead, it's up to you to individually click on each and every retainer, praying to and alternatively cursing your deity of choice all the while.

The immaculate golden middle-finger statuette for excellence in the field of “F*** you,” however, goes to FFXIV's interface. It's like a greatest hits of everything you've ever hated about videogame interfaces in general: a near-constant stream of “Are you sure you want to perform this action?” pop ups, ability and armor equipment screens that may as well be in another language, maps that actually are in another language, and targeting that will make you want to kill everything in the world while taunting you for being unable to hit any of it. Even the most basic of actions typically require navigating some absurd labyrinth of menu screens – be it beginning a quest or just attempting to read your journal. It's honestly stunning how little of an attempt was made to give what's clearly a PS3-tailored interface a PC makeover.

Above: Say what you will about the rest of the game, but FFXIV's got enough eye candy to give your eyes diabetes. Eyeabetes?

That's not to say FFXIV is totally devoid of bright spots. One in particular – the game's unbelievably flexible class system – shines so brightly that it seems wasted on such an otherwise abysmal game. In a nutshell, it allows you to switch seamlessly between classes by simply equipping the corresponding weapon or crafting item, which makes diversifying your character's abilities as simple as the rest of the game should have been. The result? Mixing and matching abilities from different classes is absurdly addictive, hearkening back to series high water marks like Final Fantasy Tactics. Combat, then, is elevated beyond its somewhat typical MMO-style “stand still and click away at abilities” format thanks to sheer possibility. On top of that, grouping becomes much less of a hassle because – should you need, say, a healer – a member of your party can just turn into one on the spot.

Meanwhile, the game world is absolutely beautiful – overflowing with lush colors and sights that'll make you want to pick up your computer monitor, stick it in a frame, and nail it your wall. Even then, though, you'll come across trouble in paradise when you discover how limited the world actually is. Sadly, it's just a pretty face, and there's not much below the surface. As a result, exploring doesn't yield much in the way of rewards, so odds are, you'll just stick to your daily routine of repetitive levequesting and crafting. And then you'll log out. And then, one day, you'll probably just decide to omit the part where you log back in.