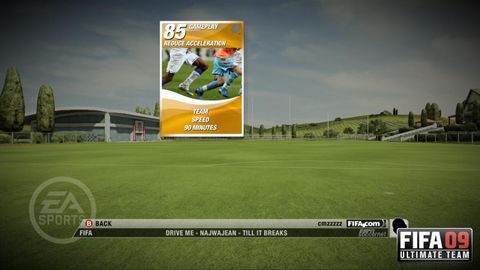 To put it simply in three words: this is ace. FIFA 09 plays a blinder of a game and we are absolutely loving it (as our constant lunchtime and after-work games testify). This is the proper next-gen footy game we've been hankering for since... ooh, this time last year when the previous incarnation demonstrated so much Nani-like potential but then flopped like Ronaldo in the penalty area.

It's fair to say that FIFA 08 came up a little short, but thankfully things are a lot different here - a whopping 250 things different here according to EA's Dan Rutter (the line producer of the game), and to be fair this does play very differently from last year's version. As soon as you start playing you'll immediately notice new things, from the way the ball moves, to the way players fall over, kick the ball, shove, point and more...

Start playing and you'll soon realise that the passing system has moved on and that the quality of your passes really do depend on the abilities of the player you're using - more so than ever before. It makes each player seem much more like their real-world counterpart. If you're using a skillful midfielder such as Wesley Sneijder, the game will be so much easier for you than playing as some rubbishy league two player. (Apologies here to any Football League 2 players - we know you have skill, it's just that your passing isn't always up to the standard of international players.)

Meanwhile, the through ball system has been cranked up a notch. It didn't really work in FIFA 08 - launching an aerial through ball was as good as handing the ball on a silver plate to the opposition. UEFA Euro 2008 saw this rectified so that it began to work as it does in PES. FIFA 09 has again taken that on and improved it so that it doesn't always work, but does so in the right situations and when using the right players, ie, ones good at passing.

One of the other changes you'll notice when you're in possession of the ball is that the crossing has been revamped. FIFA 09's physics system is the best of any footy game yet. And the way the ball moves on crosses and goal kicks is now super realistic. Chipped up floating crosses, huge wellied hoofs down the pitch, skewed, spinning punts from off the shin - they're all here and you'll really notice how the ball moves in the air. Crosses, which have always been one of the best ways to score in FIFA, now arc across goal realistically, dipping in towards the net at the last minute or rocketing past only a few inches away from your stretching attackers.

It makes for some excellent back-post goals that will either have you screaming with exhilaration or cursing at your shambolic defenders who couldn't mark for toffee. Now crosses from the full back or wingers will look like they're flying out of play or into the keeper's hands only for them to swing back in at the last minute for an attacker to acrobatically volley or head home. The crossing is now crisp, believable and makes for some great goals.