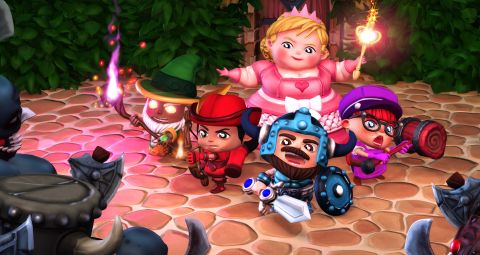 Fat Princess Adventures is colourful and endearing at first, but the proof is in the gameplay pudding. Unsatisfying, flimsy combat and class-specific loot drops make extended play a real grind. Pity.

Fat Princess Adventures has the sugary sweet veneer of thickly layered frosting that, in a cruel twist of fate, has been slathered over a giant slab of polystyrene. The essential ingredients for cooking up a Diablo-style hack and slash experience are sitting unused in a cupboard somewhere, and as you choke on chunks of the white, brittle substitute for moist, delicious sponge, you’ll curse the beguiling saccharine exterior for its betrayal.

If you’re unfamiliar with 2009’s original Fat Princess, you’re in the enviable position of being blissfully unaware of the features that haven’t made an appearance this time around. Gone are the team based multiplayer maps, with modes like Deathmatch and Capture the Flag. What we’re left with is an abridged, isometric ARPG with a single story mode that you can solo, or attack with up to three friends to lend you a hand in saving the kingdom.

The game opens with your arrival at the kingdom, having already been summoned to rescue the two wobbly princesses from the Bitter Queen. You’re thrown into the first boss battle almost immediately, saving the first rotund Royal and restoring peace within the city’s walls. After that, the real adventure begins as you set out to explore the handful of surrounding areas to rescue the second meaty Monarch and defeat the evil queen.

From the outset, the game looks adorable. From the NPCs in the town, to the forests and swamps you’ll visit, the art style is lovely, which makes the oodles of blood spatter that sprays over you and your comrades as you slice, dice, bludgeon, and incinerate your enemies, even more delightful. Those in possession of a weak constitution can crank the gore down a notch or two in the options menu.

You have cake and I scream

Satiate your monstrous appetite by gobbling up cake to restore your HP, and keep on guzzling to supersize your hero in a comical power up that will have you bursting out of your armour and crushing your foes with your big meaty hands. Although short-lived, the huge boost in stats that accompanies your mammoth stature is great for clearing out mobs when you’re in a pinch and it’s worth gorging when you’re at full health for the power boost, rather that saving the slices to top up your HP bar.

The character creator has all of the usual options - cute hairdos, makeup, and a range of skin tones - but as a quirky addition, you can choose between five personality types. Aside from your hero striking a different pose to illustrate the essence of each one, their running commentary during the game will be governed by the personality you pick. So choose wisely, or you may find yourself at the receiving end of an onslaught of smart-mouthed emo quips coming in at a mile a minute.

The maps are littered with checkpoints, letting you switch between the four available classes at each one. You can flip between a Warrior, an Archer, an Engineer, and a Mage, and you’ll almost certainly be doing so frequently. During your travels, you’ll Hoover up plenty of loot - with duplicate items handily transformed into gold when you pick them up - but the weapons and armour collected can be for any of the four classes, so if you do have a preference, you may never come across another piece of armour for them, or you might never find the incendiary staff you were hoping for. Swapping classes really is a necessity when considering enemy affinities and your own loadouts.

The downside to this is that you’re often unable to invest the gold needed to upgrade items for your favourite class, instead spreading it around a couple of classes to cover all eventualities. Upgrading items alters their appearance and properties, but the anticipation of witnessing what your Mage’s staff eventually will blossom into is abruptly quashed when you have to eke out the pennies in a woeful attempt to be frugal.

The story isn't particularly deep, but the lack of narrative clout isn't a problem. I’m okay with being sent off to rescue a princess, and if she can chip in with the slaughter on the way back to her castle rather than becoming a burdensome escort quest upon her rescue, all the better. But it does matter when the combat itself lacks impact. After bashing and blasting a few brains, it’s evident that this combat is undercooked. There’s no weight to it, no feedback. Incessant button mashing as you pick one of the two attacks available isn’t as fun as it sounds. And when it sounds as dull as dishwater, that's clearly a problem.

The enemy AI doesn’t help matters, as all it seems capable of is blindly rushing you, and will doggedly mete out and receive a beating until one of the two of you succumbs to injuries and dies. Occasionally their corpses will leave behind a delectable wedge of cake to fatten up your HP bar, but the absence of a dedicated healing item in the face of swarms of enemies who barely miss a beat after a full blown AOE attack is hugely frustrating. Combat becomes exasperating, aptly demonstrated by the fact that my emo hero’s blasé attitude towards upcoming frays unintentionally broke the fourth wall with how on the nose her grumblings were.

Boss fights could’ve been fun, with their charming set pieces and kooky characters, but they’re laughably underpowered, meaning that the difficulty of each of these encounters lies in fending off the mobs long enough to direct a hit or two in the boss’s direction. All of these battles involve picking up items around the arena, and throwing them at the boss or another target to make them vulnerable for an attack, but given that you’ll be lucky if you have time to blink as you swat at the hordes of cannon fodder engulfing you, achieving this seemingly simple feat will drive you to the brink of your sanity if you’re playing alone. It’s likely you’ll be found days later with the curtains drawn, smeared with icing and covered in cake crumbs, desperately trying to replenish your HP as you weep into your Victoria Sponge.

At first glance, Fat Princess Adventures is a candy-coated, hack-and-slash romp through a deliciously whimsical landscape, but the hollow combat and shallow gameplay leave a bitter aftertaste for what would could’ve been an enchanting addition to the series.

Fat Princess Adventures is colourful and endearing at first, but the proof is in the gameplay pudding. Unsatisfying, flimsy combat and class-specific loot drops make extended play a real grind. Pity.