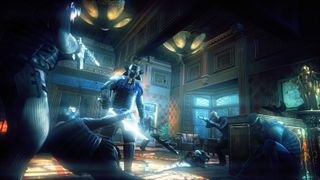 Museums are often considered boring and stuffy places, where the most exciting thing that could happen is someone accidentally coughs a little too loudly. The following examples will prove, however, that this is not the case when we visit these buildings on Sony's consoles, as we go curating and killing in PlayStation’s best historical (and homicidal) institutions.

He may have been inspired by the adventures of Indy, but Nate and Dr Jones have different views when it comes to rare artefacts. “They belong in a museum,” is not a philosophy Drake’s too keen on. He eagerly busts into the Istanbul Palace Museum to steal a Mongolian oil lamp in Uncharted 2.

They may not be ‘fraid of no ghost, but curators everywhere are terrified of the ‘Busters. And with good reason. While trying to stop another Great Destructor, Venkman and co. utterly wreck the Big Apple’s Museum Of Natural History with their Proton Packs.

What does every malevolent, southern redneck millionaire own? Why, their very own penthouse/private museum, of course. While there, on the trail of Blake Dexter, Agent 47 ends up murdering the evil-doer’s secretary. Why not use an exhibit for the hit, like a pointy whale harpoon? Ouch.

Forget a night at the museum, try spending 20 minutes in one during a diamond deal gone wrong. One of GTA IV’s best missions sees Niko flogging stolen stones before a shootout erupts among some dino exhibits. Museum Piece also involves Johnny and Luis – the two leads from the Episodes From Liberty City expansions. How very Pulp Fiction.

Never let it be said that educational exhibits can’t be cool. Take Tequila’s trip to the Chicago History Museum, which soon transforms into a firefight among (you guessed it) dinosaur remains. But the cop isn’t there to bone up on his palaeontology – he’s trying to save his family from the Russian mob. Cue sliding along a T rex’s spine.

The Insomniac Museum is in several Ratchet & Clanks, providing a window into vehicles, characters and features the developer cut from its final titles. In R&C3, you could access the emporium by either 100%ing the game or visiting the museum between 3am-4am.

Gotham museums do things differently. Instead of Bats facing a narrated tour, he has to contend with dino models coming to life, Penguin’s pet great white shark, plus armies of Joker’s thugs. The reason he has to endure these obstacles? So he can rescue lunatic lolly-lover Mr Freeze. Makes sense.

Ah, the Columbian Archeological Society. Not only is this virtual museum a hub for Infinite’s Clash In The Clouds DLC, it also stores some cool character models. Coo at Booker’s chiselled jaw, cower beneath the Songbird, or buy models of the Lutece Twins to unlock a house with Voxophones. Yup, museums rule.

A rare moment of fourth wall-bending wackiness from MW2. Wrap up the campaign and you’ll be treated to an interactive museum based on levels from the game, set in Encino, California. Push the buttons on these displays, and their models will come to life. Best shoot ‘em quick sharp!