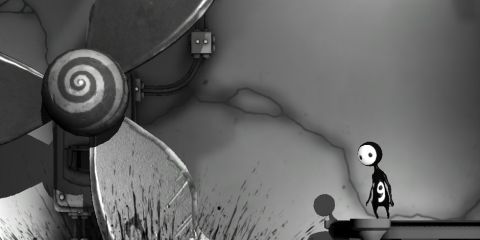 Escape Plan’s plot is about as light as they come – bondage-clad protagonists, Lil and Laarg, need to escape a series of black-and-white booby-trapped rooms while a mysterious villain attempts to thwart them. Granted, not much context was needed to draw us into this charming black-and-white downloadable launch title, which makes use of just about every one of the system’s controls to allow us command not just over the duo, but the environment as well. We can knock blocks out of the way, spin fans, and push platforms in any direction we please on our way to saving the pair of mute misfits.

But as time went on we found that it wasn’t the creepy in-game adversary we had to worry about. No, his frightening mask and devious laugh had nothing on Escape Plan’s real antagonist: the "feeling out" process of a launch game on a new platform.

Above: The duo's different abilities work together nicely

We’re not exaggerating when we say that Escape Plan makes use of everything the Vita has to offer in terms of controls. Just about every puzzle-filled room uses both the front and back touchpad, with many others utilizing the system's motion controls. Tapping, swiping, and turning the system enables actions as simple as swiping across the screen to move Lil or Laarg, or as complex as pinching the screen to cause a helium-filled Lil to fart.

Sometimes we’d need to use several different inputs at the same time, telling sheep to move with the back touchpad while covering cracks in deadly gas pipes on the front, or tapping the back pad to move platforms forward and the front pad to move them back. Timing is key. Precision is important. When it works well, which it does about half the time, it’s an absolute treat, and an experience unlike anything we’ve played before.

Above: Check out an interview with producer Matt Morton

We didn’t even care when we died at first. We’d tap the wrong part of the screen and our character would walk into a spike, exploding in an adorable pop and spraying black blood all over the environment. A few moments later a new Laarg or Lil would appear with a white number on his chest, noting how many different characters we’d been through during our playthrough of the game. It was charming. We were charmed… for a while.

And then we started running into issues, and ones we couldn’t really blame ourselves for. Escape Plan rewards the player with stars for using as few inputs as possible. This makes sense, in theory, but whoever decided this obviously never actually played the game. Any touching of the back touchpad counts as an input. Moved your hand into a comfortable position while playing the game? Bzzt. Point off. Mistakenly tapped the wrong part of the back touchpad because your hands might naturally rest there?Bzzt bzzt bzzt. We’d sometimes tap next to a character we want to move only to have him spin around, as if he heard a noise in the distance. That "noise" would be "us tapping an inch to the left of its head, telling him to move."

Above: Use your other hand to pinch your nose

Losing points, as troubling as it is, is just a symptom of the game’s larger ailments – a small part of an even more troubling flaw that permeates every part of the game: the controls (or the game, we’re not sure) aren’t exact enough. Using the back touchpad is fine when making motions or gestures, but actually tapping a specific part of the back of the system while the camera is moving? That's a bit trickier. It’s a precise game that, too often, leans on imprecise controls.

And it’s a shame, because we only ran into these issues about half the time. Even in the latter half of the game it felt like every other level would be wonderfully crafted and well designed, while the other levels were frustrating, requiring more than we were capable of giving. Pinch the screen and tap the back while we turn it around? Move this character while we tell that one to stand over there? Guide the sheep with the back touchpad while the room fills with gas?

It became tiring, mostly because even after we’d figured out the “trick” to the room and solved the “puzzle” we’d run into issues with the controls. We’d devise the solution, but the roughshod gameplay became the biggest barrier between our escape plan and the execution.

The ability to skip any level helps alleviate these issue a bit, letting us avoid the roughest portions of the game while admiring the many bright spots. But by the time we finished Escape Plan, our fond memories of the earlier levels were mixed with vivid moments of frustration, and it was hard to separate the two. Did we love the level where we had to fart our way through a conveyer belt, or did we hate it? Did we skip over the level with the multiple gas pipes, or was it our favorite in the game? Escape Plan is a fantastic concept, and one that often makes use of the system's greatest features to amazing success, but the final product left a great deal to be desired, and left us more than a little conflicted.