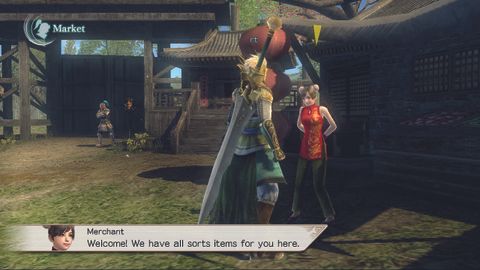 We have a dream: that one day Dynasty Warriors code will pop through the office letterbox and we don’t end up playing ‘pass the parcel’. We try not to pre-judge, but it’s hard not to when a series has consistently and impressively underwhelmed as much as this. However, when Strikeforce arrived, there was a sting in the tail: four player co-op. Now everybody has to play...

We regularly castigate Dynasty Warriors for always being the same, so four-player co-op is a start. We know too that somewhere, somehow, Koei has amassed a small but faithful hardcore following; and it’s quite a giggle to imagine every fresh tweak to Xiahou Dun’s moustache or Zhang Fei’s portly belly being ruminated upon with all seriousness.

We also know that, behind the appalling visuals (this dog really does look every inch the PSP port it basically is), dire camera and senseless button mashing lies an infinitely customisable combat experience that must be a completist/masochist’s dream. In a sense, Strikeforce almost dares to innovate with its new Monster Hunter-style hub where wannabe generals meet up before venturing off into the Chinese badlands to off bandits, capture fortresses, rescue maidens and ride tigers.

Always willing to play fast and loose with its Romance of the Three Kingdoms template, you’re now able to spice things up in the critically-lacking combat department with supernatural Fury transformations. Our favourite? Watching long-time office punching bag Zhang Fei morph into what could only be described as a low-rent Blanka, complete with green skin and ginger arm hair. Not so hot is Omega Force’s decision to integrate preposterously fiddly air combat into the already confusing melee royales, especially when jerky animations recall stop-motion rather than something like The Matrix.

If you’ve got serious time on your hands or are velvety-tongued enough to convince three other douches to get involved online, Dynasty Warriors: Strikeforce might at times be classed as so-bad-it’s-good. And we guess that’s a start, if nothing else.