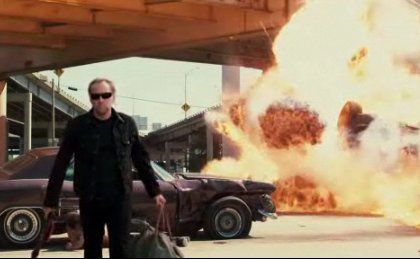 For every Adaptation or Bad Lieutenant Nicolas Cage makes, there is a Wicker Man or Bangkok Dangerous to restore karmic balance to the universe.

And if Cage’s latest is anything to go by, it looks like the pendulum is swinging back from arthouse curio to unabashed trash thanks to a film with undoubtedly this (or any other) year’s silliest title.

Cage plays John Milton, a generic badass who, brilliantly, escapes from hell to hunt down a cackling cult leader who wants to sacrifice babies to Beelzebub.

It’s as if Cage wrote down the mad cheese-dream he had after a drunken night reading his Ghost Rider comics and pitched it to Patrick Lussier (Dracula 2000). He says things like, “I won’t stop until I’ve drunk beer from his skull,” and you believe him.

He blows holes in bad guys while shagging a cocktail waitress in a shameless Shoot ’Em Up rip-off. He crushes more bad guys beneath the wheels of a classic ’60s muscle car engulfed in flames. Everything he does or says is punctuated by a hair metal guitar lick.

So toweringly ludicrous is the premise that Drive Angry was always going to run out of places to go, largely thanks to a script that coyly hints at irony before giving up and just reverting to plain dumb.

But then, this is the kind of Grand Guignol pantomime in which burning heads, slo-mo bullets and streaks of gore are chucked into your lap with giddy abandon, via some surprisingly well-done, if headache-inducing, 3D.

In many ways it’s the apogee of Cage’s career, a potent concentration of the dangerous, snakeskin-jacketed southern-gothic lunacy he has made his own since Wild At Heart.

At this rate, it’s going to take a three-year stint narrating obscure Eastern European agricultural documentaries to make up for it...