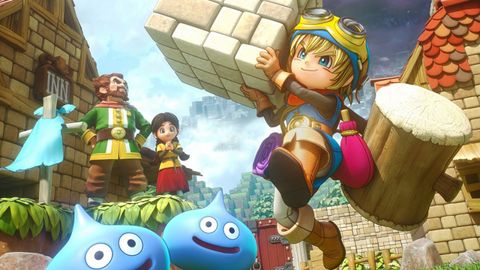 Combat could be better, but Dragon Quest Builders combines RPG structure and freeform creativity to great effect. It's Minecraft for people who hate Minecraft.

If you’re not familiar with Dragon Quest Builders, it’s basically a spin-off from the main Dragon Quest RPG series, meaning you need to know little to nothing about them to play Builders. Instead, this is a game that’s part Minecraft and part Zelda, which might sound like a strange combo, but it actually works. You split your time between building a little base for a steadily growing community, going on quests for them across the lands and fighting off monsters, both to gather their insides (*yum*) and protect your followers. You are, after all, kind of a god, as you’re the only one in any realm who can remember how to build anything.

The concept may seem simple, especially with the cartoonish looks and colourful graphics, and it is at first. Straw mattresses start out as a total revelation, but the more you collect and build, the more complex items you’ll be able to craft and delight your villagers with. It constantly manages to satisfy your desire to build bigger and better things, but also that deep down lust to smash some things. Get bored of building (or smashing) and you can wander out into the world, explore tombs, solve puzzles and fight monsters twice your size or bigger. Who knew that fighting a giant scorpion would be so satisfying? Oh, that’s right, Monster Hunter World.

It’s a brilliant mix of gameplay that works wonders on the Switch. The missions are short enough to play on the bus or train, and the colourful worlds really pop on the Switch screen. It looks just as good as it does on the PS4 too, with those cartoon visuals helping to create a sense of parity across platform so you don’t feel like you’re getting the raw deal by opting for Switch over anything else.

Like the original PS4, Xbox One and PC versions released in 2016, there are some issues though. Camera controls can often flummox you, especially if you’re heading inside, hunting for treasure or rescuing some poor soul that’s trapped. The irritating camera angles can unfortunately mean sometimes you get trapped too, trying to smash your way out blindly. The combat hasn’t changed either. It remains fairly simplistic, with attacks occasionally managing to miss the massive targets because you’re not quite aligned properly. Keeping with the Minecraft theme, everything is worked out in blocks, so you basically have to be on the same block line as the monster to attack. None of those crazy 45-degree angles at play here.

Dragon Quest Builders is still the Minecraft/Zelda hybrid you didn’t know you needed, perfectly scratching your Breath of the Wild itch while simultaneously encouraging your building creativity. And while there are still some lingering small problems, it’s an absolutely perfect fit for the Switch. Sam Loveridge

The world lies in ruins; you are the only one who can restore it to its former glory. It's a cliche among cliches, and it's one that Dragon Quest has reveled in since the series’ beginning. Dragon Quest Builders wants to do something a bit different, though. Rather than moving from city to city consuming items and destroying monsters, Builders actually wants you to create, to use your own two hands to craft your tools, rebuild towns, and cleanse the world of evil through the magic of building.

Dragon Quest Builders positions itself as sort of an alternate sequel to the very first game in the series, set after its hero decides to strike a bargain with the Dragonlord to join him and rule the world with an iron fist. With the world destroyed, you awaken (after picking your gender, skin color, and name) in an underground cave, the only one in a desolate land who knows how to create. Over four chapters, you'll travel to distant locales to rebuild villages, fight an absurd number of slimes and other Dragon Quest staple enemies, take on quests for new residents, and find the requisite items for the magic weapons you'll need to take down each region's boss. Its cartoonish look and story may appear simple, but it's as charming and bubbly as any other game in the series, with well-written characters and the signature stylings of series artist Akira Toriyama. It's pure Dragon Quest fanservice, complete with a soaring orchestral soundtrack by original series composer Koichi Sugiyama, though you don't need to know a lick about the series to enjoy what it has to offer.

To describe its gameplay in the most simple terms, Dragon Quest Builders is a cross between survival and crafting games like Minecraft and action RPGs like The Legend of Zelda, combining the resource gathering of the former with the quest-based progression and combat of the latter. When you start, you'll only have access to a handful of basic, wooden items, which break easily and can only deconstruct the simplest elements. As you help villagers with their requests - whether that's fetching them a handful of a specific items, slaying monsters, or building and designing rooms to their specifications - you'll gain access to new recipes, which in turn give you access to more items, tools, and materials.

It may seem that its two halves - the boundless creativity offered by its crafting systems and its more rigid narrative and quest-based structure - would be at odds, but they actually complement each other incredibly well. Other than the occasional blueprint (which forces you to build a room to exacting specifications), you're largely free to build each town however you like. The only requirements to designing a room are that it has a wall two squares high, a light source, and a door, and once a room is finished, you’ll be graded for your efforts. Different combinations of structures will create specific kinds of rooms, which add bonuses to your town, like allowing your villagers to cook food for you while you're away, or grant them more health or stronger weapons in combat.

It's a fantastic convergence of structure and creativity, where the quests provide both impetus to explore and inspiration for building. There's always something you're required to do at a given time, and actually completing the tasks required of you provides tangible rewards you can use to improve the quality of your town. Those who want to explore Builders’ creative depths are encouraged to do so, as you're given a wide variety of construction materials and decorations to really make each location your own. Or you can opt to make a purely utilitarian town with the bare minimum of essentials and focus solely on questing; Dragon Quest Builders is cool with that too. Occasionally, your town will come under attack by roving monsters, but for the most part, you're allowed to approach Dragon Quest Builders on your own terms, as it caters to multiple styles of play without judgement. Its boundaries are more noticeably inflexible than games like Minecraft, but there's still a lot of opportunity to make each location your own within its limitations.

Actually building stuff, for the most part, is relatively painless, and even if you screw up, a couple of whacks will transform whatever you've placed back into a tiny version of that item which you can pick up and place again. But the most impressive thing is seeing your villages grow and blossom over time. When you first arrive in an area, you'll maybe have a room to craft items and a basic bedroom with straw mattresses. By the time you're finished, you'll have a bustling town with a half-dozen other people milling about, each contributing in small but helpful ways. It feels really good to look back and see the progress you've made and the stuff you've built.

In opting for this more guided, hand-crafted structure, Dragon Quest Builders is able to provide unique challenges you won't find in other procedurally-generated games. By the end of chapter one, you've likely got a handle on how to build defensive structures and how to upgrade from wood to steel, to silver, and on. Once you step through the portal to the next chapter, though, your health, items, and equipment are reduced to the bare minimum once again, and the mineral-rich areas of chapter one give way to a desolate, poisoned wasteland, where even basic elements like wood are incredibly scarce. It's a bit of a bummer to lose everything at first, until you realize that this new world now holds a wholly different set of challenges that force you out of your comfort zone because you simply don't have the same materials available. Each chapter comes with its own set of unique environments and obstacles to overcome, and while the main quest is relatively straightforward, there are numerous side areas that require you to find keys or solve puzzles to access the rewards hidden within.

If you're looking for some more free-form creativity, the Terra Incognita mode is far closer to a typical Minecraft game, which dumps you into a map where you can create to your heart's content without fear of monster attacks. You can access portals that take you to the worlds of the chapters you've cleared, so you can fight enemies and gain access to unique ingredients to customize your own personal world, and then share your creations with other players online. You won't find a creation suite as deep as Minecraft’s, but you have enough tools at your disposal to create some impressive-looking structures, as long as you have the time and resources available to do so.

While the building and exploration are well-implemented and fleshed-out, the same can't be said for Builders’ combat, which is incredibly basic and ultimately kind of wonky. Most battles are little more than watching for enemy wind-up animations and trying to move out of the way while mashing the attack button and hoping your weapons don't break mid-fight. There are the occasional town defense quests, which require you to fend off a few waves of attackers while utilizing the defenses you've built, but the moments where everything comes together (and the enemy AI cooperates with your traps) are relatively rare compared to how the rest of most encounters shake out. Ultimately, the action just isn't all that deep and satisfying, especially when held up against its more rewarding crafting and town-building systems.

Builders' camera and controls will also fight against you occasionally, and usually at the most inopportune moments. Most of the time, they're serviceable, but when you're in the thick of combat or in confined spaces, you'll likely long for more responsive and accurate controls and a camera that will actually show you what you need to see. God help you if you find yourself deep underground, as the camera pulls in so tight it's practically impossible to see what's going on. A simple first person mode (or even some more basic camera zoom controls) could have done a lot to mitigate these frustrations.

But even with these issues, Dragon Quest Builders is easy to recommend. It may not be as deep as its genre contemporaries, but its mash-up of crafting, survival elements, and RPG questing set in the colorful, cartoony world of Dragon Quest is rewarding and breezy fun for players of all levels of creative ability. David Roberts

Combat could be better, but Dragon Quest Builders combines RPG structure and freeform creativity to great effect. It's Minecraft for people who hate Minecraft.