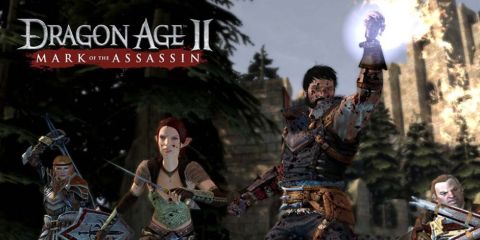 It's probably inevitable that successful franchises will gravitate toward the same paradigm - and this is probably even truer when it comes to successful series from the same studio. And so it is with BioWare's newest Dragon Age title, a game that moves away from its predecessor in just about every area, and moves toward another BioWare blockbuster RPG: Mass Effect.

The Mass Effect-inspired modifications in Dragon Age II range from cosmetic (the dialogue system) to foundational (the combat system), and from well-taken (the dialogue system) to nigh-on disastrous (the combat system) - heck, you can't even buy your companions new armor, just as you couldn't in Mass Effect 2. In short, you can think of Dragon Age II as being more console friendly, more action-RPG, and less wide open than Origins, but the heart of the game, thankfully, remains unchanged.

Set in the same world as Origins, and just after the events of that game took place, DA2 will be immediately familiar to fans, and is so filled with background text, expository dialogue, and flashbacks that complete newcomers will pick it up in no time. Indeed, the game seems to have been keyed a little too much toward absorbing new blood: combat has gone from an intricately planned, isometric affair to a 3rd-person, beat-‘em-up style of fighting.

You can still program AI characters with subroutines that will cause them to activate the powers you want more or less when you want them to, but it's far more cumbersome to issue orders en masse or to set up a coordinated series of attacks as you would've done in Origins. Instead, you'll spend most of your time in control of a single character (you can easily switch among them with the tap of a button), whacking enemies and unleashing powers. Most of the time, this means mashing the attack button, with the occasional use of a special ability/magic spell every so often. It's straightforward, sure, and easy to pick up, but it lacks subtlety, panache, and most of all, the feeling of real tactical engagement that Origins had.

On the other hand, your time spent between combat is enhanced considerably from the previous Dragon Age title - now, characters are more fully fleshed out without being as expository about their thoughts and feelings as they had been. The storyline, too, constructed as a frame-story series of flashbacks, goes from "go-here-find-this-blah-blah" to one of the more compelling fantasy tales in videogames. In short, the writing is better - and that's a very good thing.

And the game looks nice, too, with more colorful environments, more detail in character and enemy models, and a grander, more cinematic vibe. This is helpful, because the scope of the action - in terms of level design - is actually narrower and more linear than it was in Origins. To be sure, you'll complete plenty of side quests (some of them purely by accident), and the story will branch depending on your dialogue choices (and on what you did in Origins), but because of the way the narrative is laid out - primarily in flashbacks with an unreliable narrator - and because you spend a lot of time retreading the same levels and dungeons, you feel much more "on rails" than in other, truly wide-open RPGs.

Another reason the game feels less free is, ironically, because it's so easy. While you can futz with the difficulty level to give yourself a tougher challenge, your characters (especially protagonist Garrett Hawke) can take and deal out far more punishment than they could in Origins - especially at the outset of the story. We never felt particularly challenged in combat, except with the occasional boss fight - and we never felt we needed to be very concerned with what our AI-controlled companions were doing, either. While this is nice if you're interested in a sort of interactive movie experience, we would've liked to have had to think about our decisions (at least insofar as combat and action are concerned) a bit more carefully.

In the end, DA2 is sure to be a divisive game. The purist, PC-RPG crowd will hate it for "dumbing down" one of the last remaining hardcore RPGs, while the console clan will love it for making a fantastic series more accessible. Everyone should cotton to the clever, twisty story and fully fledged characters. It's hard to say that DA2 is an overall improvement on Origins, but you can't deny that it's a bold step toward remaking the entire action-RPG genre - something we'll have to evaluate the success of with Dragon Age III.