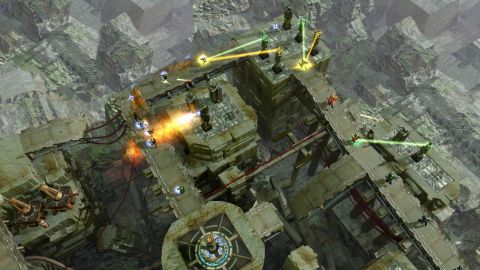 A little extra presentation magic can go a long way to help a game rise above a sea of play-alikes. Take Defense Grid: The Awakening: Granted, it’s yet another variation on the tower defense genre - a crowded subset of real-time strategy puzzlers in which you set up specialized weapons towers to prevent increasingly powerful waves of aliens from grabbing your power cores and retreating off the map - but this particular example is so polished that it’s worth paying for.

For starters, DG nails the core experience. The maps smoothly increase in complexity: aliens begin to attack on multiple tracks; puzzles offer a nice variety of challenges, like shaping the invaders’ path by creating walls of towers; and an orbital super weapon adds an intriguing twist to the gameplay. I lost myself for hours on each puzzle trying not just to complete the level, but to do it without losing a single core and to beat the scores of my Steam friends. Even during the toughest tests, my frustration at the aliens’ stubborn refusal to die could be fixed by taking a step back and completely reevaluating my strategy, then trying a totally new approach using different towers, upgrades, and placement.

Most of that can be found in nearly any TD game, though. What makes Defense Grid stand out are the extra touches - the 20 maps feature beautiful and varied backdrops of fiery, icy, or urban settings, and the types of towers and aliens are all as distinct and recognizable as their special abilities, which come complete with flashy visual effects. But maybe the best part is your guide: an AI with the downloaded personality of a shell-shocked former commander. The voice acting is a captivating performance that sadly never develops into a GlaDOS-caliber character, but it does make you want to advance to the next level just to see what the addled old fellow will say next.

Defense Grid is such a charming and challenging experience that shouldn’t be missed by tower defense fans. Even if you’re not a fan, it may turn you into one.