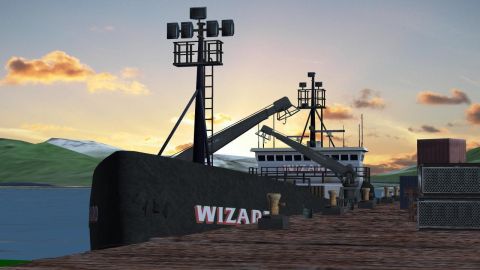 Crabs and videogames have never really gotten along. In the digital realm, they tend to be much larger than they have any right to be, and usually require immediate termination with the use of a gun or some kind of magical attack. Deadliest Catch: Sea of Chaos takes a sympathetic look at the crab by tasking the player with merely capturing them. No need to cast spells or reload your rocket launcher, just throw down your traps and take a nap, because this game is boring. Maybe there is a reason crabs are always over-sized in videogames. It’s because any digital interaction with normal sized crabs will turn into a struggle to maintain consciousness.

Deadliest Catch: Sea of Chaos is based on the Discovery Channel’s hit ocean-based murder simulator show of the same name (crab fishing can literally be fatal). The show is interesting, dangerous and most importantly, exciting. Deadliest Catch the game is none of these things. It has more in common with Mario Party and its minigames than anything else, but that doesn’t mean the game is entirely without at least some merit.

Sea of Chaos puts the player in charge of a crabbing boat and all the trials and tribulations that come with that responsibility. You begin the game by buying a boat, hiring a few deck hands, and heading into the big blue watery road to catch some crabs. The aquatic kind, not the red light district kind, although a game based on the latter might have been more compelling.

In order to capture crab, there are minigames that must be employed and statistics that must be monitored. Your crew will tire, your gas will run out and your equipment will wear down as you crab the uninviting waters. Along with keeping all of those things in check, you must also set traps, gather traps and sort crabs under the guise of minigames. After you’ve done all that, you head to port to unload your crabs, refuel, etc. and then you head back out in order to do the same thing all over again until you decide you’ve had enough.

There are six minigames, all of which you will have the opportunity to master whether you want to or not. Laying traps involves steering an intentionally unresponsive boat towards rings in the water and timing the dropping of your traps. Gathering the traps involves throwing out well-timed rope tosses into the ocean as you pass by your traps. Sorting the crab is about as interesting as it sounds. Good crabs go to the right, and everything else goes to the left. Selling the crabs involves throwing the six legged creatures into a basket while avoiding a swinging crane, which doesn’t seem accurate to the actual process, but we write about videogames so what would we know about crabbing? The other two minigames show up randomly. One has you organizing different lengths of wire over a grid to repair broken hardware, while another has you searching the waters for crabbers who have fallen overboard. Saving the crabbers is basically a retooled version of the setting the traps minigame.

The strategy of Sea of Chaos comes from performing these minigames at the right time, in the right place on the ocean map, with the right crew members. Crew members level up their skills as they are used, and boats can be upgraded as money is earned. It all culminates into a simplified strategy game with minigames.

Despite the dull and repetitious nature of the game, in can be incredibly rewarding at times. Pulling up a trap brimming with crab is genuinely exciting. It means more sorting, and more selling, but it also means more money. The game offers a scorecard, just like the show, of how much money all the different captains are making with their crab. To pull ahead of somebody is exciting, and usually required for finishing a season successfully.

And speaking of those captains you are trying to defeat, they are all people you recognize from the Discovery Channel show. You can call them and offer crab hunting tips, or receive tips, as well as build allegiances and enemies. Memorable events from the show will occur too, with different in-game crabbing seasons corresponding to different seasons of the show. As a representative of the personalities of the TV show, the game succeeds here somewhat, but as a simulation of the exciting and dangerous world of crab fishing? No. It doesn’t even come close.

For huge fans of Deadliest Catch who don’t fall into the realm of hardcore gamer, this game will be perfect. It’s not too hard, it has elements of the show, and you can play the minigames competitively with the people sitting next to you. There is no online for this competitive mode, but it is not missed. As much as we would have loved to earn a trophy for beating 25 online competitors in the crab sorting game, it’s not a feature that the game is missing, so much as it’s just one that it does not happen to have.

It’s dull, with rare moments of huge reward, and the only game it’s competing with in the graphics department came out about 10 years ago, but it is not poorly designed. It works fine with no glitches, and it trains the player well on becoming the ultimate crab captain. It’s just too boring to be fun, and too repetitive to be compelling. All six seasons of the show are stream-able on Netflix. Just go watch that instead.