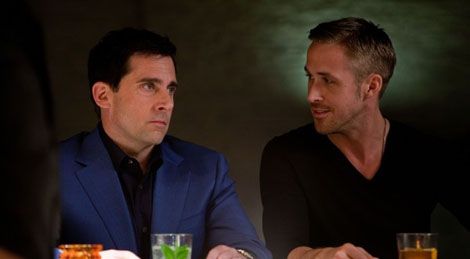 Ryan Gosling with a spray tan and a gym membership could sell any movie.

But if girls queue up to witness the fitness, Crazy Stupid Love is really a male-odrama with equal appeal for the fellas.

Your first clue that this movie is more interesting than its title? Not many Hollywood romcoms have more directors than screenwriters.

Deftly knitted together by scribe Dan Fogelman (Tangled) and directors Glenn Ficarra and John Requa (I Love You Phillip Morris), the plot splinters out of the shattered life of happily married Cal (Steve Carell), who discovers his wife (Julianne Moore) has cheated and wants a divorce.

Cal’s not the only one in a pickle: his son (Jonah Bobo) yearns for the babysitter, the babysitter yearns for Cal and his wife is dating co-worker Kevin Bacon. Enter slick pick-up artist Jacob (Ryan Gosling) to transform Cal from loser into playa.

As Jacob gives Cal a man-over and unleashes him on barfly Marisa Tomei, the script brings the smarts but the cast bring the heart.

Carell’s the sincere everyman wearing his broken heart on his sleeve, while Gosling is effortlessly smooth and, crucially, likeable enough to dodge the character’s in-built sleaze.

You’ll wish it dug a little deeper into its characters – not least Emma Stone, massively cool in an underwritten role – but it’s a romcom that puts smart moves on genre conventions.

It’s a funny movie that tiptoes into serious adult pain, and it’s full of witty touches from Cal’s agonising Velcro wallet to Stone demanding an R-rated sex scene with Gosling. Fair enough – this boy is top-shelf.