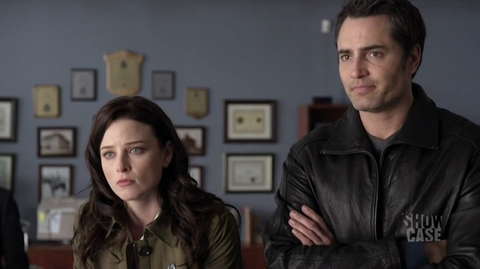 THE ONE WHERE Liber8 kidnaps the head of an oil company and hold her for ransom – although their plan is really to generate support for their campaign. It works.

VERDICT A solid little episode, this, and one with a biting theme about the way the general public can bay for blood which wouldn't seem out of place in an episode of Charlie Brooker's Black Mirror . An oil executive is kidnapped and the public is asked to vote on whether she should live or die – overwhelmingly, they vote for the latter. There's a throwaway line saying they think it's a game but it doesn't seem that way: they're actually voting to kill her. Ouch. And it's all part of a clever plan by Liber8 to spread the word about their anti-corporation manifesto... you have to hand it to them, they're clever sods.

Kiera and Carlos get down to some solid police work with very few distractions for once (although Kellog is the one who eventually gives Kiera the biggest clue, which was a nice way of including him in an episode that had no use for him). In fact, this is probably the most “ordinary” episode of Continuum yet, with barely any sci-fi elements other than the flashes to the future at the start and end. These are enlightening, incidentally, showing a Kiera who's worried about the way the corporations are working, with her husband gently taunting her about being a member of Liber8. Oh, the irony.

Alec gets a sub-plot in which he realises his step-brother has joined the riot outside the Exotrol building. He hides this news from Kiera until the end, but promptly grasses his bro’ up to his dad, who isn't pleased. It's hard to know what to make of Roland, actually, because so far all we've seen of him is a guy holding anti-government meetings and being a bit preachy. Here we discover that he lost his farm to the banks and Julian blames him for it. Guess that explains his anger, then. It's another example of Continuum using modern events to fuel their story, from banks getting bailed out and nobody going to jail, to the Occupy movement sweeping the world. (When Kagame explains the global banking crisis to Sonya it really does sound too crazy to be true...)

The ending, in which the kidnap victim is wired to explode and has to tell the truth to survive, is suitably tense. Plus it's nice to see how close Carlos stays to Kiera despite the imminent kablooie. They really are a team.

DID YOU SPOT? In Inspector Dillon's office, there's a wee toy police car on the shelf behind Betty – clearly desk-bound police inspectors miss driving around all day.

WHOA, THAT'S DEEP The head of Exotrol's security is played by 6ft 5in Mark Gibbon, who appears to have the deepest voice known to man (or woman). His IMDb bio says that he's voiced The Hulk in Iron Man: Armoured Adventures ; personally we're thinking he'd make a good film trailer voiceover guy...

O, CANADA It's raining again. Does Alec's farm EVER dry out? We'll keep you posted.

COOL TECH Kiera uses her chip to work out where on a wire fence is weakest so she can shoot it and bring her suspect crashing down. She also zaps Francis Hall with truth serum to get him to reveal his employer... and now we're wondering why she doesn't do this to everybody, every week, so she's never lied to again!

MORAL AMBIGUITY... It seems a bit strange that a group of Occupy protestors outside the oil company, all of whom are holding signs with variations of “Stop the greed” written on them, would drop everything and start chanting “Give us the money!” when Liber8 asks for the $20 million to be paid to them. It's probably meant to be ironic – and show how even the best-intentioned people can buckle when faced with a huge payout – but the way they turn into a baying mob seems a little unrealistic. Then again, maybe I'm being an optimist and people really are so shallow. Who knows what would happen in a real-life situation like that? I'd probably kick over a granny or two to get my hands on a few million myself.

ANIMAL MAGIC Kiera sees a horse and goes all starry-eyed because she's never seen one before. The future is a world without horses? If they've died out, there's definitely no hope for pandas.

SO MUCH FOR FAMILY Julian tells Alec to get stuffed at the end of the episode, fed up that he turned him in to his dad for attending the riot. While it seems to be a big thing for Alec, we can't quite understand why we're supposed to care – Julian's been an utter git since the first time we saw him, acting like a sulky teenager. Is it really a huge loss?

IS IT JUST US, OR...? Was anyone else studying the crowd for a Father Ted -style sign saying, “Down with this sort of thing” or “Careful now”? Sadly there wasn't one.

BEST LINE
Francis: “Please tell me you're about to play bad cop. I would really, really like that.”
Kiera: “Be careful what you wish for.” [Zaps him full of truth serum]