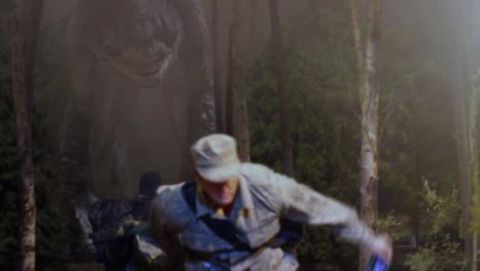 THE ONE WHERE Lt Scott, Eli and Chloe hop from one planet to another using the stargates in an attempt to make it back to the Destiny before it jumps into FTL drive; Greer is left for dead but manages to find his way out of the cave-in. Meanwhile on Destiny, Tamara works up the courage to tell Col. Young that she is preggers.

VERDICT A very entertaining follow-on from last week’s cliff hanger with lots of use of the stargates and the fleshing out of Greer’s character. With Destiny ready to jump to the next galaxy and the away team still lost, the tension and emotion was high. And in a surprise ending, Lt Scott, Eli and Chloe don’t make it back to Destiny before it jumps into FTL drive, leaving them stranded as an awkward threesome. But with three major characters off Destiny, their rescue is pretty inevitable, right? Hopefully the writers won’t keep them separated from the main group for too long.

The flashbacks into Greer’s childhood was interesting and intense to watch and it was nice to see his vulnerable side. His character has always been a bit of a mystery, and finally able to see into his past we learn that his abusive father (who is a army veteran suffering from post-traumatic stress) is the reason for Greer’s temper and resentment towards the military. The previous episode showed a quick flashback of Greer as a child huddled in a dark and confined space and that flashback continues and is explained in this episode to be him hiding in a bedroom closet terrified as he listens to his father verbally (and maybe physically) abusing his mother. Before this episode not knowing his back story, Greer was simply portrayed as being a “bad seed” but now seeing strength and compassion in his character – as a child he continuously attempted to rescue his mother from Greer Sr – he’s now seen as being quite heroic. Now that’s a great twist in character development!

The only thing that ruined the quality of this episode was the look of the alien/monster/ Cloverfield creature that Lt Scott, Eli, and Chloe encounter. Too over-the-top.

Because the stargates aren’t advanced enough or have enough power to dial another galaxy, it’ll be interesting to see how Lt Scott, Eli and Chloe will find their way back to Destiny. Maybe there’s a Zed-pm laying around somewhere... The suspense to see them reunited with their mates is palpable. Leaving off on another cliff-hanger, I’m excited for the next episode.

KNOCKED UP Col Young... you are the father. At 22 weeks into her pregnancy Tamara can’t hide her baby bump anymore and decides it finally time to tell Col Young that she’s pregnant, and that he’s the father. Surprisingly, he seemed to take the news in stride. That’s right, Col Young... C’est la vie .

MONSTER ATTACK Although usually the CGI on this show is done really well, the monster that looked like it had sauntered out of the movie Cloverfield in this episode was a bit cheesy. Perhaps the creature would have been more scary if they kept it hidden behind the mist and trees instead of the cartoonish toothy close-up.

ALIEN PROBE It appears that Chloe has been mind-probed by the aliens who kidnaped her, giving her special knowledge of alien language and technology. Finally she has a purpose on this show other than being eye-candy! Hooray! Good-looking, smart and interested in archeology, could her character be the new Dr Daniel Jackson? ( Hmm, not sure she’ll attract quite the same fanbase, Kell – ed. )

JUMP! I reckon that the monitor displaying the clock on board the crashed alien ship is linked to the jump countdown clock on Destiny. Even with the tracking device removed from Dr Rush’s chest, the aliens are probably too invested in Destiny to leave them alone. Even jumping to a new far-away galaxy, it’s more than likely that the alien threat will still exist.

BEST LINES Eli: “This is crazy. You'd think some of these tunnels would lead somewhere. No wonder the people who built this place died off. They probably all got lost down here. Just wandered around thinking, ‘Oh, if only we'd thought to put in a few more exits.’ Or how about one of those maps you see in a shopping mall, with a big red dot. ‘You are here.’ How hard is that? I'd kill for a big red dot right now.”
Greer: “I can't take this anymore.”