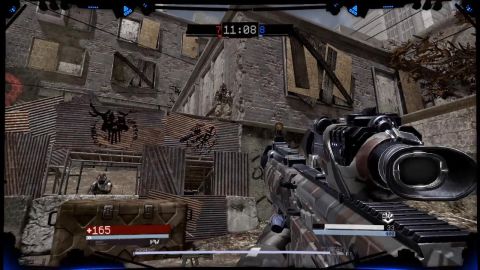 Stories are for losers, Blacklight: Tango Down seems to say. Deep down, it says, we want nothing more than to be kicked face first into a multiplayer fragfest and start pumping bullets into our fellow man with not a care as to who’s right or wrong. Perhaps it’s right. Even so, that’s a pretty tall order for a game that somehow boasts a series of comic books and a feature film in the works, which has to be a first for a downloadable game.

Above: Hey, kids! How many game references can you find in this picture?

Oh, sure, by digging around in various menus after tiring of the inexcusably long waits between matches, you’ll find some vague references to a former Soviet state not far in the future (close enough for Alienware ads on the wall, anyway), where a special forces group known as the Blacklight battles against some rebels called the Order. And, for good measure, there are some zombies straight out of 28 Days Later - or more properly, citizens affected by SIV (Sentient Insanity Virus).

But all of this is beside the point. Blacklight: Tango Down seeks to bring the beloved multiplayer modes of AAA shooters to a downloadable game that only costs fifteen bucks, and in many respects it does this well. Call of Duty players can hop straight from Modern Warfare 2 and start blasting away, since the controls are essentially the same. Seeking to please, Blacklight: Tango Down dumps seven entertaining modes on your plate for up to sixteen players - Deathmatch, Team Deathmatch, Retrieval, Domination, Detonate, Last Man Standing, Last Team Standing - along with twelve surprisingly open urban maps with names like Wharfare and Derailer. (In the latter, a commuter train inexplicably runs full speed through a war zone. If only Chicago had that kind of service).

Customizations result in a dazzling number of weapons approaching Borderlands’ recent boast of a “bazillion” guns, chiefly through unlocking weapons and parts as you level up. Unfortunately (or fortunately, depending on who holds the gun), compared to other multiplayer shooters, this feature can result in some regrettably overpowered weapons - including SMGs that can seemingly kill you from the next city over in a split second. At the same time, however, sniper rifles often seem made for scratching your opponent’s back, and hand grenades occasionally seem like glorified firecrackers. This is made worse with frustratingly sloppy aiming controls, which lack the precision of other shooters. Expect a rough time if it’s your first run through the game since it will often take a few bullets to down higher-ranked players, compared to the single shot it will take to kill you.

Above: Always wanted to put a scope on a shotgun? Yeah, you can do that, too

Still, from the very beginning you have access to a nifty toy called the HRV (or Hyper Reality Visor), which levels the playing field a bit and serves as one of the game’s main claims to originality. Designed to stop camping, the device allows you to see ammo caches, first aid stations, and - most importantly - enemy and friendly players for a few seconds. Switching it on, however, prevents you from shooting for the duration and all normal visuals are removed (think Detective Mode in Batman: Arkham Asylum).

We often found it more of a hassle than help while playing, though, as enemy players in the fast-paced combat often took the second of vulnerability it creates as a chance to mow us down. Time and time again, we saw our death coming toward us up a nearby ladder or something similar in the visor with fatal inevitability, knowing we’d never turn it off in time to fire our weapon. On the plus side, this delay (in addition to a recharge timer) prevents the HRV from being too overpowered. Also, that high-tech bucket on your head means that when players throw a “digi grenade” in your vicinity, it highly pixelates the blast area, making it impossible for both prey and predator to see around it. If you happen to be right in the explosion radius, your visor will shut off temporarily, rendering you blind and giving a whole new meaning to the Blue Screen of Death.

Above: The last thing you’ll see before the guy on the right scores a headshot

And, sadly, the visor doesn’t stop camping. In fact, it might actually assist it. While the visor is useful for sniping snipers and finding the general location of the enemy, the game’s annoyingly fixed spawn points and frequent player deaths ensure that a decent group of players can bring their hot dogs, campfires, and high-powered weapons to a Team Deathmatch and stand right outside the enemy base and mow you down as you try to leave or get a shot in. This happens rather often, and is made worse with new players unable to join a match in progress. We sometimes found on the scoreboard that all our comrades had abandoned us and we had been alone against at least seven players.

Lastly, the Black Ops co-op mode is the game’s most disappointing feature. Linear, uninspired, and lacking any kind of boss fights, the levels can be mastered just by flipping on the visor as soon as it recharges and fixing your sights on the targets and wiping them out as soon as they appear. After amassing an impressive bullet collection in our bodies in several multiplayer Deathmatch sessions, we took to calling it “Feel-Good Mode.”

Above: You could always try politely asking these guys if they’ll stop camping

A hopeful blockbuster that ultimately seems more like a good made-for-DVD movie, Blacklight: Tango Down offers little new, and most of the games it seeks to emulate do its job significantly better. Still, if you’re bored with what’s currently on the table, the visuals (while not jaw-dropping) are certainly pleasing if you’re into the whole dystopian future Russia fetish, the familiar controls are very easy to master, combat is fluid and fast-paced, and the customization options and wide range of player modes keep the game continually interesting. If you’re not convinced, consider this: for all you get, it’s really hard to argue with fifteen bucks.

My name is pronounced "Layf." I write about video games for a living. I grew up in Texas. I used to be a cowboy (spurs and all). Someday I'd like to live in France. I love nature. I love my wife. Any questions?
See comments