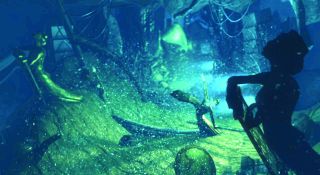 Rapture may be beautiful, but it’s also a dangerous place to be – so why not make it even more dangerous (for everyone else, that is) by following our BioShock 2 tips? These pointers should go a long way to ensuring that you make Rapture your own underwater palace in double-quick time. If you just want to get through to the end, you could probably do it in under five hours. If you’ve got somewhere to be, power-up one or two of the plasmids (we’d recommend Electro Bolt and Winter Blast), specialise in just one weapon (a fully-powered rivet gun will dish out fire damage on all enemies), and harvest every Little Sister you can get your hands on. However you plan on playing, have a read of our BioShock 2 tips and give yourself an advantage over the other Big Daddies.

Fight smart. Make sure you hack every vending machine you come across to lower the prices (be sure to invest in some gene tonics to make it easier), and stock up when you can. Learn all the weapons, because you never know what you’ll be left with at the end of a tough fight, and use the hypnotise plasmid regularly, so you can fight alongside security bots and even other Big Daddies.

2. Be a successful hacker

Hacking has changed completely, so get ready to stop the needle in the green area (or the blue for an extra boost). They gradually get harder as the game progresses, so be sure to invest in some gene tonics to slow the needle down. The best thing about hacking this time around is that you can do it in real time, while fighting enemies. You can also hack machines remotely by firing an auto-hack dart – useful for bypassing troublesome security systems.

If you trigger an alarm, it’s not necessarily a trip to the Vita-Chamber sin bin for you. There’s almost always a bot shutdown device nearby. The tricky part is reaching it in the first place…

3. Listen to the radio

Follow the sounds of the radios littered around Rapture – they’ve been placed there specifically to lead you to top secret hidden areas!

Weapons can be upgraded at selected Power to the People machines, but these are exceedingly rare, and worse still, they’re a one-shot only deal. For this reason, it’s best to specialise by ploughing all your money into one or two weapons; once maxed, they’re capable of delivering elemental damage – for example, the rivet gun spits out flame-tinged bullets, while the buck gives out an electrical shock. An additional benefit is that you can spend your money exclusively on weapons for just a select number of guns.

If you primarily use plasmids but are frustrated by how quickly they run out, you might want to consider the specialist gene tonic, which disables the guns entirely but makes both the EVE hypos and the drill fuel significantly more economical. If this is your bag, you can use the Power to the People machines to improve the drill so it can freeze targets and deflect bullets.

These are a new breed of Big Daddy, capable of long-range attacks courtesy of deployable mini-turrets, but inevitably, they’re no slouch in the close-range combat department, either. Despite all that, the best defence with a Big Daddy is a good offence. You can pick and choose when to start the fight, so make sure you’re stocked up on drill fuel, pick a plasmid capable of temporarily disabling him (such as Winter Blast), and bore away. Big Daddies with Little Sisters in tow can now be healed if you leave them alone long enough, so be sure to stay on top of things.

An utter pain to deal with, and to make matters worse, you can’t hypnotise anyone else to fight alongside you, as she’ll dispatch them in double quick time. The best thing you can do is keep them at arms’ distance by defending yourself with plasmids such as Cyclone Trap or Telekinesis, neither of which will deliver much damage, but will allow you to get some potshots in before retreating to another safe spot. When she closes in on you, make sure to position your back against a wall, but avoid being boxed in as she’ll finish you off in no time. She only arrives after you’ve dealt with a Little Sister, so be sure to stock up before doing so. Later in the game, you’ll encounter two Big Sisters in one go – now’s the time to use that Hypnosis plasmid!

If you have a Little Sister in your possession, you can get her to lead you to the nearest ADAM goldmine by following the on-screen scent. It’ll take her a little while to pump the ADAM out of its previous owner, however, and the smell will attract the entire world to her, so it’s your job to prevent the splicer hoard from distracting her from her work. She can’t actually die, but her progress bar will be severely disrupted if you let anyone get too close, and if you die, you’ll need to start again. Place trip wires and turrets around strategically before starting the process, stock up on first aid kits, and hack any nearby health stations beforehand to help your chances of success. Cyclone traps and Insect Swarm pouches are also your friends.

Plasmids are self-explanatory and you’ll probably already have an idea of what ones you wish to use, but what of the gene tonics, the other goodies you can purchase with ADAM? They use slots separate from those of the plasmids, and are not only considerably cheaper, but in the long run, every bit as beneficial. But which ones to buy?

That depends on your playing style, but we recommend tonics that will have a constant benefit, such as lowering vending machine prices, or fixing it so first aid kits restore EVE as well as health. We’ve already extolled the benefits of ploughing your money into making hacking easier, so do that and extra slots are a given. Lifting the limits on how many EVE hypos and first aid kits you can carry will pay dividends in the long run, too.

It’s tempting to stick with the obvious choices – Incinerate, Winter Blast, Electro Bolt – but good things come to those who experiment. The joys of the Hypnosis plasmid have already been explained earlier, and even seemingly useless ones, such as the Insect Swarm, can be used in creative ways if fully upgraded – in this case, any splicer killed by the swarm becomes an impromptu trap – anyone who blunders into their corpse will reawaken the insects. Plasmids can be combined to good effect – for example, a firestorm can be created by firing Incinerate into a Cyclone Trap – but both slots and ADAM are at a premium, so it’s best not to spread yourself too thin.

Look around the desks located deep within Fontaine Futuristics. On one, you’ll find an unstable transportation plasmid. It’s a tricky blighter to track down, but it’s totally worth it. While you're in Fontaine Futuristics, try making use of the demonstration machines during the fight in the plasmid testing zone. You can whip up some hair-raising results!

Towards the end of the game, you’ll earn a brand new plasmid, which we’re not going to spoil for you here. It’s the most powerful plasmid in the game, so use it as much as possible.

Ready for a new adventure? Good news – the next BioShock game is officially in the works from a brand new studio at 2K Games.