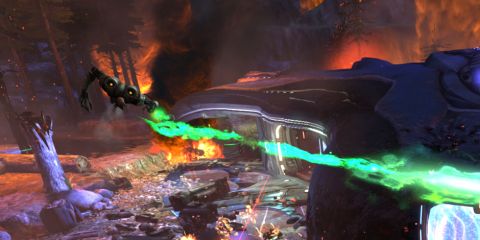 Firaxis’ reboot of XCOM, Enemy Unknown, is one of the most logically sound alien invasion games you’ll ever play. It accepts that if extraterrestrials were to invade the earth, it wouldn’t be a single soldier in a suit of armor that fights them off by blasting his way through their defenses. No, it would require a multinational organization dedicated to researching the aliens, building the tools to defeat them, and engaging them in strategic battles to fuel the resistance. It also admits what most invasion stories won’t: The fight wouldn’t be easy, it wouldn’t be pretty, and there’s a good chance the human race’s attempts to destroy their invaders would fail horribly. It’s from desperation like this that true greatness becomes possible.

Enemy Unknown follows in a classic tale of alien invasion, with near-future Earth interfacing with a violent alien race for the first time. As the commander of the XCOM initiative, you’re tasked with protecting humanity (and taking part in extraterrestrial combat), on a mission to beat the newly-discovered alien threat back to the speck of light it came from. From a war room stationed underground in the country of your choice, you’ll oversee every move XCOM makes, scrambling fighters to shoot down enemy UFOs, deciding which countries to protect from invasions, and even prioritizing the analysis of recovered alien objects. It’s a unique way to handle the genre, but it fits well, providing an unorthodox gameplay structure that feels classic, and yet incredible modern in its execution.

Check out the video review to see XCOM in action

You’ll be tasked with spinning many plates fairly quickly, but once you’ve grasped what it is to be the commander of XCOM, you’ll undoubtedly enjoy the more strategic approach to fighting an alien threat, even if it proves more difficult than simply blowing them up.

When missions crop up, they’re usually of the “damned if you do, damned if you don’t” variety, giving you the option to intervene in one of a number of conflicts occurring concurrently. Protecting one country over another will see the other’s panic levels rise, which, if left unchecked, can lead to the ignored nation pulling support--and money--from XCOM. If too many people pull their funds, the XCOM initiative is eventually shut down, creating a “Game Over” scenario that many modern gamers might not be used to seeing.

Even dissecting aliens and researching different recovered artifacts has important rewards and repercussions, giving you insight into the new races you discover and letting you build the necessary tools to defeat them. Using the tech gathered you’ll also be able to upgrade, improve, and customize your units, preparing them for the many inevitable battles.

And though you can spend a lot of time making decisions from behind a desk, a majority of the time you’ll spend in XCOM is in commanding units to battle alien foes on the ground. It’s here that XCOM goes from an engaging alien defense force simulation to one of the best tactical games in years.

XCOM’s grid-based combat has you commanding units to take cover, find better positions, and attack the alien forces in turn-based battles. These encounters are remarkably tactical, superbly rewarding, and absolutely brutal. It’s a game of weighing odds, deciding if it’s worth moving a unit to attack an enemy or biding time to lure them into a trap. Each move is so important that you’ll have a hard time not obsessing over it, even when you’re not playing, working out troop arrangements and squad customization concepts in your head before attempting to execute them when you’re back in-game.

One poorly placed troop or risky move and the entire mission can go up in flames, resulting in the permanent death of your soldiers--something made even more heartbreaking if you choose to customize the squad members, fueling your emotional attachment by assigning digital souls to your digital soldiers. Losing a soldier can be devastating, both in terms of your mood and your progress through the game’s 12-15 hour long campaign, leading to you potentially consider restarting the entire thing over after a few failures (mainly if you play with Iron Man mode, which removes the ability to save on demand, and replaces it with an autosave after every action).

This threat--this ubiquitous likelihood of bitter failure--makes the successes so much sweeter. Your heart will stop every time you move your high-level units into uncharted ground, and you’ll be breathless when you finish off the last alien and see the mission success screen come up.

And yet, for as enjoyable as the strategic battles are, you might sometimes feel that chance plays too large a role in this otherwise mathematical outing. Losing a high-level unit to a poor move is one thing, but having your entire team miss attacks with a high percentage of success only to have an alien opponent critically strike your best warrior from afar is frustrating and, often, doesn’t feel fair, probability be damned. Camera problems, too, occasionally make finding a new position to attack a chore, and can sometimes lead to an errant action putting your entire team in danger. These flaws are less of an issue in multiplayer, which allows two players to compete in the game’s battles after assembling a team of humans and aliens. Still, the issues detract from the overall experience, and occasionally make a bad situation worse.

XCOM: Enemy Unknown elicits feelings of nostalgia you might not even realize you have--but not necessarily for an earlier era of gaming. Researching new equipment and customizing your soldiers is like a trip to the toy store, and bringing them to the battlefield feels like ripping open the packaging and playing with that new, awesome toy for the first time, discovering all it can do and testing its limits. Firaxis has done a remarkable job at adapting the classic gameplay of XCOM in a way that should satiate both fans of the series and those new to the genre, and though it’s capable of being brutally difficult, it doesn’t shy away from rewarding you for your successes. It’s a game that should absolutely be played by anyone interested in a more strategic take on the cliched alien invasion story--so long as you’re not afraid to lose a fight once or twice.