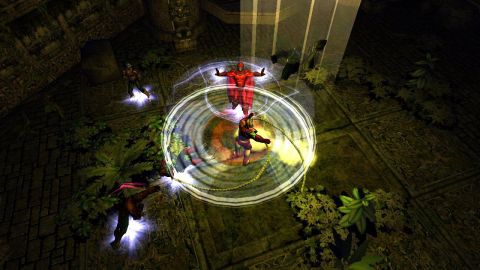 The sequel to one of the best comic-book games ever made, X-Men Legends II offers more of what made the original so much fun while streamlining some features to make it more approachable. The game is a dungeon crawler similar to Baldur's Gate: Dark Alliance and Champions of Norrath. This time around, the X-Men team up with their enemies to stop the menace of Apocalypse. In videogame terms this means running through a number of levels, beating the crap out of lots of little things, beating up some big things once in a while, finding lots of items, and talking to lots of people.

Activision has subscribed to the theory that more is better for this sequel. There are more mutant powers, more varied levels, more secrets, more hidden characters, and more options than the original. In some cases it totally works. The additional powers are the most notable addition. If you've read the comics or watched the movies then you know that the X-Men attend a school to learn how to use their powers, so it makes sense that Cyclops' optic blasts come in 31 flavors...and each are delightfully fun to try out.

In the case of items, more is simply more. In traditional dungeon crawlers, it's normal to come across 19 varieties of longswords and 27 different kinds of chain mail. In a mutant adventure it seems out of place. Nobody cares about what kind of belt Storm is wearing. The Juggernaut isn't any more or less menacing because he's wearing nanofiber armor. And the X-Men have never saved the day because Sunfire astutely equipped the Exodus Cloak. The overabundance of items is a forced attempt adding depth.