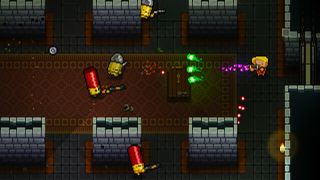 I finally get it. After years of beating my head against games like The Binding of Isaac, Rogue Legacy, and so many of these procedurally generated dungeon crawlers - also known as 'roguelikes', named as such due to the concepts they borrow from a 1980s dungeon generator called Rogue - I've finally found one that's pulled me in almost instantly. It's called Enter the Gungeon, and while I'm only a few hours in, I'm finding that its adorable veneer hides a tough-as-nails challenge that continuously rewards you the more that you play it, combining the randomness of roguelikes with the skill set demanded by the most gruelling bullet hell shooters.

There are a few core ideas behind any roguelike, and Enter the Gungeon is no different. You pick from a handful of characters, each one with a handful of weapons and items unique to them - the Pilot has a lockpick which gives him a random chance to open a treasure chest without a key, for example, while the Hunter's dog has a higher chance of finding items in each room - and each one with a specific reason why they're heading into the Gungeon, in search of a weapon that can kill the past. You then begin your run on the first floor, with its layout, enemies, and rewards arranged randomly each time you play. As you make your way through this maze of rooms and corridors, you'll gain money which you can spend in a shop found somewhere on each floor, and use the various items and weapons you find or purchase to defeat each floor's boss in order to descend to the next floor. Repeat until you win - or, more likely, die, thus losing all of your progress and items gained up to that point.

It seems counterintuitive to put so much effort into devising a system where character upgrades are so impermanent, but roguelikes - and Enter the Gungeon, specifically - are all about making the best of the hand you're dealt. Sometimes you'll have a great run, and you'll get every item that you need to blast through the opposition. Other times, you'll get swarmed in the first room, and your run will be shot down before it ever gets off the ground. That's just how these things go when you play a game built around random generation.

Enter the Gungeon's real reward, then, is knowledge. Experience. Memorization. Each time you die, you learn a little bit more about what the items and guns you pick up actually do (all hand-crafted and filled with hilarious lore you can read in an in-game glossary called the Ammonomicon once you pick them up). You learn how the rooms fit together and the best ways to navigate them. You also learn what the enemy's bullet patterns are, the best way to flip tables to give yourself some cover, and how to dodge-roll through seemingly endless streams of gunfire - because Enter the Gungeon is as much a bullet hell, inspired by great 'shmup' classics like Ikaruga, as it is roguelikes like Binding of Isaac. The first time you come up against Gatling Gull at the end of a level (inspired by Vulcan Raven from Metal Gear Solid, but as an actual raven), you're probably going to get trounced. After the third or fourth time, you're weaving around its bullets like a pro, taking it out in record time.

These are all things that exist within roguelike masterpieces like Binding of Isaac or Nuclear Throne, but Enter the Gungeon marries its permadeath challenge with a charming, pixel art style and an unabashedly goofy sense of humor. The enemies are bullets with cartoony smiley faces permanently affixed on their shell casing torsos, shooting you with the pistols, shotguns, and AK-47s they're holding in their adorable hands. The weapons you find range from the conventional, to the ridiculously powerful, to the downright bizarre. One run, I found a gun which transforms enemies into chickens if you shoot them enough. I also found a T-Shirt Cannon. It fires T-shirts in rapid succession, knocking opponents back and leaving piles of pink T-shirts on the ground in your wake. There's also a weapon called the Gungeon Ant, which alternates between shooting oil on the ground, and flammable bullets each time you reload. To reveal any more about the game's numerous and increasingly wacky guns would be spoiling most of the fun. Suffice it to say that most waffle between being incredibly useful and absolutely ridiculous, but all are a blast to use.

The more you play, the more you learn how all these pieces fit together, and the better you get at besting its challenges. You also earn a special currency which lets you fill out your armory with even more inventive and powerful weaponry - but like everything else in the game, you have to earn the privilege to do so before you can spend a dime. Enter the Gungeon doesn't reveal its secrets willingly, but putting in the effort reveals a wealth of new opportunities.

I've probably spent a dozen hours over the weekend playing Enter the Gungeon on PS4, and I could easily spend several dozen more playing this game, learning its quirks, and uncovering its myriad secrets. There's always something to master, some new weapon to find and exploit - and one of them might just happen to be a banana, which explodes into three additional exploding bananas. If there's any other roguelike with such a potassium-rich weapon of mass destruction, I haven't heard of it.