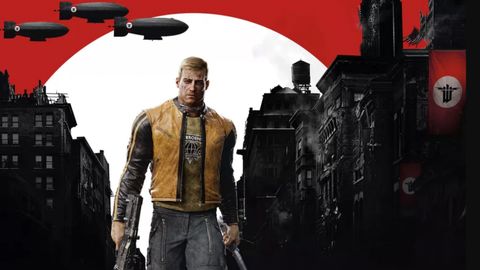 Wolfenstein 2 offers slick shooting, plenty of spectacle, and heaps of fun characters to interact with. The plot is far from perfect, and levels are a touch dull, but overall it’s a must-play.

Wolfenstein 2: The New Colossus is a bold game. Not just in the way it depicts the savage violence you - as thoroughly broken hero BJ Blazkowicz - inflict on the entire Nazi army, but also in the way it tells its story and treats its players. New Colossus mixes its ‘zero-fucks-given’ design philosophy through everything it does, from the ridiculously over-the-top story and tech within it, through its characters, and right down to the pacing and design of each level, and the difficulty of each scenario in them. It’s anarchy bottled, shaken up, and sprayed liberally in your face when you dare to open it up. The results are mostly positive, but not always so.

The plot sees you, as Blazkowicz (or Terror Billy to the Nazis), wake up aboard stolen U-boat Eva’s Hammer. Exhausted and wounded after the events of the first game, you can’t even walk… but that doesn’t stop you single-handedly repelling a boarding party of Nazis as their commander, Frau Engel, continues her relentless pursuit of you and the remainder of the American resistance. In this historical timeline the Nazis didn’t just win World War 2: they crushed the allies, and nuked half of the US. Perhaps that’s what makes you furious enough to murder them in swathes, even if you’re confined to a wheelchair and only have half-health. The rest of the game sees BJ taking out strategic Nazi targets to try and liberate America, and dealing with events a little closer to home.

See, this time we find out about Blazkowicz as a person, and there are numerous call-backs to his childhood. I won’t spoil them here, but let’s just say his upbringing wasn’t the kindest, and does a great job of explaining how he turned into such a righteously furious killing machine later in life. As mentioned before, Machine Games is pulling zero punches with the depiction of BJ’s life, and while the brutality of his childhood is in keeping with the aesthetic of the rest of the game, it borders on the comically evil at times. Think of a ‘bad childhood’ stereotype, and it’s probably in here.

The rest of the plot is all righteous fury, ridiculousness, and well-written monologues. Spending time with each of the game’s characters is a genuine delight, and there are some of the best one-liners in all of games to be heard. Sadly, there’s little cohesion or overarching plot keeping all the pieces in place, and it can often feel like you’re playing a series of mood-pieces tied together by the central hero. It’s not a huge deal - you’re here to murder Nazis and be entertained by the offbeat resistance characters you meet - but the shift from one level to the next can feel jarring, and could have been much better finessed. It’s an odd flaw in an otherwise exceedingly polished game.

So, how is the combat? Slick and bloody. Wolfenstein 2 captures the spirit of old-school shooters perfectly, while keeping a few tricks up its sleeve to make the action fresh. Dual-wielding genuinely makes combat feel different to vanilla, single-gun use, and there some neat stealth and exploration options mixed in with all the straight-up violence. Weapons are well balanced and satisfying to use, with some genuinely creative firearms letting you literally vapourise Nazis or burn them into small, crispy chunks. In other words, the pace is always varied, and you’re unlikely to get bored while you’re actually firing a weapon or swinging a hatchet.

Wow - Wolfenstein 2 went there. See the secret cameo in the game...

What isn’t so great is that the signposting is poor, and levels are far from a delight to explore. Sure, areas like New York, the base underneath Roswell (seen in all the pre-release footage), and all the later levels are absolutely rammed full of collectables and weapons to snag but… they’re all very drab. Endless corridors of grey, or maze-like buildings crumbling into dreary swamps, these stages really don’t inspire me to dig out every last secret. What’s worse is that they look so samey, it’s very easy to get completely lost and spend ages backtracking before you find the way forward. Later levels do vary the colour palette a little, but they’re all on the spectrum between brown and grey.

Once you’ve beaten most of the game you can head back into areas and explore them for secrets and special ‘Oberkommando’ targets, but the desire to revisit any of the stages is pretty low. Wolfenstein 2 does theoretically offer decent replay value in that respect, as there is so much to find and replay. Sadly, the drabness of the actual environments in which you fight likely means you’ll think twice before diving back in. It’s not a huge deal, as the story itself is a meaty 15-20 hours depending on how long it takes you to beat certain scenarios, so there’s heaps of value here.

Speaking of repeated scenarios… there are certain sections in the New Order that I found teeth-grindingly frustrating, because Terror Billy faces such overwhelming odds in relatively tight spaces. And it’s often the relentless onslaught of enemies and the brutal checkpointing that feels the most unfair. Hey, challenge is good in a game, and the gunplay is solid enough that you don’t switch off after the 20th retry, but these sudden spikes do leave a slightly bitter taste. There are ways around some of the tougher combat sections, especially in the second half of the game, but Wolfenstein 2 rarely gives you an inch of ground cheaply - you’ve got to work for each sweet victory.

What else is there to do? The list of collectables is longer than Terror Billy’s Nazi rap-sheet (although they’re largely pointless), and the hugely entertaining cast of characters all demand to be interacted with as frequently as possible when you’re roaming around the off-mission hub area, Eva’s Hammer. Each member of the resistance is uniquely smart and flawed at the same time, never predictable, always fun to watch or listen to. You can even pick up neat little side-missions from them, which can lead to decent rewards if you see them through. They’re far more interesting than replaying levels to track down Oberkommandos.

And a special mention goes to main antagonist Frau Engel, who is a horrible delight. Like all good villains she’s unpredictable, vaguely deranged, and utterly insidious. One sequence mid-game is absolutely astonishing in its subtle brutality, and it casts new light on not only Wolfenstein’s plot but also the representation of all bad guys in games. Not since Vaas from Far Cry 3 have we witnessed anyone as horribly transfixing.

Much like Engel, everything in Wolfenstein 2 is gloriously over-the-top. That’s both this game’s strength and its weakness. The plot is ludicrous, smart, bombastic, and disgusting in equal measures, taking players to the extremes of what AAA games are capable of. Action too is wonderfully violent, featuring guns that burst flesh and melt bone with unparalleled ferocity, all done at a pace that rarely lets up. Similarly, though, the story cares so little for convention that it jumps randomly from place to place to justify its insanity. Combat occasionally loses the run of itself, punishing players a little too severely in an attempt to up the ante from previous levels and justify some of the narrative’s extravagances. So there are definite upsides and downsides to all the bombast.

In all, though, Wolfenstein 2 is a great shooter, with a cast of characters the likes of which you’ve never seen before in a video game. Yes, the plot is flaky, and there are some moments - you’ll know them when you see them - that will make you shake your head in disbelief. And sure, you’ll get stuck, and you’ll curse the TV, and then… you’ll retry. The action is just that good, and you’ll always be driven to kill that next Nazi, to hear what your favourite character is going to say next, and to take your revenge on one of the most hateful antagonists to ever grace a screen. Be bold, in this boldest of games, and you’ll have a blast.

Wolfenstein 2 offers slick shooting, plenty of spectacle, and heaps of fun characters to interact with. The plot is far from perfect, and levels are a touch dull, but overall it’s a must-play.