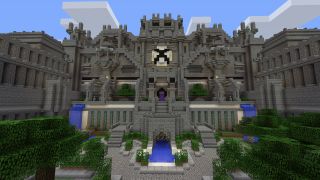 It speaks volumes that a game which has been on Xbox since 2012 and looks like smudged doodles on a piece of graph paper still feels new and compelling. No matter how many times I play it, I always end up doing something different, be that stumbling across some impressive scenery or building myself a giant, woolly pig to live in. I may take breaks for months at a time, but Minecraft is a game I’m always drawn back to.

Thanks to an update just before Christmas, the console version now has heaps more to explore, including The End cities and flying with Elytra. This means it’s finally on par with the PC version. The only problem with Minecraft is that even though I really want to try out all the new stuff, I have to be lucky enough to find it first... and all of it’s locked behind a notoriously difficult boss... and there’s loads of work to do before you can even reach said boss.

Luckily, Creative mode is designed for the lazy like me, so instead of taking days to prep enough to fight the Ender Dragon, it only takes five minutes. After a bit of blundering around trying to get gateway portals to work, I zip away to an island in The End and get incredibly lucky. While you could search for hours trying to find an End city I found one on my first try. It’s grand, purple and branches off in multiple directions with towers sprouting upwards from narrow stems.

After scoping the place out for some seriously impressive, enchanted loot I hit the motherlode – an End ship. Floating a little distance from the city itself and bearing the head of a dragon as its figurehead, it’s a foreboding sight and is home to an Elytra – the best item in all of Minecraft. It’s essentially a pair of wings that you can wear as a cape, letting you glide around the world. Sure, you can already sort of fly about in Creative mode, but not like this. The Elytra are so much faster and more natural, letting you swoop down through ravines and bank around corners with ease. As you pick up speed, the wind whistles past your ears, and you suddenly realise how untouchable you are as the ground speeds by beneath you. It’s empowering.

Elytra are also wasted in the End where there’s nothing to see except beige soil and hazy mauve skies that stretch out for miles. It’s a shame that this is where you get your first taste of using them when they’re far better suited to the hills of the overworld and dodging past Ghasts and lava flows in the Nether. Taking them outside for the first time is a revelation; at first I was gripped by fear and the sensation of falling before pulling up just enough to skim along a nearby river. It’s exhilarating and completely changes the way I look at Minecraft’s blocky landscapes. Now I’m constantly hunting for mountain ranges and ice spires to weave through at speed.

The Elytra wings have also changed the way I look at my builds. While I usually opt for petite farmhouses and quaint villages, now I’m thinking about building vast metropolises full of skyscrapers and possible obstacles to fly past. I’ve laid the groundwork for a series of doughnut-shaped towers lined up in a pleasing fashion just so I can swoop through them.

Each tower will take me hours, placing each block by hand, but, like waiting ages for a short rollercoaster ride, that burst of adrenaline as I soar through them will be worth it. It isn’t great city planning for anyone who wants to live there, but at least the commutes would be more exciting.

I’ve also become a lot braver in my play style by wearing them. I now feel compelled to jump into any dark, cavernous hole just to see how far I can go without crashing to my inevitable death. Before, I’d spend ages meticulously placing torches to make sure I wouldn’t get lost. Why bother when you can zip around?

Suddenly Minecraft has become an exploration game again. I’ve seen forest and desert biomes hundreds of times before, but the Elytra let you see them in a whole new light. Towering, impenetrable jungles feel like small, lush oases in seas of plains from above, and the sands of deserts quickly give way to vast oceans. It’s also far easier to find temples and abandoned mineshafts when you can see a whole biome at once.

I’m surprised by just how much a singular item can change such a large game. I’m no longer settling for building in the biomes near a spawn now that it’s easier to find somewhere more exciting further afield. And even my builds are being planned with Elytra use in mind. Flying grants you the type of freedom you didn’t even know you wanted in Minecraft and once you have it you’ll wonder how you ever survived without it.