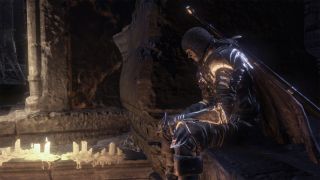 It's all ashes. At least, that's the kind of gloomy, defeatist attitude you can expect when chatting with Hawkwood, one of the very first NPCs you meet in Dark Souls 3. The Souls series has a clever throughline of designing NPCs to fit certain archetypes, and Hawkwood the Deserter is the latest iteration of the Crestfallen Warrior. I've always had an appreciation for this particularly cynical personality, which traces all the way back to Demon's Souls and serves as the one of the earliest figurative signposts that the player encounters. But for all his complaining and misanthropic negativity, Hawkwood is truly special for the way he elevates the archetype beyond its tried-and-true purpose.

To understand how, let's break down the bigger picture of what the Crestfallen Warrior represents. These NPCs are among the first you'll come across in any Souls game, seated somewhere in the main hub of the grim high-fantasy world you're exploring. When it comes to looks, they're infinitely more relatable than the ghouls and skeletons you've been slaying thus far; because they're not wearing helms, so you can clearly see that they're human, just like you. And though conversing with them is ultimately helpful, as they'll give you hints on where to go and who to slay next, they seem dead-set on dissuading you from taking any progress-enabling action. The Crestfallen Warrior had all the same opportunities as you, the player: he too entered this world as a reanimated warrior capable of fighting for a cause, and clearly knows the landscape well enough to traverse it. Yet he'd rather idle around a safe area, staving off death through complete inaction and doing everything he can to convince you that trying is hopeless; better to just not bother.

This personality type takes slightly different forms in each Souls game (though these NPCs always have an affinity for despondent chuckling). Demon's Souls' Crestfallen Warrior slowly loses his mind, Dark Souls' version would rather stay put and scoff at your attempts at heroism than try and fail himself, and DS2's somber Saulden the Crestfallen Warrior doesn't believe in anything anymore, saying "To be alive, to walk this earth - that's the real curse right there." All three are equally glum (and endearingly portrayed by voice actor Matt Morgan), existing as illustrations of what you'd be like if you habitually folded in the face of adversity. The Souls series is lauded for its demanding difficulty (though the games are more teacher than taskmaster), and the Crestfallen Warrior exists as the logical conclusion of who the player would be if they readily gave in to defeat. These nihilistic killjoys are eager to despairingly throw up their hands and say "screw it", rather than try and try again after experiencing the repeated deaths that every Souls player goes through at some point.

Hawkwood starts out just the same as his predecessors. There he sits, passing the time by basking in the warm, safe glow of the Firelink Shrine bonfire. Simply striking up a conversation with him rewards you with the 'Collapse' gesture, perfect for when you want to convey to other players that you're feeling completely dejected. From his opening lines, Hawkwood's evidently given up, saying, "We Unkindled are worthless. Can't even die right." And regarding the Lords of Cinder, the legendary bosses you're endeavoring to defeat, Hawkwood's convinced that "We're not fit to lick their boots", let alone slay them and restore order to the world.

But as you venture further into the treacherous world of Dark Souls 3, Hawkwood finally decides to take action. Dozens of hours into the game, after you've stumbled upon the harrowing secret area known as Archdragon Peak, Hawkwood somehow catches wind of your beast-slaying prowess and the empowering Dragon Stones you've collected. He abandons his usual moping post (which has surely left a butt-groove in the stone by now), leaving behind an item with the blacksmith that hints at his whereabouts. Locate Hawkwood, and you'll come to realize that he's just as adept a fighter as one of the bosses you've previously battled. Before charging at you with both blades drawn for a duel to the death, Hawkwood makes a declaration: "I've decided to stop running from my fate. Loathe me all you like; I shall take what makes you dragon."

Whether you decide to kill Hawkwood or flee from him is up to you, but by devoting himself to a purpose, he's risen above all the Crestfallen Warriors that came before him. Hawkwood has evolved beyond being his miserable existence as a gloomy sadsack, and perhaps you've even managed to inspire him - even if his mission is to kill you and take the items you've rightfully earned. After an entire series spent struggling to overcome seemingly impossible challenges, your efforts have finally spurred on a do-nothing downer to find meaning in a harsh world and strive towards a singular purpose. Just as you have a burning will to overcome whatever death traps or boss fights that Dark Souls 3 can throw at you, Hawkwood is now fixated on slaying you and taking your power for himself. And that desire to actually do something is what makes Hawkwood such a marvelous exception to his Crestfallen lineage.