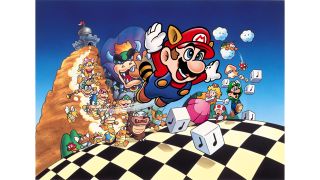 Issue 203 of Retro Gamer celebrates the legendary Super Mario series. We quizzed a number of industry veterans, including John Romero, Ste Pickford, Chris Sutherland, Derek Yu and Julian "Jaz" Rignall to find out what makes the 2D Mario games so special and the impact the franchise has had on them.

Jon Romero reveals how "the amazing control and the huge amount of variety in the eight worlds" led to id Software pitching a PC conversion of Super Mario Bros 3 to Nintendo, while Ste Pickford is impressed by Mario's 'jumping on enemies to kill them' mechanic, telling us "it annoys me when it's used in other games as it feels like a unique feature of Mario, and one that you shouldn't rip off."

Derek Yu's Spelunky was inspired by the Super Mario series with Derek revealing that "one thing I studied closely while working on Spelunky were the little touches in Mario games - the 'poofs' that appear when Mario runs, the sparkles that appear when he grabs a coin, etc. For me, a big reason why Mario is so enjoyable are those flourishes that we're not always conscious of but we definitely feel as we play."

In addition to covering the Super Mario series, issue 203 of Retro Gamer has plenty more to enjoy, including an in-depth look at Mark Cerny's popular arcade hit, Marble Madness, an exhaustive historical look at Electronic Art's popular Strike series and an insightful article on the incoming Spectrum Next and the difficulties that come with making a modern Spectrum for today's gamers.

Additionally we go behind the scenes of a number of classic games, including Stormlord II, Full Tilt! Pinball and Nosferatu The Vampyre, reveal some of the greatest import games that still haven't been localised for the west and find out what Andy Palmer has in store for his third Arcade Club venue. There's plenty more to enjoy, including Lemmings, Ridge Racer and Strider 2, so don't miss it!

The Super Mario series is celebrated in the latest issue of Retro Gamer which is on sale now in all good UK newsagents. Mario fans based in the US can subscribe to the digital edition of Retro Gamer for as little as $9 for three issues.