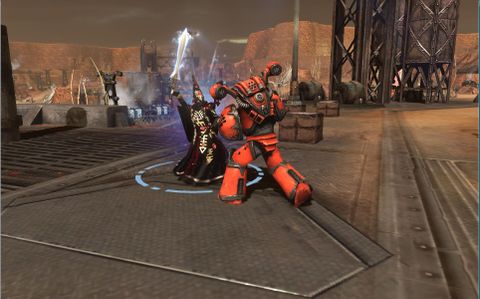 Okay, they really need to do something about that title. It’s almost like they’re going for Capcom’s style with its “Street Fighter EX Plus Mega Alpha Ultra Face Punch Nose Smash Edition 2 Turbo.”

Before we even talk about the game, let’s talk about that price. This is a huge offering for the $30 sticker on the box. Retribution is a standalone expansion, so you don’t need to have any other version to get it working. Your 30 notes will do the trick. And for that you get all of the multiplayer online goodness you’d expect from previous titles. It includes The Last Stand mode, which pits three players in a co-op mission to survive as long as they can against increasingly difficult waves of enemies. And – the main new feature – it comes with six individual campaigns, one for each of the game’s races, each lasting around eight hours. There’s a lot of meat on those bones.

It’s a breath of fresh air for series fans who will appreciate being able to control the race of their choice instead of being restricted as in previous entrees. You have a new race to try out too – the proper English Imperial Guard, mate.

With the privilege to play as every race comes the inherent variety in the units you’ll need to master, each with distinctively different powers that allow for differing strategies for tackling each mission. Each campaign’s eight-hour length sounds incredible but there’s one major catch: we’d say that 70 percent of each campaign is made up of mostly the same (or at least incredibly similar) missions that have been slightly modified to fit the race you chose to lead. While there are some differing scenarios, the sense of repetition for the most part is more significant with each campaign you play. It’s especially excruciating when the game forces you to go through the same basic tutorial-style missions at the start of each campaign before the real action can begin. This is something even those new to the series will grow tired of, so we really pity seasoned Dawn of War experts.

This repetitive approach also means the plot is more basic than the very narrative-focused Chaos Rising, since it’s basically the same overall story that’s intentionally simple enough to be nicely laid over the top of all six campaigns. Ten years after the events of Chaos Rising, Auralia is the setting for all manner of wars between the game’s six factions, each with its own mini sub-plot (or rather excuse for being in the game). The overarching issue, however, is the entire region being under threat of “Exterminatus” – essentially the wiping out of all life in the colony, including your chosen troop should you fail to complete your mission on time. Chaos Rising was short, but its story far more compelling.

These aren’t the only significant changes Retribution makes to the series. Dawn of War II went against the grain by having you manage small squads of “Hero” units, and this has become part of its appeal and what sets it apart from other RTS games like Command & Conquer and StarCraft, which have you building up armies of hundreds. But, almost taking a small step back in the traditional RTS direction, Retribution allows you to build units and vehicles mid-battle to boost your squad. As you progress through missions you encounter outposts that can be captured, serving as a checkpoint of sorts and allowing for the creation of more units. Your maximum unit limit keeps things sensibly around the couple of dozen – well below the brain-melting numbers of those aforementioned games, but adds a new layer of chaos to battles.

Despite still having limited units, Retribution ups the player’s workload with special abilities unique to each unit. As you progress through the game you unlock new powers and items, from guns that inflict increasing amounts of devastation to new special abilities that allow for more cunning strategies. You can sneak into bases with stealth, mount powerful gun turrets, throw explosive grenades, launch rockets, and even have your squad leader execute one of his soldiers to incite a sinister but effective motivational boost to the rest of the squad. But the true appeal to all this is almost endless amounts of choice – it doesn’t just give you everything but asks you after each mission to choose which of the available goodies you wish to acquire. This lets you tweak and shape your army in your own unique way.

Add to this a clever cover system, which lets you use parts of the scenery for extra protection against enemy fire, and the ability to commandeer buildings for even further enhanced defense and Dawn of War fans will find an almost overwhelming number of tactical options open to them in any given shoot-out.

With all this enhanced functionality you’d expect a control system that can keep up with it all. But Dawn of War II’s UI hasn’t been sufficiently updated to handle the required rush of input in as streamlined a manner as we’d have liked. It’s by no means terrible, but controlling individual units, selecting each power repeatedly, plus zooming and panning the camera feels more cumbersome than other top RTSes.

We also had issues with load times – on a PC that packs enough of a punch to run the game effortlessly with everything cranked up to the max. Changing graphics settings, loading maps and even finishing a mission would cause a discomforting hang time that lasted long enough for us to think it had crashed. Some optimization to be done there, we think. That said, it really is a nice-looking game, especially when the action picks up. Lasers and explosions fly everywhere, the units themselves pack plenty of detail with smooth animations, and the mix of organic and industrial levels keep things looking fresh.

And with the game’s shift from the diabolical Games for Windows Live to the far superior Steam, all of its multiplayer functionality is greatly improved, making pairing up with friends or facing off with strangers a much smoother ordeal.

Dawn of War II - Retribution is not a genre-beater; it has its issues. But none of its niggles stop it from being a great RTS romp. It still offers that unique Dawn of War II experience, deep strategy, interesting (although repetitive) missions and is one hefty standalone package for the $30 asking price.