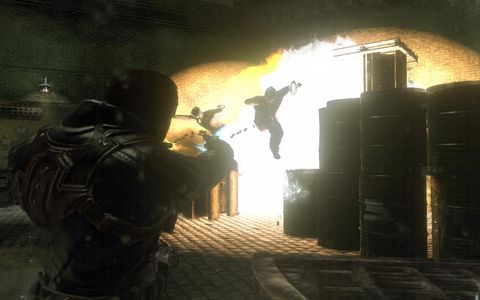 For four hours, Wanted makes you God. Can’t quite hit the guy behind cover? Curve a shot and you’ll get a slow-mo view tracking your bullet all the way to that perfect headshot. Up against a small army? Dodge from cover to cover, then bring time almost to a halt, blazing through half a dozen enemies in a single cover-to-cover jump. Burned out your bullet-time? Stab someone to top it back up.

Even on the hardest settings, the game is a stab frenzy if you’re a would-be ripper. The melee kills are brutal, instant, and easy. Jagged James McAvoy moves at such speed and there’s such an abundance of cover, it’s easy to close the gap and go for a dose of the old Corporal Stabbington on one of the ten million cloned bad guys. Wanted will make you feel strong; for one afternoon, it’ll turn you into an action hero like almost no other game – you look and sound like a wimp, but you’re an unstoppable truck, rushing through stages leaving stabbed faces and shattered kneecaps in your wake.

Those mechanics, which are so clearly gimmicks, keep every firefight just about fresh enough. Grin’s take on Quick Time Events – shooting bullets out of the air and blasting enemies in between scripted sequences – occasionally pop up, and are just enough that they never outstay their welcome. The boss fights are few enough that Grin never run out of ideas. The mounted gun bits are so rare you’ll barely remember them, four hundred bodies later.

There’s obvious game-extending ‘ctrl+c, ctrl+v’ action in later missions, as if Grin were desperate to get the game out the door, but any longer and Wanted would be too much. A junk meal rather than a junk snack. Nobody wants a quadruple cheeseburger with a quart of mayo, and nobody could bear more than nine levels of Wanted, but for those nine levels you’ll feel satisfied, even with the floppy lettuce baddies and processed cheese level design.

No critic could recommend Wanted: Weapons of Fate at full price, but for the cost of a couple of movie tickets or a DVD it’s one night’s worth of more-than-satisfactory bloodshed, cussing, overt sexual references, and ultraviolence. Like that Smackdonald’s burger, you’ll never look back on it as the best meal you ever had, but for that one guilty night it’ll leave your belly stuffed and satisfied.