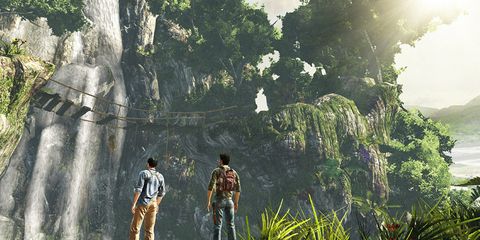 It seems too good to be true, doesn't it? Nintendo barely ever has a new Mario game for console launches anymore, Microsoft didn't have a Halo at Xbox 360's launch, and yet, somehow, Sony has an Uncharted ready for the Vita's launch? And yet, it's true. Bend Studio, developers of the PSP Syphon Filter and Resistance games, actually managed to pull together a full-fledged Uncharted game for the launch of the PlayStation Vita, and yes, it's the real deal. It's a fully voiced, action-packed Uncharted that looks and feels like the console games.

Despite falling victim to a number of missteps that keep it from achieving the greatness we've come to expect from the Uncharted series, Uncharted: Golden Abyss manages to be a great game in its own right, and one that sets the bar for the genre on handhelds.

Above: Yeah, that's running on a handheld

Turns out Drake's adventures with Elena and Sully on the road to El Dorado were far from the half-tucked hero's first rodeo. Golden Abyss takes place several years before Drake's Fortune, and features a somewhat more naive Nathan Drake climbing around ancient ruins. He's more trusting, misguided, and really isn't completely sure why he's risking his life hunting treasures. The vigor-filled protagonist from the console games he is not – in the beginning of the Vita title he's little more than a charming archeologist for hire. Well, an extremely charming archeologist who has no issue murdering a few hundred enemies to get to a golden idol.

It's best not to go into the game expecting some grand revelations about Nathan's past. Golden Abyss isn't trying to be the Star Wars prequels. You're not going to run into enemies from the later games, or learn more about Drake's relationships with some of the characters that show up in the sequels. It's a prequel because Bend didn't want to (or wasn't allowed) make a sequel, so it sort of needs to begin and end on the same note. It's not the next chapter in the Uncharted series, it's an episode of the Uncharted TV series you missed.

Above: We walkthrough a live review of Golden Abyss

That's not a complaint, though – if anything before Uncharted: Drake's Fortune was interesting enough to talk about, odds are Sully or Nathan would have brought them up in a later game. The intentionally unmemorable style works, and leaves the door open for many other games that could take place before Drake meets Elena, as long as they all set things back to zero before the credits roll.

The same can be said about the story, on the whole. There aren't any sudden supernatural elements thrown into the game, or shocking revelations that will change Drake's life. It's just sort of a cool story, with Drake traveling through a typical assortment of jungle ruins and caves. In that, it's essentially retreading over the same areas that the first Uncharted did, with one major difference: the level design simply isn't very strong.

Above: Oh no! Whats-her-face is being beat up by that guy!

Some areas are fine, with clear goals and directions. Others are an absolute mess. On several occasions we'd find ourselves stuck for nearly an hour as we searched desperately for a path to get the next area. We'd scour every square inch of an area before realizing that we needed to make a jump that was double the length of ones we'd failed earlier in the game, or we'd suddenly trigger a cutscene after wandering back to a random spot. Level design has always been a high point in the Uncharted series, and it's a shame to see this element fall apart so entirely. It didn't happen that often, luckily, but it's hard to look past the few times it did.

Though the original Uncharted wasn't a launch title, it still carried with it the burden of proving the PlayStation 3's worth. Part of this meant using everything the system had, including the Sixaxis motion controls. It was temperamental, with occasional motion-controlled elements that really didn't fit with the rest of the experience. Golden Abyss, too, has the burden of proving the worth of the Vita's many different control inputs, meaning that we're asked to swipe at the touchscreen, spin our fingers on the back touchpad, hold the camera up to the lights, and do other motion-controlled hijinks to accomplish what we used to be able to do with a few buttons.

Above: Sniping with motion controls was simple and rewarding

In other words, be prepared for a lot of unnecessary poking, prodding, and rubbing. Like, more rubbing than you've ever done in a videogame. Drake will practically be tripping over dirt-covered objects he needs to rub, and finding carvings he needs to take charcoal rubbings of, and... yeah, there's a lot of rubbing. It's cute at first, but the 20th time Drake quips about cleaning off an artifact you'll be rolling your eyes out of your head. The same goes for assembling torn pieces of paper into maps or pictures. It sometimes makes sense, when it's related to the plot, but other times it just feels unnecessary and forced. Alright. Drake. We get it. You're excited to put this paper together. You love puzzles. But unless it ties directly into the story, maybe it can wait until after the adventure?

That said, we were absolutely shocked at how some of the other uses of the system's features improved the gameplay. Aiming and shooting can be accomplished with the analog sticks and shoulder buttons, though we were amazed at how often we'd use the system's motion controls to perfect our attack before firing. It adds a little finesse to the gun play, letting us get the right shot without fiddling with the analog sticks for too long. Grenades, too, are made easier with the touch controls, which turns tossing a grenade towards an enemy into an action as simple as dragging and dropping it where you want it to land. It only takes a second, and is much more precise than using the other buttons.