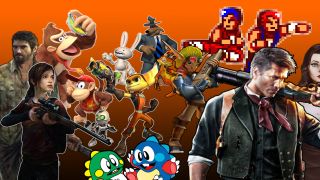 Buddy up, up, down, down, left, right, start

As the old song goes "One is the loneliest number that you'll ever do, but two two is absolutely fine and should suit just about everyone". That followed by a raging guitar solo, "something, something, something, monogamy", end of song. It's a powerful piece, and one that really speaks to the enduring appeal of the double act. Which is why we're here: to celebrate the best pairings in video games.

Games are overflowing with dynamic duos just waiting to be cosplayed by the next set of drunken buds and/or loving couples. So let's bloody well celebrate 'em, shall we? A word on criteria, though. I've decided to exclude any RPG parties from this list, partly because I'm just a crotchety old man, but mainly due to the fact that not every player will have hung out with these particular dudes and dudettes, even if they've played the game. Plus, I've also ruled that these folks must spend the majority of their games together, so no mo' mere advisors or fairweather friends. Oh, and spoilers ahead! Got all that? Good.

It's tempting to fill out this manful slide with a whole host of bro puns, so I will. BrOkami, Madden BrO5, LegBro Star Wars, Shadbro of the Colossus, Spybro the Dragon, Tony Hawk's Bro Skater 3, BrOverboard!, Broject Gotham Racing, Bro Evolution Soccer, Ha(y)Bro: Reach, Brome: Total War, Bro One Lives Forever, MariBro Kart, Brony PlayStation, no wait that's something else entirely The point is that Army of Two's steroid-addled pair are so damned macho, they make everything else around them just a little more ballsy.

Salem is the smart, strong and tactically astute soldier. Rios is his impetuous, over-eager bud (though no less deadly for it). Together they bridge the gap between straight up buddies and the classic sensei/learner relationship. Rios gives Elliot a good chuckle, and in return Salem yells at his friend to get that damn head of his away from any-and-all incoming bullets. It's a symbiotic thing, really. What's more, EA Montreal designed Army of Two as a fully-fledged co-operative experience all the way from the ground up, meaning these boys were meant to be together. So much so that forsaking your partner, even for a moment, is a sure-fire way to get the both of you killed. Plenty of duos come unstuck without their bud, but few become so irrevocably screwed as the AoT boys. Oorah!

'Heart-wrenching', 'moving', 'emotionally implosive': just some of the things that will never ever be attributed to the Bubble Bobble series. Where some games excel at showcasing the deep and poignant side of friendship, BB represents the rest. The silliness, the enthusiasm, that time you gatecrashed a baby's birthday party and proceeded to blow up every last balloon in sight all while shouting "POP!" at the top of your lungs. That was quite the Thursday

Some partnerships aren't defined by adventure, or by grief, or even by mutual interests. Sometimes all you need is someone to play strange, nonsensical games with, like guiding a set of miniature dragon things through an unending cascade of bubbles. So here's to you Bub & Bob. Together you're about as deep as a single sheet of paper, and we love you for it.

You'd best thank your lucky stars for the miracle of modern medicine. Without it kids of all ages would still be off scouring the land for all manner of life-saving salves. Sure, they'd be getting into all sorts of whimsical adventures and spooky situations along the way, but then they'd run afoul of a big nasty spider queen and suffice to say you'll never be able to look at that left analogue stick the same way again. *sigh*

Brothers: A Tale of Two Sons tasks its titular duo with seeking out a rare cure for their father's mystery illness. It's a tough old task, and one that rewards and punishes the lads' youthful navet in equal measure. Still, they stick together, working side-by-side to surmount a whole world's worth of peril and puzzlement. It's a testament to the strength of the game's central bond that both boys make it through their adventure largely unscathed... that is until one brother fatefully forsakes the advice of the other. Like any good duo, these two siblings really do need one other, often supplementing the other brother's skill set and making up for any-and-all shortfalls.

Here's a bit of a weird one for you. It turns out that Enslaved's main mover aka Monkey is actually in thrall to the beautiful Tripitaka. First she damn-near sentences the barbarian beefcake to an explosive early grave, the next thing she's using her extensive tech skills to fit him with a brain-bursting tiara. She commands, he obeys, she dies--even accidentally--and so does he. It's a raw deal, and one hell of a poor place to kick off a friendship.

Still, to Monkey's considerable credit, he takes the scared, though no less reprehensible Trip at her word, with assurances of his freedom once their mutual journey is at an end. From there, the two learn to cooperate and coordinate their actions like a well oiled machine, which is just as well, considering how many other well oiled machines are out to try and terminate the two. Many an in-game partnership has been forced upon its participants by dire circumstance, but few titles exhibit a central bond that grows from a place of subjugation. If nothing else, Enslaved's strange collaboration remains a unique, if slightly disturbing double act.

All 11th hour revelations aside, BioShock's Booker and Elizabeth make for one hell of a pairing. B shoots and E warps otherworldly clutter into the here and now. Some provides cover, the rest works as weaponry; in either case, Lizzy's tear-twisting abilities can prove pretty darn useful, even if she does prevent Booker from watching that sneak peak of Revenge of the Jedi. Ah well, he'll just have to wait another 71 years

Perhaps the single best element of this rough-and-tumble partnership is just how independent both parties are of one another. Unlike some teams who're practically attached at the hip, Elizabeth doesn't mind disappearing during intense moments of combat, allowing Booker to more easily focus on the action, and away from his otherwise vulnerable chum. The B man may be pretty damn handy on his own, though he's never quite as deadly as when that fingerless foil shows up to assist. Good apart, better together.

Yeesh, someone really takes their buddy system seriously, don't they? What is this, a school trip to the local paper mill or an epic adventure? Alright, alright, I suppose all that hand holding is somewhat necessary, after all Ico's only trying to safeguard his pallid gal Yorda from harm. As it turns out the girl's own mother is trying to steal Yorda's youth from her, a phenomenon that many of my female friends assure me is an ever-present threat.

So begins an arduous quest to escape the game's castle-set confines, with Yorda largely being limited to the role of damsel-in-distress. Sadly, mean old mum has decided to throw a small army of shadow monsters against the pair, with only Ico able to dissuade and defeat them. Yorda, for her part can grant access to certain locked rooms, a small, but vitally important contribution without which Ico's efforts would have been entirely in vain. In the end, what this quaint little duo helps to demonstrate is that a team needn't necessarily be equally skilled, or smart, or strong in order to prove equally valuable.

Before there was Dom and Marcus, Elliot & Tyson, Soap & Cap'n Price there was Bill Rizer and Lance Bean: brothers in arms and professional manly men. Together they take on mission after mission, blasting all manner of foes and frequenting all sorts of exotic locales (locales, it should be mentioned, that in no way infringe upon the copyrights of such 80s staples as Rambo and Aliens, no siree)

Unlike Lance's brother Sean, both of the Contra boys are largely silent--oh and nigh on unkillable--a fact that makes relating to either of them a wee bit difficult. So, instead of honouring these cookie cutter tough guys, let's all take a moment to appreciate the people behind the avatars. That's right, the gamer and their trusted player two, valiantly wearing off all four of their thumbprints in the name of finesse, firepower and victory-dependent friendship.

One's a cute, resourceful tomboy; the other's a quiet-type scientist with a secret. She's gunning for the goons who steam cleaned her father's brain, and he's--wuhoh *cheesy record scratch*--the man responsible for their arrival! Can these two crazy, mixed up kids ever learn to get along? Find out when Half-life 2: Episode 3, launches Christmas 2007.

Alright, so maybe that didn't happen, but that's no good reason to dismiss Gordon & Alyx's otherwise awesome partnership. Sure, Half-life 2: Episode 2 may have ended on a slightly sour note--particularly for those of us who enjoyed Eli's forehead exactly where it was--but this tale of two road-tripping companions added a whole new aspect to the Half-life saga. For once, the redheaded terminator just couldn't hack it alone, depending instead upon his techy partner and her pet robot to surmount the very worst of the alien invasion. With Gordon still too embarrassed to talk to women, Alyx picks up most of the conversational slack, inferring, enlightening and sharing the occasional zinger with our mute leading man. In fact, she practically performs the role of both 'buddies', a feat that makes this unusual double act all the more memorable.

Forever enshrined in the annals of gaming folklore, Billy and Jimmy Lee (make that 'Bimmy & Jimmy' in the NES copy of DD3) remain one of the few gaming duos to have ever crossed over to the silver screen... before crossing right on back again after one god-awful movie. Of course, none of that's really their fault. People love Double Dragon, just like they love kicking ass as the Lee's. The trouble is that like most of their contemporaries, these characters are only as complex as the 2D sprites they inhabit. Sure, they might have a basic backstory, or a genuine gripe against the bad guys, but that's really beside the point.

Fans adore these street-fighting siblings precisely because they're so damn good at punching hoodlums. They may look like a couple of Luke Perry clones out in their PJs, but damnit sometimes a masters' degree in martial arts is all the cool you need.