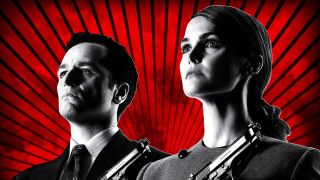 Naturally, the end of Game of Thrones last month left us dizzy with unabashed grief, and ever since we’ve felt a void in both our hearts and TV schedules. What do we do on a Sunday evening now? Who do we root for? What do we talk about come Monday? I have the answer. While even I can’t bring Thrones season 7 forward, I can introduce you to the best TV shows currently airing to take your minds off your Westeros withdrawal. From Hollywood’s big hitting award winners, to quieter cult masterpieces you may not have heard of, I’ve got your next 12 months of box-set bingeing sorted.

12. Orange is the New Black

If you haven’t raced through OITNB yet, now is your time. To recap, Piper (Taylor Schilling) is a nice middle-class girl who hung with the wrong crowd, got caught up in drug smuggling and is now serving time at Litchfield Penitentiary. Her fellow inmates include her ex-girlfriend from said ‘wrong crowd,’ a transgender diva, a ruthless Russian mob-boss-turned-prison-chef and a psychotic former meth-addict intent on destroying her. If you like gory violence, graphic sex scenes, and to go through an emotional rollercoaster of fear, disgust and hilarity - basically, if you like GoT - this is for you.

UK: Seasons 1-4 are available on Netflix.

US: Seasons 1-4 are available on Netflix.

For those with major Game of Thrones withdrawal, this is perhaps the closest you’ll get to a replacement. A period drama filmed on a multi-million dollar set? Check. Political plotting and the breakdown of an empire? Check. Greed, family betrayal, rape and sexual manipulation? You bet. After three years of crossing seas, roads, and deserts, the explorer and titular star (played by Lorenzo Richelmy) finds himself a prisoner of Mongolian Emperor Kublai Khan, who’s fighting his own brother for power. You think that’s bad? You haven’t met Khan’s wife yet.

US: Seasons 1 and 2 are available on Netflix.

It’s Boardwalk Empire meets The Sopranos. But in Birmingham. The year is 1919 and the post-WW1 streets are ruled by gangsters, chiefly Cillian Murphy’s ultra-violent mob boss, Tommy Shelby. Tom Hardy has a supporting but unmissable role as fellow gangster Alfie Solomons while Sam Neill is the Chief Inspector hired to take down the gang. You can imagine how that turns out. The real scene-stealer, though, is Tommy’s equally ruthless aunt, Polly, who eventually takes over the family business - “Why should the boys have all the fun?” Missing the Mother of Dragons? Meet the Mother of the Mob.

US: Seasons 1-3 are available on Netflix.

It might not have epic battle scenes or the cinematic gravitas of the Iron Islands, and, sure, it’s found home on ITV Encore. But The Americans is not for the faint-hearted or lazy-minded. In fact the espionage drama has so much going on you’ll find yourself glued to every scene and desperate to see more. Keri Russell and Matthew Rhys play married couple Elizabeth and Philip Jennings. Except, they’re actually secret Soviet spies undercover in America during the Cold War and even their teenage kids don’t know. Just watch it.

Winona Ryder is back to her Heathers/Edward Scissorhands best in Netflix’s most anticipated show of the season, and its first proper horror. Paying homage to E.T., Watchers, and Stephen King, the eight-part series is set in a sleepy American town in the 1980s. When a boy goes missing under mysterious circumstances, the entire town goes into crisis. His mother Joyce (Ryder), all shook up and intent on finding him, takes matters into her own, axe-wielding hands. Expect conspiracy theories, kids on bikes, and weird apparitions.

UK: Season 1 is available on Netflix.

US: Season 1 is available on Netflix.

Original creators Joel and Ethan Coen gave their blessing for this TV adaptation, and came on board as executive producers, so you know it’s good. Like the movie, it’s set in Minnesota and features well-meaning cops, gruesome murders, and oddball characters a-plenty. Martin Freeman is insurance salesman Lester Nygaard who wouldn’t hurt a fly until he bludgeons his wife to death, and unwittingly ends up in debt to contract killer Lorne Malvo (Billy Bob Thornton). The sheer bonkersness of it is so appealing you’ll likely burn through the series in one sitting.

US: Season 1 is available on Hulu.

Aka, the sleeper hit that scooped the Golden Globe for Best TV Drama last year, prompting millions to binge-watch the entire 2 seasons. Elliot (Rami Malek) is a genius computer hacker by day and virtual vigilante by night, who reckons he can hack the horrible crime out of New York City. ‘Course he does. Meanwhile, Christian Slater is Mr Robot himself, both charming and untrustworthy. He wants Elliot to join his organisation. The premise couldn’t be further away from Game of Thrones, but if it’s nail-biting cliff-hangers and high-octane drama you’re after, it’s a fair substitute.

UK: Seasons 1 and 2 are available on Amazon Prime.

US: Seasons 1 and 2 are available on Amazon Prime.

If you haven’t heard of Robert Kirkman, you may have heard of the moderately successful show he wrote, The Walking Dead. In his new show, Kirkman swaps the undead for demonic possession. Kyle Barnes (Patrick Fugit) has experienced demons tapping into his psyche since he was a child. He’s fed up and wants a cure. Enter Philip Glenister as Reverend Anderson, an eccentric evangelist who believes in unworldly forces. Kyle goes on a journey of self-discovery that’s as disturbing as Tyrion Lannister on a killing spree. While Westeros is on hold, you can more than make do with supernatural spooks in the American South.

‘Welcome to Wayward Pines’ reads the highway sign before a car crash and explosion leave Secret Service agent Matt Dillon stranded in a seemingly peaceful American town that – surprise! - conceals a magnitude of sinful secrets. It’s directed by M. Night Shyamalan and written by brothers Matt and Ross Duffer, just before they created Stranger Things (see above), which has a not-totally dissimilar setting. The cast are a fantastic mish-mash of Hollywood elite including Carla Gugino, Juliette Lewis, Terrence Howard Melissa Leo, and Toby Young, making for truly compelling viewing.

UK: Seasons 1 and 2 are available on Now TV.

US: Seasons 1 and 2 are available on Hulu.

Anything that gets Lady Gaga a Golden Globe and has Jessica Lange delivering such belting one-liners as: “Let me give you a fair warning: I’ll always win against the patriarchal male,” is worth a view. Each series of AHS follows a different story entirely - but all are as creepy and disturbingly good as the last. Ryan Murphy puts together a wonderful cast including Angela Basset, Kathy Bates, Chloë Sevigny, Connie Britton, and Wes Bentley. Brash, violent, and sexy, perhaps it’s not that different to Thrones after all?

UK: Seasons 1-4 are available on Netflix.

US: Seasons 1-4 are available on Netflix.

Forget Captain America’s Bucky and Jason Bourne, it’s time for a new amnesiac hero to take to our screens. Our protagonist, Jane Doe, wakes up in Times Square naked, cashless, covered in tattoos, and with no memory of her past. *cough* We’ve all been there *cough*. But things get really weird when the FBI get involved and criminal conspiracy theories abound as she tries to unravel her identity. It stars Thor’s Jaimie Alexander in her first major role, but she’ll have you asking ‘Game of what?’ in no time.

US: Season 1 is available on NBC.com.

This 19th century horror-drama (hor-dram?) stars Eva Green, Josh Hartnett... and Frankenstein’s monster; stay with us now. As original ideas go, it beats even Thrones. In Victorian London, various famous fictional characters, from Dorian Grey to Victor Frankenstein, are called upon to fight an onslaught of vampires. Green is fearless heroine Vanessa who, in the first episode, enlists the help of a dashing American to solve a gruesome murder. Three glorious series are still up for viewing grabs on Sky - and grab them you must - but if you think this is one for the Poldark crew, you’re wrong, this show is dark. Very dark.

US: Seasons 1-3 are available on Netflix.