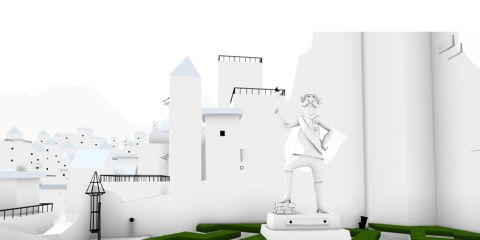 Games have conditioned us to expect and follow a checklist of objectives. But from its onset, The Unfinished Swan bravely defies this traditional framework. While it has an overarching goal, it’s a game propelled by discovery, thrusting you into an abstract world that is simultaneously full of substance and empty of everything. Your initial encounter with it may be confusing, as the starting area consists solely of an enveloping whiteness that stretches as far as the eye can see. Only by throwing balls of black paint can you discover its scenery and wildlife and begin to gain a sense of direction. While this is initially an intimidating--and at times exhausting--concept, the world and mechanics continually evolve, ultimately resulting in one of the strangest and most interesting games you’ll ever play.

The Unfinished Swan doesn’t begin with a sizzling cinematic introduction or overwrought narration. Instead, it presents a wonderfully sincere fairytale of sorts about a boy named Monroe who has lost his mother. Armed only with his mother’s silver paint brush, Monroe soon steps into a magical world in pursuit of a half-finished painting of a swan brought to life.

Paint is always the tool with which you’ll interact with the world. It is, in a sense, your eyes in a place where you are initially blind. Launching black paint against a pure white space uncovers the environment within. This mechanic beautifully captures the sense of wonder that comes with exploring the unknown, and there’s a ton of detail hidden in the emptiness. How much you see is dependent on how much you want to see--the trick is figuring out how much paint to use to unearth the world’s secrets. You may be tempted to toss tons of paint to unveil pathways and scenery, but coating any area too heavily ends up blotting it out with darkness. In practice, this factor makes the use of paint somewhat strategic, as it can both expose and eclipse the entities residing within each setting.

Admittedly, trying to make sense of an invisible world can be frustrating, and you’ll likely get turned around a time or two while trying to figure out where to go. And while The Unfinished Swan is built around a novel mechanic, simply tossing paintballs at nothingness alone gets boring after awhile.

Thankfully, there are a few variations in the color and purpose of paint, which eventually transitions from a tool of sight to a tool of manipulation. Blue paint acts kind of like water, allowing you to feed vines and dictate a path along which they’ll grow. Using these vines as a ladder or to scale a giant chasm is often the only way to proceed or find secret collectibles. It’s never painfully obvious that this is something you can do, and to its credit, The Unfinished Swan does a great job of providing you with the necessary tools while still allowing you to discover on your own how to use them.

As paint mechanics evolve, so too does the setting, keeping The Unfinished Swan from feeling too familiar or stale. While the world is initially an invisible one, it begins to materialize as you progress. Levels are eventually built around solving simple but enjoyable puzzles, and each chapter is nearly perfect in length, always shifting before overstaying its welcome. Some levels provide a glimpse at the astonishing scale of the magical kingdom Monroe stumbled into, while others place you in bizarre flashback scenarios. Some sequences are even downright creepy. A level that takes place at night will have you running from murderous beasts under the shadow of panic-inducing darkness. The only indication you’ll have of their proximity is the red hue of their demonic eyes and Monroe’s rapidly-beating heart.

Each segment is further supplemented by The Unfinished Swan’s wonderful musical score, which does a fantastic job of providing a sense of physicality to a world you can’t always see. Sometimes it’s cheery, mimicking the sense of awe felt from looking down at a black-splattered kingdom from atop a high tower. Other times, its brevity and urgency make frightening monsters all the more terrifying. The music always acts as a lens into Monroe’s state of mind, and in a game that will sometimes leave you feeling a bit blind, it helps build an understanding of each location you’ll inevitably uncover.

The Unfinished Swan certainly isn’t a one-size-fits-all experience. Some may find issue with its two- to three-hour length, while others may find its focus on discovery to be boring. But there’s a lot to be found in that world made of invisible ink, and for those willing to experiment and approach it with an open mind, the act of uncovering it all is an exciting experience--even if you do have to get your hands dirty with a little paint in the process.