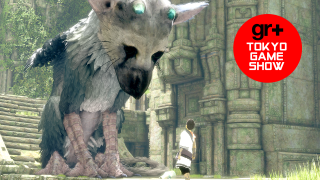 Keep up to date with all the new Tokyo Game Show news, gameplay and trailers here.

I hate that I'm ruining this moment. It's the grand finale of The Last Guardian demo that's currently being shown at Tokyo Game Show, which builds up to the same dramatic sequence shown at E3 2015: the young boy and his giant animal companion Trico scramble to safety as ancient ruins start to crumble beneath their feet. I'm trying to recreate the same tense, uplifting moment from the E3 footage, where the as-yet-unnamed boy helps Trico get his footing before the two leap up to a sturdy ledge. But I'm floundering and flailing, desperately trying to come to grips with platforming physics that feel purposely stiff and a camera that's constantly wrestling with me for control. I eventually make it through, but my ineptitude in this crucial moment has deflated the tension and majesty of such a thoughtfully choreographed scene. I briefly consider if The Last Guardian would be better off without me - if I was spectating in awe like I was at E3, rather than actually playing it (poorly). It's not a great feeling.

It may be that The Last Guardian is tricky to exhibit in small chunks. The section I played for roughly 40 minutes comes from a few hours into the game, when the player has already adjusted to the boy's weighty, beautifully animated movements and Trico's unpredictable nature. Like any real-life pet, Trico doesn't instantly obey your every command; oftentimes, you'll need to coax him into carrying you on his back to reach higher areas within the confines of an ornate, overgrown temple. You may need to call out to Trico multiple times to get his attention, or repeatedly point at where you want him to go to facilitate your exploration or help you solve a puzzle.

Trico's disobedience could very well frustrate impatient players, but I find it to be one of The Last Guardian's greatest strengths. It helps sustain the illusion that Trico is a living, breathing creature with his own quirks and behaviors - a believability that will surely be at the heart of The Last Guardian's emotional adventure. At one point during my demo, when I needed Trico's help to reach the higher platform he was sitting on, he lumbered away until he was completely out of my sight, despite my cries. For a moment, I was overcome by loneliness, until Trico suddenly reappeared as though he had merely been distracted by something in the distance. And I firmly believe this brief abandonment wasn't scripted; it felt akin to the kinds of powerful sensations of bonding or desertion that arise in the similarly unpredictable Journey.

While I appreciate Trico having a mind of his own, I can't say the same for the camera. The Last Guardian's camera has an almost impossible task: trying to frame shots that let you clearly see the tiny boy you're controlling, and the colossal beast that may or may not be nearby, at the same time. To make things even more difficult, the camera has to constantly swivel within the confines of the temple walls whenever you're in an enclosed space - an issue that never hindered the wide-open fields in Shadow of the Colossus, which imparted a similar sense of scale. But a finicky camera is never fun when you're trying to figure out where to go, and it's disorienting when it wants to pan over and show you something of interest in the same moment you're trying to look at where you're going. It's also a struggle to connect with Trico when all you can see sometimes are his eagle-like feet whenever the boy is within petting range.

All I want is to bask in the mystical beauty of The Last Guardian. It may not be a graphical jawdropper - textures can look a bit grainy, and you'll constantly notice objects clipping through one another - but there's a certain magic to your timeworn surroundings, Trico's imposing stature, and the boy's upbeat, youthful aura. I particularly love how the boy excitedly trots around when he's at full sprint, an animation that looks straight out of a Studio Ghibli film. But when I'm struggling to find my footing (as in the finale), perplexed at what I'm supposed to do to proceed, or playing tug-of-war with the camera, it feels like I'm actively impeding The Last Guardian's efforts to show me something wonderful. This conundrum of crafted moments comes up all the time in games: the delicate balance between delivering the full impact of a carefully scripted scene, while still giving players the freedom of control. But when these moments go wrong, it always makes me wonder whether the problem is with me, or with the game.