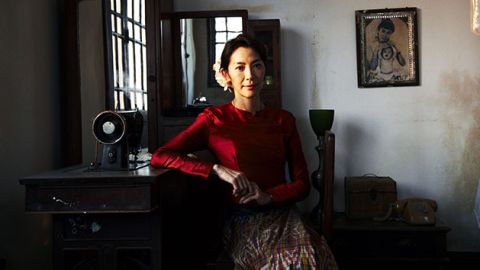 There’s no question that the jaw-crashing story of Burmese activist Aung San Suu Kyi deserves telling. Winner of the 1991 Nobel Peace Prize, the wife and mother became a symbol of the struggle for democracy in her own dictatorled country after enduring 15 years of house arrest and separation from her family.

Still, supporters of “the female Mandela” must be mildly dismayed that the director tackling her onscreen story is Luc Besson. If the Frenchman knows style, spectacle and strong females (particularly in 1999’s Joan Of Arc ), he’s less acquainted with subtlety, which Rebecca Frayn’s ambitious-but-awkward script certainly requires.

In 1988, mother of two Suu Kyi (Michelle Yeoh) is living in Oxford, married to kindly Tibetan studies academic Michael Aris (David Thewlis). Called back to Rangoon to attend to her sick mother, her visit coincides with an outbreak of violence and she chooses to stay on – a decision that ultimately leads her to front her native country’s National League for Democracy.

As she rises in popularity, the authorities decide they can’t risk martyring her, so she’s imprisoned in her own home, cut off from husband and sons, who anxiously await news back in Oxford. It’s this domestic angle that works best, with Suu Kyi forced to choose between family and country.

But The Lady is also extremely clumsy. At times, Thewlis plays Michael like bumbling Yellow Pages icon J.R. Hartley (unaided by two scenes where he plays his jowly twin brother too). Meanwhile, a committed Yeoh is rarely given licence to get under Suu Kyi’s skin, leaving her a platitude-spouting figurehead. At best, it’s a superficial survey of a remarkable woman.