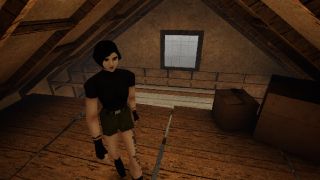 We're in the golden age of the retro demake, taking new games and making them look like they came out 20 years ago. But what if somebody took all those fuzzy memories you have of being way too scared of actual old PlayStation games and let you play them all right now?

They did, and they called it Haunted PS1 Demodisk 2020. While your typical non-haunted demo disk would come bundled with a new system or packed in with a magazine, this one is so haunted it could only be contained on Itch. Even if you don't have time to submit yourself to the virtual frights firsthand, you should at least check out the super '90s, in your face trailer.

Alright, it's not literally a PS1 disk (though it definitely is haunted, just feel that energy). It's a bundle of short indie horror games for PC that each reflect the creepy old PlayStation game aesthetic in their own way. They're bite-sized morsels that are perfect for giving yourself a quick case of the willies before moving on to the next one. I played through both Heartworm, which is a Silent Hill-inspired third-person adventure, and Ode to a Moon - Lost Disc, which is a first-person exploration game of dreamlike dread, in about 20 minutes and I'm excited to try more of them.

The best part is that this really is a legit demo disk: on top of the over-the-top menu screen with freaky music to set the mood, several of the games inside are teasers for full games that are in development right now. You could call it a mixtape of fuzzy polygonal playable teasers, but I think the name Haunted PS1 Demodisk 2020 already pretty much nails it.

Find more thrilling chills before they getcha in our guide to the best horror games.