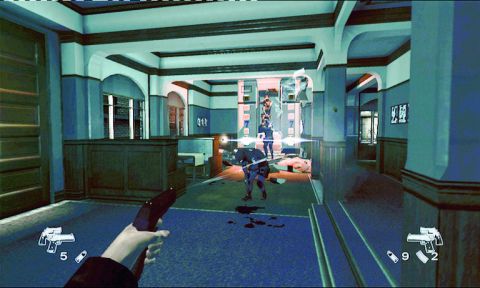 Boxes are scattered around the apartment, evidence that your girlfriend Jenny has only just started moving in. She's surprised you with a birthday cake and - even though you've tried to warn her that you kill people for a living and your former boss is out for your blood - she shrugs it off as a bad joke. Motioning you over to the couch, she kisses you, leans her head on your shoulder and gradually falls asleep as the two of you watch TV.

It's not what you'd expect from a hyperviolent shooter, but it's calmer moments like this - fully playable and wedged in between the dual-pistol executions and power-drill torture scenes - that help elevate The Darkness from a simple action game to something much more engrossing. Sure, you'll spend a lot of time blasting your way through legions of gun-toting thugs and using dark powers to tear them apart - but The Darkness isn't all action, and the parts that aren't make the rest seem more real.

As Mafia hitman Jackie Estacado, you'll spend most of the game wandering around a big, semi-open mockup of Manhattan, talking to people and trying to stay one step ahead of your ex-boss, who wants you dead for failing to collect on a debt. Surviving means you'll have to take out all the goon squads and small armies of corrupt cops he sends after you, as well as doing favors for other family members in return for them helping you out.

The game gets much, much more complicated and compelling than that initial setup, though, beginning with Jackie's lucky-but-troublesome possession by a demonic force called The Darkness. Having the demon on his side puts all sorts of cool diabolical abilities at Jackie's disposal, but it doesn't have his best interests in mind, as the story - which packs merciless emotional punches - will soon reveal. In the meantime, though, The Darkness manifests itself as a pair of dragon-like heads on either side of you, but they don't last long in the light - any light - so when you're in a fight, you'll need to shoot out every lightbulb you see if you want them on your side. And you do, because those twin serpents are the other thing that elevates The Darkness above being just another pretty shooter.