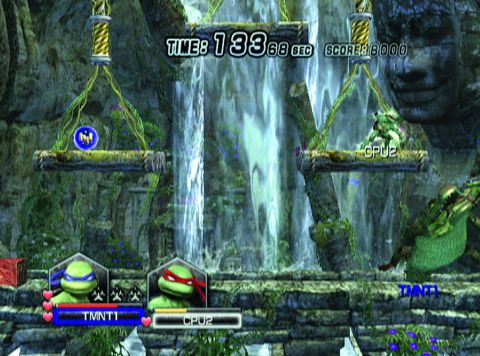 Rats are put on earth for two things: spreading disease and starring in Pixar movies. It seems Splinter didn’t get the memo. The pet of ninja Hamato Yoshi, he spent his days observing his master’s martial arts, mimicking routines he would one day pass on to his amphibious acolytes. Developer Game Arts did much the same. Brought in as day labour on Smash Bros. Brawl, they studied Masahiro Sakurai in full swing – but does Smash-Up ever go beyond mere mimicry?

Brawl’s sticky fingerprints are everywhere: in the multi-tiered arenas scaled with floaty double-jumps, in the quick-rolls and air-dodges, in Casey Jones’ hockey stick thwack (a direct copy of Princess Peach’s golf club thrash), in the trophy shooting gallery, fire flowers, menu design, musical cues, platforming minigames and 50 narrative-driven event missions. Hell, even Brawl’s booming announcer has been defrosted to yell names at the top of his lungs.

However, where Splinter’s learning went beyond surface details – observing Yoshi’s codes of conduct and core ideals – Game Arts embrace Sakurai’s design on a more superficial level. Cute touches and packaging are toppings on an undercooked pizza base, one congealed from too long a time in the delivery boy’s rucksack. The cheese and tomato in this tortuously overdone analogy? That would be the combat itself.

Moves are designed to tick the ‘cool’ box with little to no consideration for practicality. Donatello’s bo staff twirls and Shredder’s lightning-charged sword (er, yeah… that one) may have been fun to program, but they’re all flourish and no function. The wind-up on attacks pins characters down – it often feels like two static opponents taking it in turns to bonk one another over the head with logs. Imagine a Smash Bros where every character is Bowser, and you’re roughly there.

Jarringly, if their moves feel like Bowser’s, their movement is more like Fox McCloud’s – zippy and agile, bolstered with tremendous wall-jumping abilities. Jump into a wall and you’ll cling. Tap up and you’ll climb a few metres; press attack and you’ll torpedo across the stage. They feel like platforming characters in a way Brawl’s roster didn’t (as emphasised in the Subspace Emissary), and yet their maneuverability is burdened with rigidly close-combat scrapping.

By swapping Brawl’s ring-out mechanic for old-school health bars, the characters’ physicality – and the large stages in which they express it – feels obsolete. Fundamentally, they’re not going anywhere unless this nunchuk goes in that face – does it matter which part of the Manhattan skyline this occurs in? Four players can give the space more purpose, but the action still clumps together thanks to the absence of ranged attacks.

There is an exception. A few stages feature insta-kill scenarios, welcoming a much needed dash of malice into play. The jungle and sewer stages have a brilliant crocodile intruder, pouncing on any ground level fool when an alarm sounds. The scramble to send a rival-shaped snack downstairs is funny as hell (we were told off for disturbing colleagues with our hoots), even if the sight of April’s broken body in the beast’s maw is a tad disturbing.

But multiplayer also raises our biggest heckle: how incongruous the cast feel. Promoted as a 25th anniversary TMNT celebration, it’s worryingly lacking in homage. Playground riots used to break out over ‘who’s the best Turtle’; here, they’ve had to add a coloured glow to help you discern one generic model from the next. Can’t Donatello crack out a scientific gizmo? Where’s Michelangelo’s skateboard? Raphael’s Nightwalker persona would have made a great Zelda/Sheik tag team.

Signature moves are the bread and butter of beat-’em-ups. Imagine Street Fighter with only Ken. You can’t? Well Smash-Up will imagine it for you. Everyone fights at close quarters. Everyone has identical moves. Everyone has the same wall-jump – yes, the hulking Ultrominator is as nimble as a sewer rat. To top it off, they’re all based on their universally rubbish modern cartoon iterations – dark and sleek, April and Casey may as well just be Foot Clan soldiers. Shredder and Karai are just Foot Clan soldiers. Four Turtles, five Foot Clan and a rat? Happy 25th anniversary, Turtles. You deserved better.