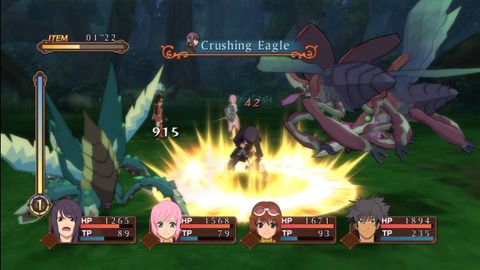 Tales of Vesperia is everything you’d expect from a Japanese role-playing game: sprawling dungeons, monster encounters and stuff about saving the world. It’s also everything you’d expect from a Tales game: epic story, angsty anime characters and drop-in, drop-out co-op. But this isn’t your granddaddy’s Tales of Symphonia with its namby-pamby plotlines and romantic relationship system; this is the Tales series all grown up and in living color. There are a few throwbacks to the primordial sludge from which it evolved, but overall, Tales of Vesperia is everything you’d ever want from a next-gen JRPG – and quite a bit more.

The story follows former knight Yuri and naïve princess Estelle on their quest to warn their friend Flynn of a plot on his life. There’s a lot of noise about a magical substance called “blastia” that does everything from powering magical swords to purifying drinking water; and stuff about the Rizomata formula that has something to do with why Estelle is the only person in the whole cast who doesn’t need to use blastia to perform magic. Yuri and Estelle’s quest evolves into a bigger quest about bringing blastia thieves to justice, which then becomes a dungeon-long meditation on the uses of blastia in civilization that then turns into – you guessed it – a quest to save the world. The plot is loaded with twists that’ll surprise even the most jaded JRPG fiend; and though the character models always remain cutesy and wide-eyed, the story deals with some pretty heavy stuff (ritual suicide, insecurities about bouncing breasts, etc.). The ESRB isn’t kidding when they say this is T for Teen.

The combat stays true to the Tales games that pioneered the action-RPG genre with non-random encounters and free-running combat where all you have to do is button mash to win. Vesperia updates this by incorporating a battle-grading system where you get more points for being strategic (y’know, guarding and stuff); and it includes a way to key artes (magic attacks) to both the right stick and the left stick so you don’t have to stop and scroll through menus to change artes mid-battle. You still have to stop and scroll for items, though, and again when you want to change targets. But it makes sense at least for changing targets because the fighting view has evolved from 2D to 3D with a new camera scheme. It’d be difficult for you to track every available target in the battle while they’re all running around in different directions, so freezing combat long enough for you to find them isn’t a bad idea.

Sadly, the control scheme didn’t evolve with the camera. The game still forces you to target only one enemy at a time and any movements you make are tied to that target, unless you’re holding down the left trigger to free-run. For example, you’re targeting an enemy in front of you – you press left on the analog stick and run for him. He moves to your character’s left (that’s “above” you on the field) and the camera pulls back. If you try to press up on the stick, you’d think that you would run “up” on the field to keep attacking – but instead, you jump, because up on the stick equals jump. If you want to get that guy that went above you, you’ve got to press the stick left or right so your character wheels around to run for him. It’s almost like you’re actually fighting on a 2D field that only looks 3D. This gets worse as you include other players in multiplayer, because the camera zooms way, way out to get all of you on the screen at once.

Once you get the hang of it, the combat works fairly well. Your friends can jump into fights with you by picking up other controllers and pressing the Back button to activate manual mode – and if they suck, they can press it one more time to trigger semi-auto mode where their character will automatically run towards a target without any input with the analog stick. Be aware that holding down the trigger to free run doesn’t work in semi-auto mode and the battle-grading system only awards points for players playing on manual. Not to mention without free-running, you can’t really dodge or get behind the enemies to increase your chances of doing critical damage.

Tales of Vesperia is a little harder than other action RPGs of the day. The difficulty scales up pretty steadily, though, and there were only two parts where we had to stop and grind in order to beat a boss. One of them was that awful demo level where the available grinding area is way too small, and the boss is ridiculously tough. You can change the difficulty of encounters from the menu when you’re not in battle – easy really is easy and hard is balls hard, to Vesperia’s credit. There’s also a strategy editor available in and out of combat so you can instruct your AI how to be less stupid during battles. We cannot tell you how much this comes in handy when your healer has gone and blown all her TP (magic gauge) and keeps requesting to use items to feed her addiction (tap the left button to say “denied, bitch!”).