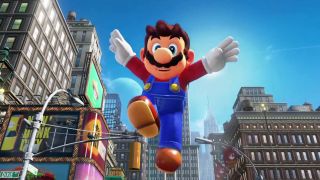 Mario is who he is because of his mobility. The worlds he explores are always colorful, charming, and challenging, but they wouldn't mean a thing if traversing them didn't convey a sense of momentum and flow, of controlling a character who moves with palpable weight and inertia. It's something you feel within seconds of starting the original Super Mario Bros., and Nintendo has preserved and polished the magic formula of Mario's movement ever since, miraculously translating Mario's distinct 2D handling into the gold standard of 3D platforming. That ideal sensation of total control has yet to be topped - even by Nintendo itself, if you ask me. But it looks like Super Mario Odyssey on Nintendo Switch could change all that, reinventing the immaculate wheel that is Super Mario 64's movement.

I realize I'm over two decades late to this party, but after years of on-and-off waffling through the first floor of Peach's castle, I finally hooked the N64 back up, hunkered down with the classic three-pronged controller in hand, and finished Super Mario 64 with all 120 Stars. And despite the aging polygonal graphics, an at-times atrocious camera, and some truly confusing Stars, I'm now convinced that it's the greatest 3D Mario to date due to the sheer purity of its movement mechanics and, in turn, its overall game design. Running and jumping may be the basic building blocks of Super Mario 64, but they're combined in such complex, complementary ways to create a double helix of perfect 3D movement. Controlling Mario exactly the way you want is paramount to mastering the game, and between all the hops, kicks, triple jumps, long jumps, wall jumps, backflips, somersaults, and more, there are near limitless possibilities for overcoming obstacles and reaching your goal, whatever and wherever it may be.

Even having completed every 3D Mario game made since Super Mario 64, I'm astonished by how tight, how quick, and how freeform this initial foundation still feels. And if you look back through the core series, there seems to be a constant straying from the sense of speed and heaviness that Mario moved with in his first 3D incarnation. Super Mario Sunshine's introduction of the water-powered FLUDD jetpack coddled many players by letting them course-correct their jumps by slowly hovering in mid-air. Super Mario Galaxy's Spin move is less forgiving, but still tempers your fall to help you pinpoint your landing with the fleeting floatiness of a feather.

In comparison, Super Mario 64's jumps all instill an exciting, sometimes anxiety-producing sense of finality, like dropping a bowling ball over a ledge. Even after hours of play and coming to grips with Mario's physics, there still might be that millisecond-long moment during a leap where you wonder whether or not you've hit your mark. When you finally do, it's magical - and over time, your confidence builds up and up until you're stringing together Olympics-worthy acrobatic sequences almost absentmindedly as you move through the world. Back in the day, I never would've dreamed that I could pull off a triple-jump towards a tiny platform and just barely land atop it with a last-minute mid-air kick, or cartwheel flip into a sequence of wall jumps after turning on a dime. Striving for every last Star forced me to get comfortable with these complicated combos, but what amazes me is how they were always there from the start, ready to be incorporated into my platforming from the get-go if I had possessed the necessary knowledge or skill.

Going hands-on with Super Mario Odyssey has thus far been a privilege reserved for Nintendo employees, but its debut trailer makes a point of showcasing classic movement mechanics in quick succession. Against the backdrop of New Donk City - an alternate universe version of the Big Apple where cab drivers calmly cruise around at under five miles per hour and will gladly stop for pedestrians - Mario's jaunty leaps all convey that same sense of mass inherent to Super Mario 64. It's one classic move after another: triple jumps onto cars, wall jumps between adjacent buildings, a long jump off a skyscraper that would surely prove fatal for any mere mortal. In the desert area, Mario quickly descends a sand dune with a Sonic-esque roll, and then - be still my heart - some lightning quick, camera-switching proof that Mario can once again perform a downwards dive as he soars through the air. That dive maneuver (which you can see more of in the short clip below) is integral to some of the more showboaty, intricate ways of getting around in Super Mario 64, and its inclusion should work wonders for darting around Odyssey's worlds in a hurry (if you have the desire and skills to do so).

It's also refreshing to see Basic Mario take center stage again. I'm not insinuating that Nintendo's mascot loves pumpkin spice lattes and yoga pants - just that he doesn't look to be bogged down by a need for power-ups in Super Mario Odyssey's exploration. I take issue with the fact that Super Mario Galaxy and Super Mario 3D Land/World put so much emphasis on unique power-ups when it comes to level design, as it takes the player further away from adapting to situations with one fundamental set of abilities. Items like the Fire Flower and Boomerang Flower promote cautious, keep-away play in 3D, where it feels safer and therefore better to inch around levels spamming projectiles at everything that moves. Meanwhile, transformations like Bee Mario, Boo Mario, or Mega Mario all force the pace of your play to slow down, stripping you of the dynamic grace that Mario typically moves with and replacing it with sluggishness or wall-hugging stickiness. The inventiveness of power-ups and the stages that contain them can end up feeling gimmicky, because they're teaching you skills you can't apply everywhere - only in predetermined places when the game ordains them by providing the transient tools you need.

Though Super Mario 64 also uses temporary power-ups, it does so sparingly, and it's telling that two of the three (Wing Cap excluded) are essentially short-lived puzzle solutions rather than long-term changes to your principal control scheme. We've not seen a single power-up in Super Mario Odyssey so far, a clear sign that the constant morphing of Galaxy and 3D World won't inform the level layouts of Mario's Switch adventure. You'll never be punished for missing or losing a power-up, nor will you have to deal with the giveth-and-taketh-away nature of their extra abilities, where you're often left wishing you could perform an action your current form wasn't built to do. Like Super Mario 64, Odyssey gives the portly plumber a baseline of mobility, which should ease players into becoming proficient with his moveset, rather than oscillating between multiple jump control schemes that obfuscate your focus on Mario in his purest form.

That purity doesn't look like it'll be dulled by the introduction of Mario's sentient hat, which he can toss out and use as a makeshift springboard to bounce higher than his normal jump - if anything, this new move should inspire innovative methods of movement you can use at will, unlike the limited water supply of the FLUDD or the finite distribution of power-ups. The fact that Mario can toss out his hat while moving is huge, an intentional bit of design that promotes your forward momentum rather than stunting it - further cemented by the fact that you can simply run into the hat when it's hovering at ground level and it'll boost you up, without the need for an actual jump atop it. The magic of watching Super Mario 64 speedrunners like the legendary Siglemic, seen above, is the way they can take Mario's fixed abilities and move in ways you never imagined, like virtuosos taking ordinary musical notes and combining them into the chords that make up a concerto. The addition of Mario's jump-boosting hat should only strengthen the tenants of Super Mario 64's brilliant design, where the methods for scaling a mountain are only limited by how the player's imagination, intuition, and motor skills all work in tandem.

Shigeru Miyamoto himself has said that Super Mario Odyssey will be "more on the core side" of the series, a return to the tough-but-always-fair structures of Super Mario 64 and Super Mario Sunshine. And though Super Mario Odyssey's sandbox worlds look quite a bit bigger than Super Mario 64's comparatively simplistic playgrounds, both games look to be unified by their devotion to Mario's movement, the guiding force that informs everything else around him. We'll know more when we finally get the chance to play Super Mario Odyssey for ourselves later this year, but already I'm getting that same tingly feeling of mobility possibilities - a sensation that I only tapped into after surrendering myself to the masterpiece that is Super Mario 64.