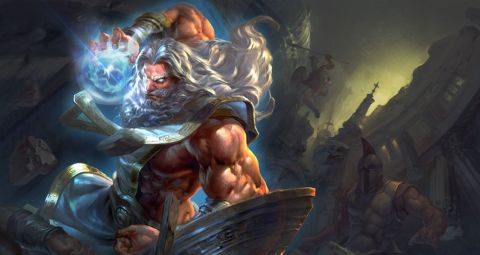 A solid console adaptation of an intricate and rewarding competitive experience, but not without rough edges.

Two teams of colourful fantasy characters - gods, drawn from world mythology - clash over objective-based maps using a mixture of ranged and melee attacks, spells, and special items. Killing enemies earns gold and experience which, in the manner of an RPG, can be spent to upgrade your character's four main powers and to purchase equipment that boosts your stats or otherwise expands your capabilities. Use of abilities is mitigated by cooldowns and your mana pool, which must be managed carefully to ensure that you've got what you need, when you need it. Landing abilities, however, is a matter of skill: whether you are throwing a spear, leaping into battle, or summoning a horde of ghosts, none of that gold and experience means anything if you can't aim.

This, then, is a game about timing, finesse, teamwork, strategy, knowledge, and momentum. Here's an example: as the Norse god Thor, you're beating up some neutral monsters when, glancing at the minimap, you see that two of your teammates are being chased back to a friendly tower by the enemy team. Flanking from the side, you lay down a wall of rock that pins them in place; throw your hammer, Mjolnir, and teleport to it; spin on the spot, downing two enemies in a flurry of blows. The last flees, so you activate your ultimate ability, fly up into the air, Marvel-style, and finish them off with a devastating dive. You've just turned the game for your team!

Another: you're in the support role as Ares, the Greek God of War. You're helping an ally, Apollo, 'farm' enemy minions for gold and experience. On the other side of the line of battle, your enemy is doing the same. Over time, you use a mixture of damage-over-time abilities and face-to-face harassment to force them to head back home to regenerate their health, providing Apollo with space to farm in completely safety. You've also just turned the game for your team!

Smite's free-to-play payment model is one of the best. Without paying anything, you'll have access to every mode and a rotating selection of gods. You can pay up for individual gods, booster packs, and cosmetic skins. You can also, however, pay $30 to unlock every character - including new ones as they arrive. This is a generous way to bypass microtransactions for people who just want to pay once and not think about it again.

Smite is packed with plays like these, from dramatic to subtle, each unique to the gods involved, the players involved, their items, the mode being played, and so on. It's complex, but the way all of these factors spiral out into a fractal web of strategic possibilities is what makes the game so rewarding - and it's well worth persevering until you're able to appreciate it fully.

There's a run of tutorials to help with the basics, bot support, and players-vs-AI modes to ease you in. Which mode you choose also has a bearing on how much you need to learn: Arena is a straight-up brawl, Joust a three-on-three along a single straightforward path. Assault also features a single lane, but gives every player a random god to play. Siege expands that to two lanes with a large jungle area between them, and Conquest includes a full three lanes, even larger jungle, and more objectives. You'll want to work up to that point over time.

Despite the number of characters and skills to consider, the Xbox One version of Smite does a decent job of mapping all of the controls you need onto a pad. It controls like a regular third-person action game, with abilities mapped to the face buttons and items and menus accessed with triggers and the D-pad. It's a lot to take in, initially, but auto-buy and auto-level options smooth the process. The weakness over the PC version is speed: most actions take about one more press than they would on a keyboard, resulting in a slower-paced game.

That steep difficulty curve, however, doesn't always result in the best behaviour from players. Leaving a game midway through in Smite is utterly disastrous for your team, and I've seen it far more often while playing the Xbox One version than during my time with the game on PC. I don't think the intent is malicious, most of the time - it's simply that this is a complex game, it's easy to feel like you've fallen too far behind, and besides, it's relatively normal for console competitive games to support drop-in, drop-out sessions. Smite isn't that type of game, but it seems to be taking portions of the audience a while to acclimatise to that idea.

Besides the inconsistency of its players, Smite's art is the thing most likely to repel newcomers. This was a game designed to run on a wide variety of PCs using an older engine, and it shows: while it looks better in motion than it does in a still image, it's not what you'd call a next-gen game. The spirit of ‘90s comic books survives in its stylised gods and monsters, the art-style ranging from charmingly overblown to off-putting - the game has a real chainmail bikini fixation. I think it's worth persevering with Smite regardless, but it won't be to everybody's taste.

Being free, however, means that there's no reason not to try Smite for yourself. This is the closest anybody has got to making a MOBA that really works on console, and it's exciting to think that there's a huge new audience just now being introduced to this complex, exciting, divisive genre.

A solid console adaptation of an intricate and rewarding competitive experience, but not without rough edges.