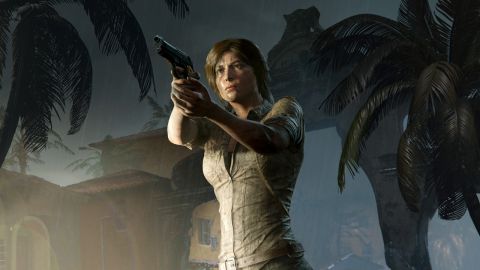 The final and strongest entry in the rebooted trilogy, this adventure sticks to Lara's strengths while embracing its dark side.

I've been in a long term relationship with Lara Croft - for more than 20 years - and honestly things had gotten stale. Even after her 2013 nip and tuck, I was looking elsewhere for my jungle-based murder thrills. Now the old girl has won me back with Shadow of the Tomb Raider using two things I can't resist: sad childhood flashbacks and a distinct horror vibe.

That's right, this Peruvian chapter brings the adrenaline with jump scares, human sacrifice, a monstrous warrior tribe and a Lara that has straight up lost her shit. Remember back in 2013 when people had a minor freakout about the new, younger Lara suddenly slicing throats with nary a frown? That's not a problem for Shadow Lara, who is angry, guilty and trying to literally save the world. You can't make that particularly tasty omelette without breaking some Trinity skulls.

Lara has sort of accidentally set a Mayan apocalypse in motion after racing Trinity to a particular artifact. This starts a chain of events that will take her on a roller coaster ride through Mayan and Aztec mythology with her buddy Jonah (the husky heart that balances Lara's determined steeliness) hunting for yet another artifact that can stop Trinity "remaking the world". Cue guerrilla warfare, scrambling about ruins, and straight up robbing historical sites in the name of just a bit more XP.

The tombs are still the most satisfying part of the Tomb Raider universe, and they're hidden around the world to make even finding them an achievement. The puzzles within them are the worst thing ever... until you solve them when they magically transform into the most perfectly executed puzzles since the Sphinx started spouting riddles. None of them were so complex that I needed a whiteboard, a protractor or a rage quit to get through, but none of them were so easy I felt like I was being treated like the playschool kid that ate glue. Even if you don't do the tombs there are set pieces in the world like 'The Trial of the Eagle' that's an impressive lesson in mechanics, climbing and harnessing the (Disney princess voice) colors of the wind.

The combat reflects new kickass Lara too, with the usual Trinity cannon fodder now subjected to arrows made with the venom of spiders (sending them in a friendly fire frenzy) and being strung up from the trees like beefcake windchimes. You can go in guns blazing, but you won't have much fun that way, the real thrills are to be found in covering Lara head to toe in oozing jungle mud (which camouflages and protects our heroine from being spotted with thermal goggles that can render plant cover useless) then picking off enemies one by one, booby trapping some of the corpses, but looting all of them for spare change and ammo.

A slightly disappointing, yet beautiful, world

In slightly shorter supply are your other foes, all of god's creatures great and small. You get a big XP boost for hunting, which can also provide you with hide and fat for crafting, so early on you realise shooting every howler monkey, bird and wolf that strays into your path really pays off. Not frogs though. From what I can tell pumping Mr. Jeremy Fisher full of arrows gets you nothing but a really pathetic looking corpse and a sense of sickening guilt. Early on you'll fight some leopards - a fight the game fumbles by awkwardly swapping between cutscene and action - and later on locals you meet on your adventure will ask for help with wolves, or direct you to another big cat that needs assassinating. This isn't hunting on a Far Cry 5 open world scale, and I wish there was more of it, but it at least adds to the sense of menace and opportunity that makes the jungle such a promising playground.

When you're not knee deep in ferns, jungle mud and dead animals, you can stop off at a town to head to merchants for new weapons, bag upgrades and resources, and pester every local that looks willing to make eye contact until they drop a vague hint about the location of some treasure or ask for help finding a lost friend, a special horn or, in the case of a small boy who was lucky he didn't get slapped round the back of the head because I am trying to prevent an actual apocalypse here people, a lost dice. Again, the towns felt lively and were a nice change of pace, but it was too easy to miss out on the side missions as the game pushed you through the main story. Too soon I hit that standard warning that if I continued the story I wasn't going to be able to fast travel for a while, a sure sign that I needed to make sure I was done hanging around the canopy shooting pretty birds and harassing the indigenous people.

A cheeky touch of Nathan Drake

The game has borrowed shamelessly from Uncharted in both the childhood Lara scenes and the pace of the "running from a disaster while the terrain falls away like wet tissue paper" sections and do you know what? Girl is working it. There's no doubt Tomb Raider influenced Uncharted back in the day, and now Uncharted is returning the favor. As a player I wish more games would learn from the best of their genre, and Shadow of the Tomb Raider is a better game for it. It doesn't have the humor of Uncharted, I think the only time I cracked an actual smile was when I accidentally got Lara eaten by piranhas, but what it lacks in comedy it makes up for in horror.

I'm no nervous Nancy when it comes to horror, but the game managed to get a few good jumps out of me, and one set of enemies you meet about halfway through are genuinely disturbing. They way they looked, moved and raced at me out of dark corners made me feel tense and edgy in a way that I'm more used to feeling with survival horror. I stumbled through that section genuinely hoping not to see another, and panicking my limited shotgun ammo. It's a strong thread in the story too, rather than a cheap throwaway scare, and will stay with me more than any other moment in the rebooted trilogy.

So Lara has changed this time around, but you're still going to get all the things you want from her. Battling man and beast with a bow and arrow (or a gun, if you want to be a basic bitch about it), doing some serious business with a climbing axe, a grappling hook and increasingly ridiculous rock formations, and puzzles that will poke at the grey slimy stuff between your ears. It'll be interesting to see where Square Enix can take my girl next, but they've done her proud this time around.

Shadow of the Tomb Raider

The final and strongest entry in the rebooted trilogy, this adventure sticks to Lara's strengths while embracing its dark side.