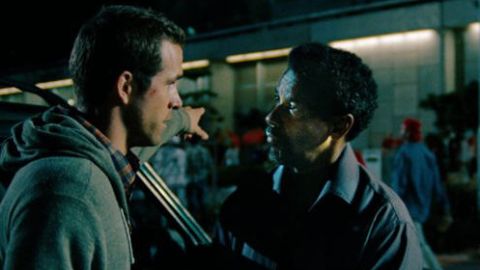 Midway through Denzel Washington’s latest thriller, his character – rogue CIA operative Tobin Frost – is described as “the black Dorian Gray”. And it’s true: the 57-year-old really doesn’t look much different from when he got his first Oscar nod 25 years ago for playing Steve Biko in Cry Freedom .

Though set in South Africa, the 1987 film had to be shot elsewhere due to opposition from the country’s Apartheid regime.

This time, the double Oscar winner finally makes it to Cape Town, thanks to Swedish director Daniel Espinosa, a script by David Guggenheim plucked off the infamous “black list” of unproduced screenplays and the collapse of a shameful system DW can claim a small part in consigning to history.

The irony is the city’s vivacity is largely lost on Matt Weston (Ryan Reynolds), a low-level CIA “housekeeper” at one of its many secure locations who spends most of his time alone, bored and staring at walls.

That all changes when Frost – on the lam from gun-toting bad guys pursuing intel he has obtained from MI6 spook Liam Cunningham – strolls into the local US consulate requesting asylum.

This brings him into Matt’s orbit, his safe house the natural place for the renegade spy to be interned, interrogated and gently tortured by Robert Patrick’s grizzled veteran.

Or it would be, if it wasn’t promptly raided by Tobin’s pursuers in the first of numerous noisy set-pieces. (Espinosa loves the sound of heavy artillery in confined spaces.)

Several stiffs later and Safe House is where it needs to be: on the townships streets, with Reynolds forced to play reluctant nursemaid to Washington as he tries to work out who’s trying to kill them and whether he should ever tell French girlfriend Nora Arnezeder ( Paris 36 ) what he really does for a living.

This isn’t the first time we’ve seen Washington required to play a seasoned mentor to a callow rookie (see also Training Day , Unstoppable and The Bone Collector ) and, thanks to Man On Fire , Déjà Vu and a few other movies that weren’t directed by Tony Scott, he’s also had much experience in ass-kicking, pistol-packing and other staples of high-octane action cinema.

But if there is ever a sense here that he’s simply marking time until the next personal pet project or sold-out Broadway run, it’s more than made up for by the effortless self-confidence and commanding brio he brings to the material.

It’s nice, too, to see him flirting with villainy again, Frost being a thoroughly enigmatic customer whose motivations – beyond giving his minder the slip whenever the opportunity arises – are never made clear. With a tad more humour this could easily have been a Southern Hemisphere Midnight Run .

Strangely, though, Reynolds dials down his customary insouciance as the earnest novice, projecting a nervy, sweaty desperation throughout that makes us ponder why he ever thought espionage was a suitable career.

Given how much the film depends on the cat-and-mouse relationship between its leads and the grudging respect they come to have for each other, it’s a shame they couldn’t have been more evenly matched.

Yet the supporting actors help to make up the shortfall, Brendan Gleeson, Vera Farmiga and Sam Shepard popping up at various stages as Ryan’s CIA higher-ups and Rubén Blades turning in an affecting cameo as a forger friend of Washington’s who now puts family ahead of black ops.

Talk of the Town

Cape Town itself provides an unfamiliar setting that generously serves up a variety of arenas for mayhem.

An early car chase on its bustling thoroughfares is matched later by an electric stand-off at a packed Green Point stadium, while the corrugated roofs of the sprawling Langa shanty town prove ideal for jumping on and off during a frantic foot pursuit.

From the guttural Afrikaans Reynolds fleetingly adopts to the vuvuzela cacophony that accompanies the soccer stadium scenes, there’s a distinct aural texture that makes Safe House feel fresher than average.

All that’s missing is an indigenous castmember, Espinosa spurning the chance to bring a native talent to the fore, like District 9 did with Sharlto Copley.

“I like games!” grins Denzel at one point, which is handy given this basically amounts to an extended bout of hide-and-seek. Yet if we never feel that there’s much at stake, that doesn’t prevent Safe House being a solid property built on firm foundations that’s worth a visit if you’re in the area.